It started as a typical business travel morning for Nils-Andreas Haagenrud, Director of UAS-US programs. After arriving the night before in Montana for a training event, he went downstairs to the hotel gym for a quick workout.

That’s when the naked man came sprinting past the windows.

Taking off from the same hotel, the man, who was high on narcotics, was making a run for the thick brush on the opposite side of the road. Fellow Teledyne FLIR employees Aaron Kozikowski and Tanner Key had just arrived with training equipment and were unpacking the truck when they noticed local law enforcement setting up a perimeter right outside the building. After a few moments of wondering who or what law enforcement could be looking for, that’s when they saw the stripped suspect make a dive into the nearby bushes.

“Do we have SkyRaider?” Aaron asked. Tanner confirmed and jumped to begin setting up UAS system in the back of the truck while Aaron checked with police on whether they could use the air support.

“Do you need a drone with thermal capabilities?” he asked the officer in charge. A few moments later the team, including Nils who finished his workout by racing over to assist, were all meeting at the front of the perimeter. Although the customer testing and demo R80D SkyRaider unit wasn’t mission-ready, Tanner’s quick thinking and configuring saw the system up in the air in a matter of minutes. 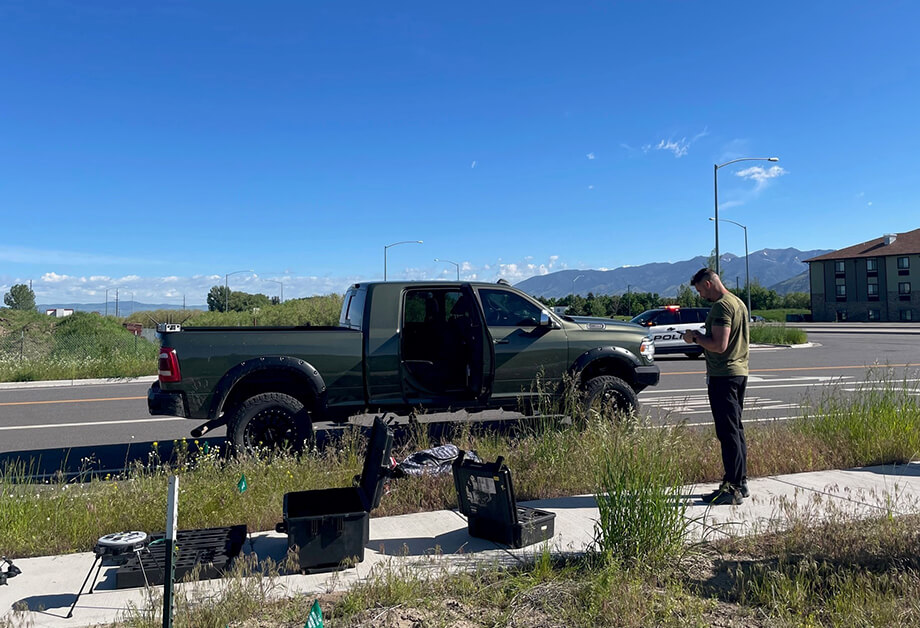 The suspect did not immediately appear in thermal, but Tanner proceeded to fly the SkyRaider low along the bushes in order to “spook” him into moving along. The unexpected UAV visitor did succeed in chasing the man out of hiding, and as he made an attempted escape, he began showing up on the camera.

Soon after, Tanner began picking up very small, very light movements in thermal. He navigated the lead detective to the presumed location, and the officers found their suspect. The reason he’d been so hard to spot was because he’d moved into a small creek running down beyond the brush and was submerged except for a small bit of his head sticking up out of the water. In the brisk Montana morning cold and frigid mountain run-off, the desperate last-ditch effort to avoid capture was only outmatched by the Teledyne FLIR Defense team and law enforcement’s determination.

After the situation was mitigated, the police stated that they would have taken a long time to find him if it wasn’t for the thermal on the UAV, and with the UAV they had full control over the suspect, they didn’t need to risk going in without having overwatch, and they didn’t need to request backup from the K9.

The entire team received a big thank you from the Police and proved that even in the strangest, most unexpected scenarios, we are truly ready to respond to Any Threat Anywhere!