The high concentration of salmon raised in cages in fish farms leads to populations of sea lice that can not only injure the salmon, but also become a significant problem for wild salmon in the area who swim past the farms.

Sea lice are considered the single greatest challenge for the aquaculture industry. Every year, millions of dollars are spent on different ways of combating them. Traditionally, lice have been controlled with chemicals and pharmaceuticals, but in the past few years attempts have been made to develop alternative less controversial treatments.

One more ecologically-friendly salmon delousing system has recently been developed by Stingray Marine Solutions (Oslo, Norway). Once submerged in a fish pen, the Stingray system employs a stereo vision system advised by Mestec (Oslo, Norway) to capture 3D images of the fish, after which custom-built image processing software identifies the location of lice on their exterior. Having done so, a laser is then fired from the unit which automatically removes the lice from the fish. 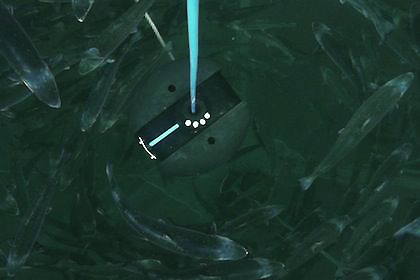 The Stingray system itself comprises a buoy with its own built in winch and cable to which an active Stingray node is attached, enabling the node to be lowered to any specified depth in the water. Power and communications is provided to the system through a second heavily reinforced cable, which also allows the system to be moved to a desired location across the cage housing the fish. A pair of thrusters in the Stingray node can rotate the unit around its own axis, enabling the node to be optimally placed in the pen in relation to the swimming patterns of the fish.

Once in place in a fish pen, a bank of twelve blue LEDs mounted on the Stingray node illuminate a one square meter area of water in front of the system. A pair of FLIR GS3-U3-50S5M-C Grasshopper cameras with Sony 5 Mpixel ICX625 CCD sensors placed horizontally from one another then captures images of the fish at 15 frames per second as they swim past the unit. By comparing the two images, the relative depth information of each of the fish can be obtained.
Because the fish themselves are fast moving and can cover a relatively large distance in a short amount of time, it was important to ensure that the laser beam from the Stingray system was fired with a great deal of precision.

"To accurately locate the position of the lice on the fish in the water, the pair of cameras captures two images of each fish in rapid succession. The pair of 3D images is then processed by the CPU which calculates a velocity vector from which the system can predict the co-ordinates at which the lice on the fish might be expected just milliseconds later," said Steinar Laudal, the Managing Director of Mestec.

Custom-built image processing software running on the CPU calculates the exact co-ordinates on the fish where the contrast in the 3D image indicates the presence of sensitive areas, such as eyes. Once the software locates the eyes of the salmon, these are flagged as a no-fire zone, protecting the eyes of the fish from damage from the laser light.

When the image processing software locates a louse on the salmon, the Stingray system predicts its likely position based on the velocity and direction of the fish. The CPU then sends a command to a galvo-mirror system which is oriented to direct a pulse of a light from a high-powered laser at the precise location of the parasite. The laser then fires a light pulse of sufficient intensity and duration towards the parasite which kills it. If a fish passes by the system with several lice on its body, the system is fast enough that it can identify, and then eliminate several of them per second.

To enable the developers of the Stingray system to monitor the effectiveness of the system, a second FLIR camera was deployed. The FLIR FL3-U3-13S2C-CS Flea3 USB3 Vision camera with a Sony IMX035 1.3 Mpixel color sensor running at a frame rate of 120 frames per second captures images of the fish as they are deloused by the Stingray system.

By logging such images, the developers of the Stingray system can evaluate the effectiveness of the imaging and control software running on the system, and, if necessary, make improvements to it to enhance its capabilities. The images captured by the camera can also be used by a salmon farmer to monitor the behavior and health of the fish in the cages.
According to Mestec' Laudal, several Stingray systems have already proved their worth in Norway where they have shown to be highly effective at lowering the populations of lice in salmon farms. Presently, Stingray Marine Solutions has deployed over thirty such Stingray units across Norway, and plans to ramp up production of the system to more than 100 units per year to meet the increase in demand from customers around the world.

Stingray Marine Solutions AS is based on entrepreneur Esben Beck's patented idea from 2010 for the removal of sea lice by means of camera vision and laser.

It all began in his basement back in 1999. After over 10 years of deliveries to demanding oil, gas and offshore customers, it became natural to start investing in our own products. Beck Engineering chose to establish and develop its own sea lice project, and design, produce, develop software, perform tests and installations at their own premises and based on internal resources.

Stingray Marine Solutions AS is the subsidiary of Beck Engineering, and from 2013 onwards, we will continue to develop the project that has already gained significant recognition from various sources. We are working hard to prove ourselves worthy of the recognition, to ensure that our present and future customers are satisfied with our innovative product.

Mestec AS is a supplier of lasers, electro-optic services and related instrumentation for R&D and industry in Norway.