Despite the advances in computational fluid dynamics (CFD) and flight-simulation programs, when it comes to aircraft and missile designs, no amount of modeling can replace real-world testing. Because full-size prototypes would cost millions of dollars to build and years to develop, aerospace companies use wind tunnels to conduct stability and control, jet effects, captive trajectory, and other tests – often utilizing Schlieren videography, oil flow image capture, and other flow visualization methods to determine the effectiveness of their aircraft designs.

Calspan's Transonic Wind Tunnel is a closed-circuit system for testing scale-model aircraft and subsystems at wind speeds of up to Mach 1.3. To provide the best data to their customers, wind-tunnel operators like Calspan need video recording and photography equipment that can provide peak performance across multiple parameters, including contrast, frame rate, and resolution, at a reasonable cost. Calspan's wind tunnel has several different test setups, depending on customer needs. Each has its own image-acquisition requirements, including three video cameras running at 720p and 60 fps for standing air-flow testing, a fourth video camera for the Schlieren system, and a fifth camera with both video and still image-acquisition capabilities for the oil-flow visualization. 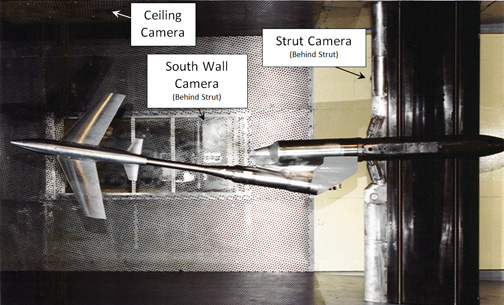 For visual analysis of air flow, Calspan's video from each of the cameras is streamed through a Doremi HDVI-20S HD frame rate and signal converter and Extron HDXP Plus HD matrix switcher for display and recording purposes, overlaid with wind-tunnel data by a VideoLogix Proteus II HD video overlay and recorded by a PC with a GeoVision GV-SDI-204 HD video capture card. Although fluorescent lamps provided ample illumination for air-flow tests, the existing standard-definition camera had difficulties capturing low-light images during oil-flow and laser-vapor screen/Schlieren tests while handling high-dynamic-range images caused by light reflecting off metal surfaces, which created "hot spots" in the video and still images of the airframes under test.

To acquire higher-contrast video and still images at higher frame rates, Calspan engineers knew they had to upgrade the cameras while accommodating the wind-tunnel configuration. The need for low-noise, good low-light capability for oil-flow and laser-vapor screen techniques drove the engineers to consider CCD cameras over CMOS sensors. The distance between the camera and the control room suggested a GigE camera interface that could extend to 100 meters without the need for repeaters or additional power cables. Finally, the engineers wanted to use a single camera for model monitoring, as well as a high-resolution replacement for the aging Hasselblad still film-based camera. After considering several cameras, Calspan engineers replaced all five in their wind tunnel with FLIR Zebra®2 5-megapixel GigE Vision-compliant cameras.

While other cameras offered GigE interfaces and high resolution, the Zebra®2 also offered higher frame rates of 25 fps over a HD-SDI connection, which reduced image flicker and subsequent eye strain. The Zebra®2 provides video that is far superior to Calspan's standard-definition cameras. It takes high-resolution flow-visualization pictures with the same system using FLIR's FlyCapture2  software, which also allows the engineers to adjust the lighting and cameras for each individual camera position and model installation and to remove much of the glare from the metal models under test.

While the current system records video at 720p due to display, overlay, and other hardware limitations, Calspan hopes to move to 1080p soon, thanks to the higher resolution, dynamic range, and frame rate of FLIR's 10/24/2013 Vision-compliant cameras. They also hope to better complement the new camera system with LED lighting.