Land and Houses is a trend-forward mall developer in Thailand. They developed the famous airport-themed mall, Terminal 21. Opened in 2012, the mall has 9 floors with over 2000 retail spaces. Main anchor tenants are apparel retailer H&M, health club Fitness First, SF Cinema City and Gourmet Market, a supermarket of The Mall Group. The mall includes the longest escalator in the world. 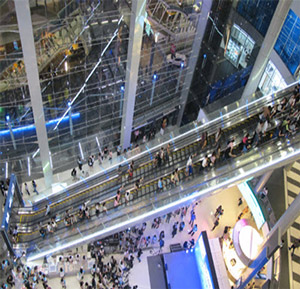 Location is critical to success for a retailer and Land and Houses uses traffic data to substantiate the value of each retail space. Inside Terminal 21 are small side “streets” or lanes that intersect with the main halls.

IMAS introduced Land and Houses to FLIR Brickstream® 3D devices that would allow them to continuously measure the traffic in their malls. Land and Houses recognized their state-of-the-art mall, Terminal 21, could use this technology to their competitive advantage.

The FLIR Brickstream 3D devices are only 66mm x155mm x33mm in size and are mounted in the ceiling of the mall in strategic locations. The FLIR 3D devices use stereo vision analytics to count and track the path of people through the field of view of the device. The devices are able to distinguish between adults and children and identify shopping units such as families.

The patented path tracking technology in the FLIR Brickstream 3D devices make them the most accurate device on the market for behavior analytics including people counting. Unlike devices based on thermal or 2D technology, heat curtains, strollers, shopping carts, luggage, sunlight and shadows do not affect the accuracy of FLIR 3D devices. FLIR devices are powered by Power over Ethernet (POE) and are remotely managed, configured, updated and monitored by FLIR device management software.

Remote device management dramatically reduces the total cost of ownership over systems that are manually configured at the devices themselves. Using FLIR Device Manager tens of thousands of devices deployed around the world can be efficiently managed from a single FLIR device management system.

New malls face the challenge of valuing spaces without the benefit of historical data. The impressive mall traffic figures inside Terminal 21 were key to attracting anchor tenant H&M.

In addition, retailers can also use the same technology as the mall operator within their store space to count people in/out of their store. Measuring people traffic in physical spaces such as malls and retail stores is referred to as “people counting”. People counting is popular with retailers and mall operators in the USA and Europe. With accurate count data retailers are able to compare store performance across their chain and to staff stores according to demand.

As mall competition grows in Thailand, differentiating retail spaces based on visitor data is vital to the success of mall operators. Land and Houses is leading the way by using cutting edge technology to prove the level of traffic to substantiate the value of each of their spaces in the Terminal 21 mall. Discerning retailers will require traffic and other behavior data before finalizing space pricing. 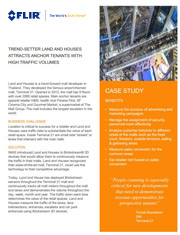