Wembley Stadium requires no introduction. It is a world class venue that attracts some of the biggest events in sport, music and entertainment and more than two million visitors per year. Wembley is the home of the England national football team and was the venue of the the men’s and women’s football finals of the London 2012 Olympic Games. 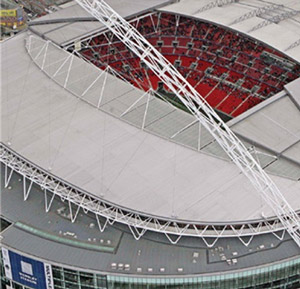 “From a health and safety perspective, how do you know, at a point in time, how many people attending a concert are on your pitch (playing field); especially when they can freely flow from one area to another? This was the challenge which faced the Wembley team in May 2010. The national stadium was keen to allow concert goers to move freely between the pitch and the seating areas, at the same time ensuring adherence to the Safety Certificate, which links the maximum number of people allowed on the pitch to the time it would take to evacuate in an emergency.

Initially, the usual options were considered, such as positioning staff at entrances to the pitch—from the moment turnstiles opened—to count people manually or using PDAs. However, there were concerns regarding the practicality of doing this over a seven hour period with a reasonable degree of accuracy, particularly as the pitch could potentially hold between 20,000 and 25,000 people at any given time. Besides, a manual counting approach is not capable of delivering actionable real-time information.

The IT team explored various automated technologies before selecting a video analytics solution from Nottingham-based Axiomatic Technology Ltd. Axiomatic uses FLIR Brickstream sensors to provide establishments such as large retail outlets, children’s play centres and swimming pools with accurate information on the number of people in an area and rates of entry/exit, in real-time as well as through operational reports.

Axiomatic rose to the challenge and designed a turnkey solution for Wembley. Video appliances were mounted overhead to anonymously track movement across a pre-configured grid. The devices have the advantage of being able to track people in both directions and can be fine-tuned to register counts only when predefined conditions are met. Axiomatic software uses data feeds from the appliances to display flow rates and overall occupancy from each of the selected areas, in real time. The devices typically cover entrance widths of about 4 meters, but can be linked together to cover wider areas.

Axiomatic and the FLIR Brickstream® sensor team collaborated with the Wembley team to get the IT network prepared, the cameras discreetly installed, and the real-time display delivered for use by Event Control. Following a successful pilot where the sensor count data was validated against actual video footage and manual counts, Axiomatic rolled out the solution to cover all 36 vomitories (tunnel entrances) used by concertgoers to gain access to and from the pitch.

From the beginning, the analytics technology has performed flawlessly, providing an accuracy rate of over 95%. Using the flow rate information in conjunction Wembley’s real-time turnstile entry figures, it is now possible to predict how long it takes to fill the pitch, as well as the current location of concertgoers (in terms of those outside the stadium, those on the concourse inside, and the actual occupancy on the pitch). This helps provides the critical insights necessary to ensure compliance with the Safety Certificate and other legal requirements.

Subsequent analysis of the data collected during the event has been used to challenge the original design calculations relating to the maximum number of people allowed to flow on and off the pitch through the specially designed vomitories. The system has also been used to back up what, until now, have only been theories about crowd movement, for example:

“This is an invaluable and unique system which has enabled decisions about crowd management to be based on real-time factual information rather than observation and theory,” says Nick Woodhouse, Head of Wembley Stadium Health & Safety Compliance. “Some of the events we are staging this year would be extremely difficult to manage without this technology.” 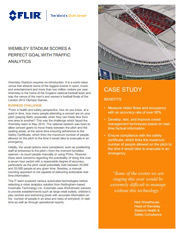