This application note explains the resources available for diagnosing problems that may arise with your USB 3.1 imaging application. The following topics are covered:

We have tested USB 3.1 imaging devices on a variety of host configurations. These tests involved combinations of the following system components:

We have found that certain configurations result in connection failures, or do not achieve adequate data rates. As a first step in troubleshooting, we recommend reviewing your system configuration against those tested. This information is outlined in Recommended USB 3.1 System Components.  Additionally, a list of known issues is presented at the end, with suggestions for troubleshooting.

Beginning with version 2.2 of the FlyCaptureSDK, the FlyCap Demo GUI tool includes some useful statistics for diagnosing connection and bandwidth issues. These statistics are located on the information pane of the FlyCap Main Window, under ‘Diagnostics.’ 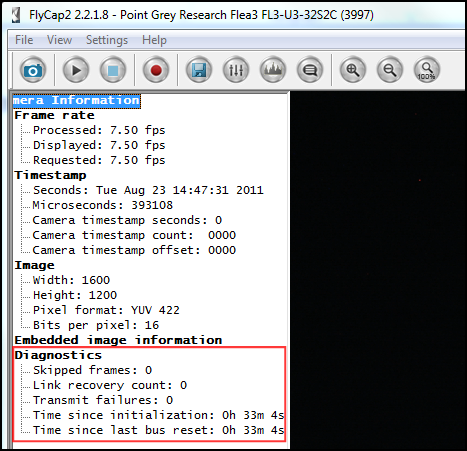 The following statistics are available:

Power can be provided to the camera directly through the USB 3.1 interface, or through the GPIO connector. The ideal input voltage is nominal 5 V DC. The camera automatically draws power from the higher source.

The following open-source tools may be useful for diagnosing connection and data flow issues:

USBlyzer —This tool (and others like it) is a USB protocol analyzer, and is useful when the driver of the xHCI card manufacturer is used in place of the FLIR USB 3.1 driver. It allows you to view the transactions between low-level Windows USB driver components as part of communicating with a host controller.

RW- Everything —Allows you to access and capture low-level data about hardware components on the system, including USB host controllers. Reading and interpreting the hardware registers may require advanced knowledge of the xHCI specification.