How tough are FLIR TICs?

This FLIR K2 helped firefighters navigate through a house that was burning up fast. The two residents had already escaped the flames, but an out-of-town visitor remained trapped inside. Where? The fire crew didn’t know.

So with the carpet melting in the intense heat, and the scene deteriorating around them, four firefighters rushed to the rescue. High temperatures and dangerous conditions forced two firefighters to turn back immediately. The others forged ahead through the thick, black smoke with a FLIR K2 providing the scene details needed to find the stairs and reach the second floor.

The firefighters checked the entire floor until they found the terrified woman in a bedroom. Moments after they entered and closed the door behind them, the door caught fire, blocking their exit. The only option was to rappel down from the bedroom window. Dropping the K2 to free their hands, the firefighters set up a bailout harness and carabiner system and prepared to make their escape.

It took another 30 minutes to get the fire under control, but there were no firefighter injuries and the residents and guest were safe. Then much later, during the overhaul, fire crews made a surprising discovery. Hidden in the rubble was the dropped K2. It was wet and charred and dirty — and to their complete amazement — fully functional. Once powered up, this tough TIC was ready to image scenes, measure temperatures, and help firefighters save the day once again.

Learn more about the FLIR K2 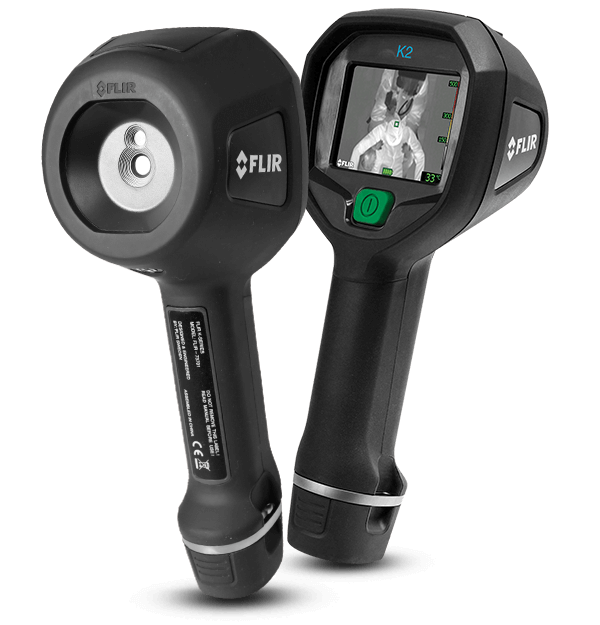 The technology to help you make life-saving decisions

FLIR's line-up of thermal imaging cameras for firefighting applications help you attain a clear view of hot spots from any angle—whether you're battling a fire or searching for victims in blinding smoke. When so many depend on you for their safety and well-being, rely on technology that acts as bold as you do.