Maintenance of hydrogen-cooled generators is critical for the safe and efficient operation of a power plant. Finding and repairing hydrogen leaks from the cooling system is one aspect that can require exhaustive searches on components, valves, fittings, or other locations. Traditional methods for hydrogen leak detection tend to be unreliable at finding the source of the leak and better at finding a general area where hydrogen is present. The advent of optical gas imaging cameras has improved the efficiency and performance of leak detection a great deal. With the addition of a dedicated thermal imaging camera for CO2 leak detection, utilities now have a way to efficiently find hydrogen leaks while using CO2 as a tracer gas.

The operation of an electric power generator produces large amounts of heat that must be removed to maintain efficiency. Depending on the rated capacity of the generator, it might be air cooled, hydrogen cooled, water cooled, or in the largest capacity generators, a combination of water for the stator windings and hydrogen for the rotor. Hydrogen cooling offers excellent efficiency thanks to low density, high specific heat and thermal conductivity. However, hydrogen is highly combustible when mixed with air and can be dangerous if the concentration level builds in an unwanted area. Turbine generators will leak some hydrogen during normal operation and rely on proper ventilation to keep the hydrogen levels from being a safety and explosion risk. Thus, hydrogen gas safety is critical for powerplant operators.

Hydrogen molecules are very light, and small, and therefore hard to contain. Between outages, the wear and tear on valves, seals, and equipment can allow large leaks to form and hydrogen levels to build in areas that could impact plant safety. The amount of hydrogen added each day is carefully monitored. An increase in make-up hydrogen would need to be investigated to find the source of the leak. Traditional methods for LDAR tend to be slow and may not find the leak quickly enough to avoid a shutdown. A shutdown period could last two to three weeks, with multiple days dedicated to leak detection alone. The cost associated with an unscheduled shutdown can run into the millions of Dollars for an electric utility. The industry would prefer to perform Leak Detection And Repair (LDAR) online to avoid unscheduled outages, but up until now they were limited in the ability to find the source of a leak.

Methods for detecting leaks range from using a soapy solution to create bubbles on each potential component to using microelectronic hydrogen sensors (sniffers) to detect hydrogen over a wide area. The soapy solution is sufficient for checking a single component but checking for a leak in an unknown location could take weeks. Also, this method only works for tiny leaks since too much hydrogen flow will push the solution aside without forming bubbles. The sniffer is a hand probe which produces an audio-signal when in proximity of a leak. Although this is a relatively affordable detection method, the sniffing test has some drawbacks. Generators are well ventilated. This can dilute the hydrogen unless one is in close proximity to the source. Ventilation airflow can also move the hydrogen quite far from the source leading to “hits” without adequately narrowing down which component needs repair. Sniffers do not allow operators to see the leak. There is always some guesswork involved and time lost in the search for the source of the leak.

As a more recent evolution in gas detection technology, infrared cameras have become much more popular with maintenance teams. Infrared or thermal imaging cameras as they are also called have been used successfully to detect insufficient insulation in buildings or find heat-based safety hazards in electrical installations. Optical Gas Imaging with thermal cameras came into use a few years ago, using SF6 as a tracer gas. However, some utilities have concerns with using SF6 as a tracer gas due to the cost, Global Warming Potential (GWP 23,000), and, in some cases, restrictions on expanded use of SF6. FLIR Systems partnered with the industry to develop a new generation of optical gas imagers using a tracer gas that eliminates those concerns. The new FLIR GF343 optical gas imaging camera uses CO2 as a tracer gas, which is readily available at generating stations. CO2 is inexpensive, has a much lower GWP, and much fewer restrictions vs. SF6 on use. This will allow broader application of OGI for finding leaks. Because only a small concentration of CO2 (generally 3-5%) needs to be added as a tracer gas to the hydrogen to make leaks visible to the OGI Camera, the purity level of the hydrogen in the turbine is maintained and normal generating operations are allowed to continue. Engineers have a new tool to use in the FLIR GF343 to find the source of leaks without a shutdown.

By adding a small concentration of CO2 (< 5%) as a tracer gas to the hydrogen supply, the generator will still operate at a safe and efficient level. This allows the operator and maintenance teams to monitor and check for hydrogen leaks during full operation. During tests in the US and Italy it was proven that the FLIR GF343 can visualize a small amount (~2.5%) of CO2 as a tracer gas in the system when there is a leak, therefore helping maintenance crews find and pinpoint leaks, tagging them for repair during shutdown, or for more immediate repair of any significant leaks. The benefits which the GF343 has to offer over other detection technologies, is that leak detection can now be performed under full operation, therefore saving time and money by reducing shutdown time. Shutdown time could be reduced by two or even three days and for each day of shutdown costing ~$80,0000- 100,000 (depending on type and size of generator), the payback and return of investment by using CO2 as a tracer gas and the FLIR GF343 CO2 camera is significant. But small leaks are not only very frequent; they can also turn into large leaks. With the FLIR GF343, maintenance teams can limit the atmospheric hydrogen concentration below the explosion limit in time.

How the FLIR GF343 works

The FLIR GF343 camera uses a Focal Plane Array (FPA) Indium Antimonide (InSb) detector which has a detector response of 3-5 μm and is further spectrally adapted to approximately 4.3 μm by use of cold filtering and cooling of the detector by a sterling engine to cryogenic temperatures (around 70°K or -203°C). The spectral tuning or cold filtering technique is critical to the optical gas imaging technique and, in the case of the FLIR GF343 this makes the camera specifically responsive and ultra-sensitive to CO2 gas infrared absorption.

Practically, the background energy, such as from the sky, ground or other sources in view of the camera, is absorbed by the gas. The camera shows this energy absorption by way of thermal contrast in the image. The camera not only shows the spectral absorption but also the motion of the gas, hence you visualize the gas as a ‘smoke’ plume.

The GF343 has an additional frame subtraction technique which enhances the motion of the gas. The High Sensitivity Mode (HSM) has been the cornerstone of detecting the smallest of leaks. HSM is in part an image subtraction video processing technique that effectively enhances the thermal sensitivity of the camera. A percentage of individual pixel signals from frames in the video stream are subtracted from subsequent frames, thus also enhancing the motion of the gas and improving the overall practical sensitivity of the camera and the ability to pinpoint the smallest of CO2 gas leaks, even without the use of a tri-pod. 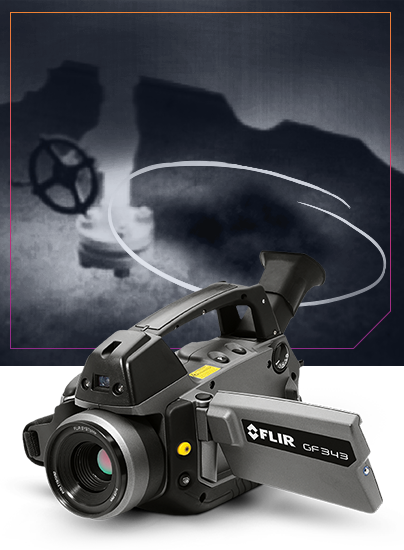 The GF343 is an optical gas imaging camera that lets you see CO2 leaks quickly, easily, and from a safe distance