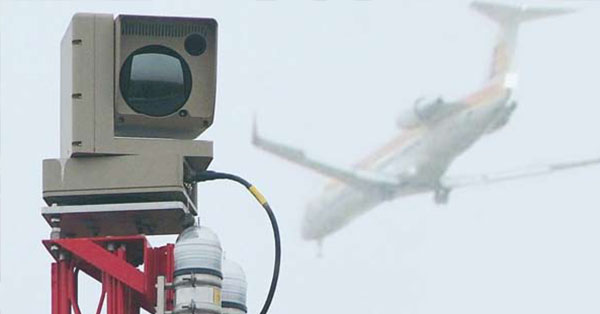 SAGAT Turin airport in Italy recently decided to increase its security even further by installing FLIR Systems thermal imagers. The airfield lies next to a military facility and the problem had been to detect intrusion along the 9 km long perimeter fence in darkness, haze and fog.

Even though the fence gives an alarm when someone is trying to get through, it has often been impossible to identify what caused the alarm and there was no system that could indicate a security threat outside of the fence.

SAGAT Turin Airport upgraded their security system and installed five Sentry II Thermal Imaging systems from FLIR Systems into their security network. The Sentry II systems, with integrated programmable pan-tilt, can easily be slaved to alarms from other sensors such as the alarms from the fence and provides a day and night situation awareness that covers most of the airport and also reaches a bit outside the fence line.

The Sentry II system is a thermal imaging system and provides reliable, continues day/night surveillance. The system consists of an uncooled thermal imager with an integrated and programmable pan-tilt and a daylight TV camera. The thermal imager has two optical fields of view. The wide field of view is 20° and provides a good overview over the area. The narrow field of view is 5° and makes it quick and easy to zoom in to an object to identify potential threats or to identify the cause of false alarms. Persons can be detected at distances of over two kilometres. It can be quite foggy in Turin from time to time and it is a good thing that the thermal imager can see through fog to a certain extent.

The Pan/Tilt quickly responds to any alarm or command and allows an azimuth of 0-120° per second so it does not have to take more than approximately a second before it is pointing in the right direction. It has programmable auto scan and the speed, dwell time, field of view on the thermal imager and daylight camera used can be set in a scanning pattern. 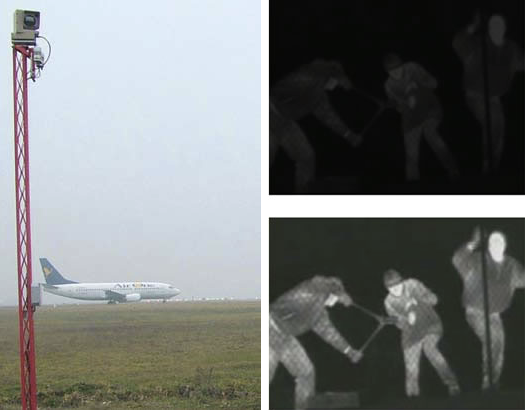 One of the Sentry II infrared cameras (left) at Turin airport; (right) With the Sentry II you can zoom in quick and easy to identify potential alarm situations. Even in total darkness (above) objects can be detected (below) at distances of over 2 km.