The Spinnaker Multicore GigE Optimizer is the combination of Receive Side Scaling (RSS) and CPU Affinity to optimize the performance of our GigE cameras. RSS assigns one CPU core in a multiprocessor system to process all the traffic on a network adapter port, while CPU Affinity pins all other processes away from that core. This setup allows the appointed CPU core to only process the network traffic for that one NIC adapter port, thereby optimizing streaming performance.

This setup is recommended for those who have enough CPU resources that they can dedicate some CPU cores without affecting other background processes. It is not recommended to use this setup on machines with a small number of CPU cores.

This feature is only available on Windows platforms.

For more information on RSS see Introduction to Receive Side Scaling from the Microsoft site.

We recommend you update your NIC driver to the latest version and verify it supports RSS.

CPU affinity is a service (CpuAffinity_v140.exe) that comes with the Spinnaker installation.  When running, the service periodically updates a bit mask to all active processes.  The bit mask describes which of the available processors should be pinned/unpinned for a process.

For more information on CPU affinity see Processor Affinity or CPU Pinning from the Intel site.

By default, CPU affinity is not enabled.

To enable RSS and CPU affinity with AdapterConfigGUI

3. From the Select Adapter tab, notice the Receive Side Scaling Column.

4. Select the adapter(s) you want to configure and click Next.

5. For each adapter, you can dedicate a processor for RSS with the checkbox. If the checkbox is enabled, you can reserve a processor dedicated for the adapter. Note that if hyperthreading is supported, you should select an even-numbered (physical) CPU.

6. From the Advanced System Configuration tab, enable CPU affinity optimization with the checkbox and click Next.

To disable RSS and CPU affinity with AdapterConfigGUI

3. Select the adapter(s) you want to configure and click Smart Config.

There are three methods to verify CPU affinity: 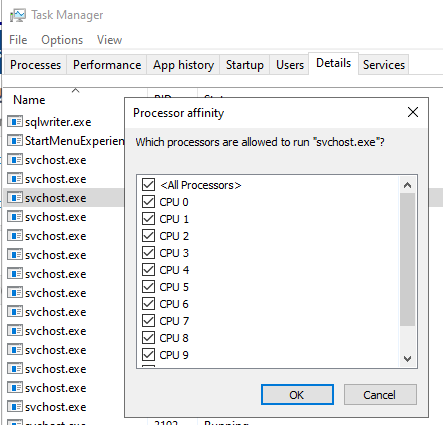