Most of our imaging products implement one or more Format_7 custom image modes. These modes offer two main techniques for customizing image size: region of interest (ROI) and pixel binning. In most cases, Format_7 modes can implement a combination of both ROI and binning. For model-specific implementation, consult your camera's technical reference manual, or contact support.

This technique, also known as "sub-windowing," allows the user to select a specific portion of an image for the camera to transmit (see the figure below). ROI usually enables the camera to send images at faster frame rates; the camera simply skips CCD rows until it reaches the area of interest. Note that the camera cannot skip columns. Therefore, any increase in frame rate is due to a reduction in rows and not in columns. ROI has no effect on color processing, since the Bayer tiling in the region of interest is left intact.

Pixel binning involves taking groups of pixels and combining them into a single pixel in some way. We implement the following types of  binning:

The figure below shows pixel binning implemented in groups of two (2x), either horizontally or vertically: 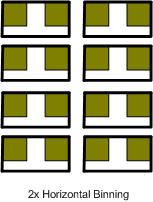 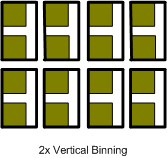 Most of our binning modes implement some combination of 2x horizontal and 2x vertical (2x2) binning and/or subsampling, resulting in a resolution that is both half the original number of pixels in height, and half the number in width. This decreased resolution usually results in a frame rate increase. However, because of the averaging of values that is performed after combining pixels, binning does not usually result in a significant increase in image intensity.

Depending on model, some color sensors support color binning, which means the Bayer tile pixel pattern is maintained during the binning process, and images can still be color-processed. On other models, color data is lost during binning, and the resulting images are black and white only.

The figure below shows an example of 2x2 binning on a color sensor that does not support color binning:

For an example of how to implement Format_7 ROI and pixel binning in your application, refer to the CustomImageEx sample program, included with the FlyCapture SDK.