FLIR Systems, Inc. is proud to partner with Providence Photonics on the announcement of new Quantitative Optical Gas Imaging (qOGI) technology, which is designed to work solely with FLIR GF-Series cameras.

By using Providence Photonics’ QL320™ in conjunction with a FLIR GFx320 or FLIR GF320 camera, surveyors can measure mass leak rates (lb/h or g/h) or volumetric leak rates (cc/min or L/min) for most hydrocarbons. The QL320 can be used at a variety of distances, so operators can monitor hard to reach areas and storage tanks as well as survey massive leaks from a safe location.

Additionally, the QL320 offers built-in Delta Temperature screening tools that enable the user to assess thermal contrast during leak inspections. This technique ensures inspections are performed with optimal temperature difference between the gas leak and the background, which is directly in line with requirements laid out in the EPA's latest methane regulation (OOOOa).

The QL320 is portable, easy to use, and provides results in the field within seconds. These videos are just some examples of how Providence Photonics quantifies leaks – based on pounds of gas released per hour. The QL320 can also provide an archive of measurements for reporting and analysis purposes. 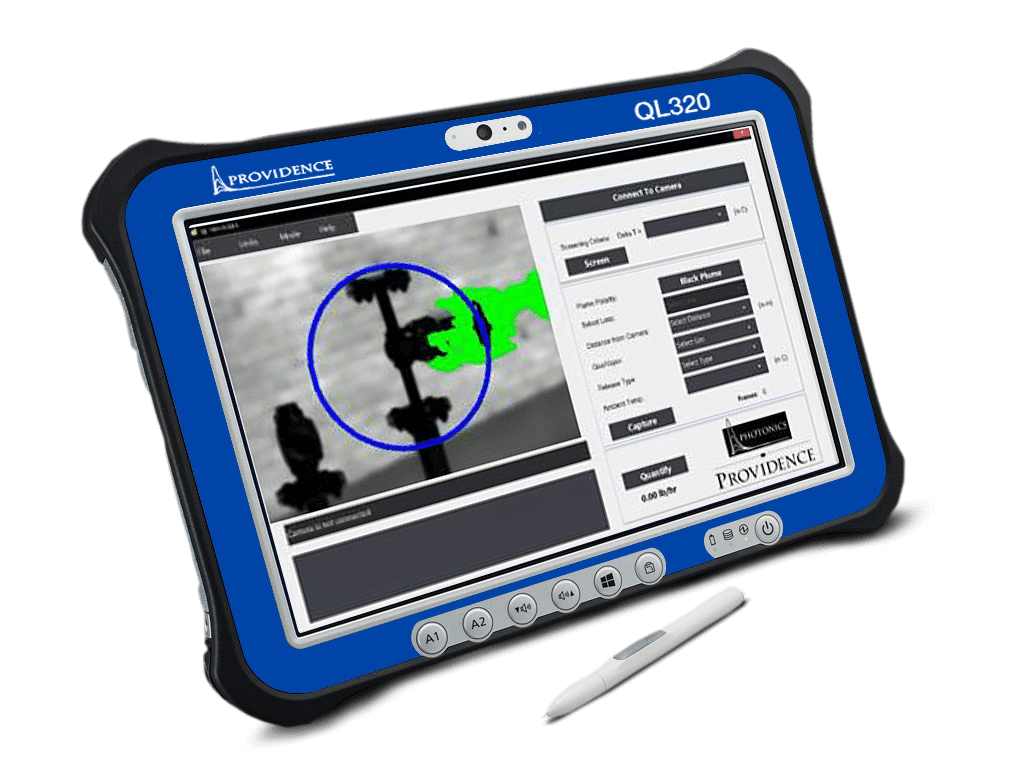 Quantitative OGI represents a critical step forward in the world of optical gas imaging because it eliminates the need for secondary sampling devices to quantify gas emissions. How well the system is able to quantify a specific gas is a function of the FLIR camera, which may be more sensitive to one compound than another. This can be measured relative to a reference compound, with the resulting value called Response Factor (RF).

For example, say an RF value for benzene is 0.75 in reference to propane. This means the FLIR GF320 camera detects benzene nearly as well as it detects propane – in fact, the image of benzene is 75% as strong as the image of propane. An RF value below one would signify a potentially weaker image, while an RF value over one signifies a stronger image (e.g. an RF of 1.75 means the image is 75% stronger).

Highlight the Problem with IntelliRed™

Providence Photonics and FLIR also provide an autonomous remote gas detection system that makes catching leaks even easier. IntelliRed™ pairs FLIR’s G300a optical gas imaging camera with technology that highlights gas plumes in real-time, with multi-stage leak confirmations and protocols that filter out people, vehicles, and other objects that could interfere with the image.

This system is ideal for oil platforms, tank farms, loading terminals, and anywhere hydrocarbon gases could leak. It can detect gas from up to 500 feet away and can alarm for proactive leak detection.