The world of thermography is often centered around three areas: science, security, and inspections. We often gloss over, though, the striking images that can be produced when we reveal the invisible infrared (thermal) radiation surrounding us. “Picturing the Invisible” is then both an apt description of thermography and the title of Dr. Makoto Takahashi’s art exhibit, dedicated to the 2011 Tōhoku earthquake and tsunami that struck eastern Japan. With the help of his students at the Technical University of Munich, the exhibit brings together several talented photographers, essayists, and a FLIR T-series camera to immerse outsiders in the world of those effected by disaster.

Known as the “Great East Japan Earthquake”, or more simply “3.11”, the Tōhoku earthquake on March 11, 2011, was the largest recorded earthquake in Japan’s history and the fourth largest in the world. It triggered tsunamis that, in turn, set off the Fukushima Daiichi nuclear disaster—the meltdown of three nuclear reactors and discharge of radioactive water in Fukushima. The earthquake, tsunamis, and nuclear meltdown caused nearly twenty thousand deaths and left six thousand injured and hundreds of thousands displaced from their homes.

While the events of 3.11 are long since over, the aftermath still lingers today. Dr. Takahashi’s “Picturing the Invisible” highlights the legacies of trauma, radiation, and the resilience of the communities rebuilding in the wake disaster. Along with artwork provided by several photographers, each work is paired with commentary written by a field expert, policymaker, author, or activist. 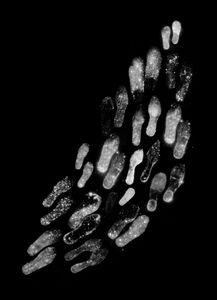 “Evacuation: Insoles” by Masamichi Kagaya and Satoshi Mori, one the featured artworks depicting a trail of glowing footprints left behind the irradiated shoes of Fukushima Citizens.

The exhibit premiered at the Royal Geographical Society in London in October of 2021 and, more recently, opened at TU Munich in June. The latest show included an evening panel with a crowd of 150 attendees, including representatives of the International Commission on Radiological Protection and the United Nations Scientific Committee. The panel featured exhibit artist Yoi Kawakubo and various TU Munich faculty members discussing what it means to remember Fukushima in Germany today.

The exhibit also featured an interactive installation using a FLIR T-Series camera to project thermal images of guests on to wall. The camera was setup on the exhibit floor, and all were welcome to pose in front of it to see how they appear in thermal. On the surface, the camera creates a fun photo-op for guests; but it also gives the audience a new perspective on the featured art works.

Takahashi hoped that by seeing invisible thermal radiation around themselves, the audience would consider other invisible forces of nature and become more empathetic to the invisible nuclear radiation Fukushima citizens face. The exhibit includes thermal images of irradiated cows and people standing within the exclusion zone at the Fukushima site. While thermal cameras cannot display nuclear radiation contamination, nor is infrared harmful, the images provide a unique look at the people and places affected by the disaster. 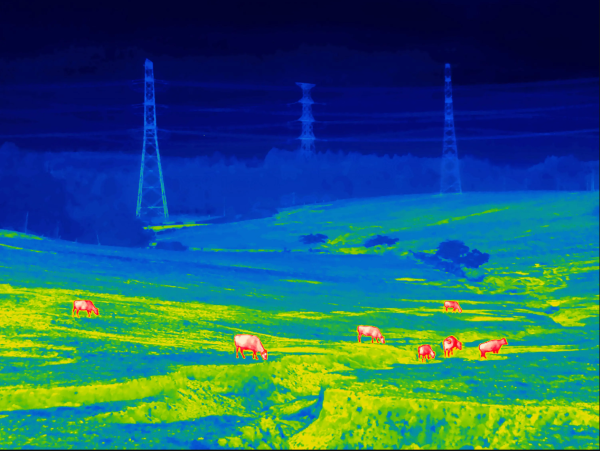 “At that point a year and a half of COVID, we should be able to be a bit more sensitive and empathetic to what it's like to live with this kind of invisible threat all around you.” Takahashi told us. “It'd be interesting to have it in the room and for people to be interacting with it and to have the comparison with these works taken in Fukushima to draw out this the kind of continuity that has been suggested by using the same visual language in two different contexts. I think also it does provide an insight into the production of the artworks. It makes tangible what the process was. I think that was something we were excited about and something we were trying to do with some of the other artists as well” 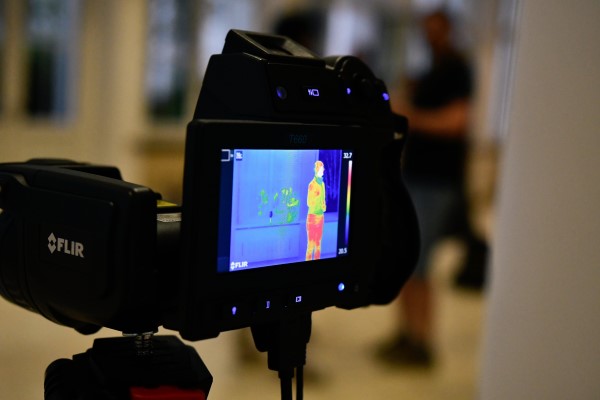 While the event was spearheaded by Dr. Takahashi, he delegated many of the responsibilities out to his students. “Like so many projects, this exhibition has been molded by COVID-19” Takahashi says on the exhibit’s website. “I saw in this project as an opportunity to offer them something extra. To this end, I chose to integrate the curation of this exhibition into my teaching at the Department for Science and Technology Studies.”

One of those students, Nicholas McCay, initially pitched the idea to incorporate a thermal camera. “The other cohorts were doing other kind of projects. It was much more academic based—like we'll have some discussions around a topic and then just like write a paper,” McCay explains. He liked the idea of using a thermal camera instead because it was “much more engaging, much more like actually collaborating.”

While a professional-grade thermal camera may seem intimidating to those who aren’t familiar with the technology, the FLIR T-series camera gave the exhibit no troubles on setup day. “Honestly it was right out of the box, you can't really complain about any of that. All the user functionality was quite easy, quite self-explanatory, and I’m sure that even someone who didn’t have the background or someone else’s help could figure it out”.

Both the thoughtfulness of the exhibit and the inclusion of a thermal camera seem to have paid off for Takahashi and his students. Their exhibition received the Ziman Award for public interaction with science and technology from the European Association for the Study of Science and Technology (EASST). The awards committee noted that the exhibit was remarkable for its depth of engagement, its broad range of collaboration between essayists and artists, the involvement of students, and its impact on society.