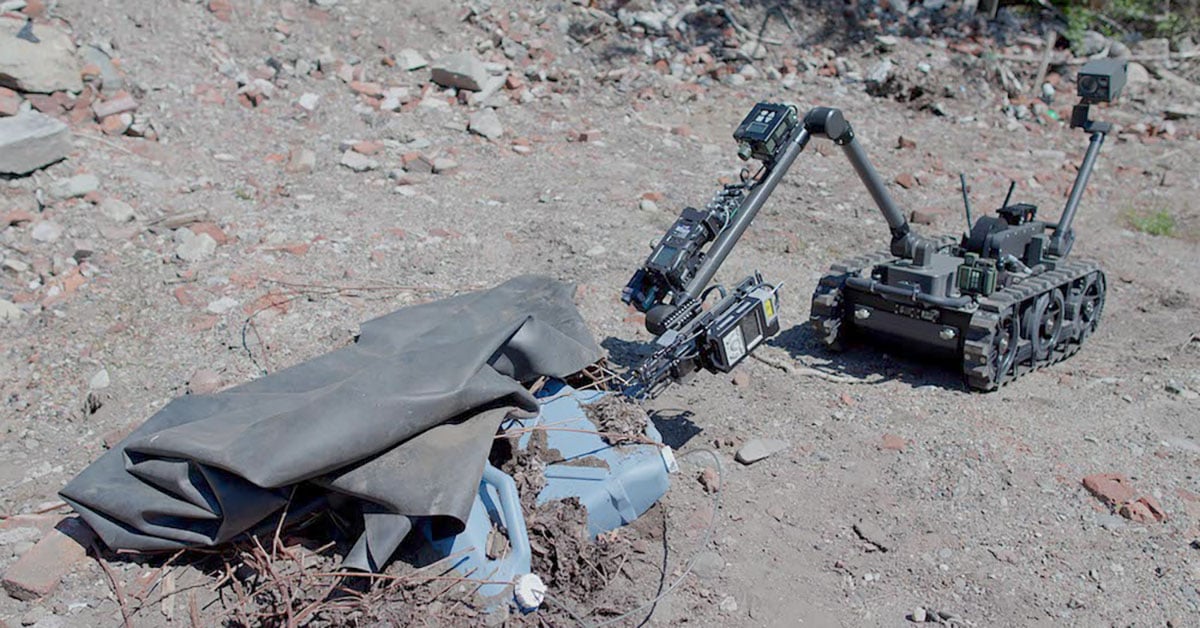 This content first appeared in the Jan. 2021 issue of CBNW Magazine in a story entitled, "From a Distance".

Globally, the use of Chemical, Biological, Radiological and Nuclear (CBRN) weapons is becoming more frequent and increasingly more lethal. Reported Syrian government use of nerve agent (G) on civilian populations in 2017 is one example. Alleged use of advanced nerve agent by North Korea (Vx) in a politically motivated assassination that same year shows a further willingness to employ lethal capability. Lastly, assassination attempts in 2018 and 2020 attributed to Russia using Novichok agents suggest a repeated readiness to use the most deadly of nerve agents to achieve national objectives with disregard for international treaties.

Future military operations are envisioned to be more diverse, contested across all domains, and to require rapid decision making to enable decisive maneuver. Conducting-multi-domain operations in a CBRN environment further exacerbates the challenge for military forces, both at home and on the battlefield. It also seems clear the diversity of threat is continually expanding and evolving to more lethal materials, with increasingly sophisticated delivery methods. To be successful, defense forces must be able to sense hazards more rapidly, at greater speed, increased standoff distance, and to share intelligence faster throughout the formation.

In the early 2000’s, the U.S. Joint Program Executive Office for Chemical, Biological, Radiological and Nuclear Defense (JPEO CBRND) developed and fielded the Nuclear, Biological and Chemical Reconnaissance Vehicle (NBCRV) to the U.S. Army to provide route and area NBC reconnaissance for Armor and Infantry Forces. The initial design incorporated state-of-the-art technologies into a Stryker platform to accomplish this mission and relied heavily on point detection CBRN sensors augmented with limited standoff detection ability. The original NBCRV concept was an evolutionary leap ahead from other technologies of the day, but recent advances in sensors and unmanned systems have created an opportunity to improve on the initial system and to set conditions for future CBRN reconnaissance.

FLIR Systems is lead integrator in modernizing the Army’s NBCRV system with improved and autonomous CBRN sensors. The FLIR NBCRV Sensor Suite Upgrade (NBCRV SSU) maximizes the use of sophisticated CBRN sensors and pairs them with unmanned aerial and ground vehicles to increase the speed and standoff distance for both sensing and reconnaissance.

With the NBCRV SSU, commanders in a future multi-domain operation will be able to recon potential hazard areas at speeds required to maintain operational tempo and rapidly adjust avenues of advance to avoid confirmed contamination. Executing CBRN reconnaissance at greater speeds improves unit survivability and allows engaged units to react quicker than our enemies to ensure mission success.

The FLIR NBCRV SSU modernizes the suite of CBRNE (+explosives) sensors with a focus on integrating standoff sensors. The design incorporates sensors into modular, multi-mission packages that will offer military users flexibility to adapt the sensor suite to a wide range of military vehicle classes. The systems can easily be adapted to any manned, unmanned ground, or aerial military platform. The suite also can be employed in a manned-unmanned teaming arrangement to maximize probability of detection without placing crew members in the hazard. Lastly, the sensor information, drone controls, and communications capability are all integrated to allow for task automation and decision support.

FLIR Systems has heavily invested in a toolbox of technologies and products that form the building blocks of the NBCRV Sensor Suite upgrade. FLIR has long been a developer of premium class EO/IR cameras and has expanded its offerings to include a broad spectrum of CBRNE threat detecting sensors. More recently, FLIR has acquired and developed a wide array of unmanned ground and airborne systems to augment its platform solutions portfolio, including the widely deployed Centaur® and Kobra™ ground robots, Black Hornet® nano-drone, and R80D SkyRaider™ Group 1 UAS.

Along with all this technology comes a lot of subject matter expertise that becomes crucial in not only working with our military partners to build new capabilities, but also in helping them decide how those capabilities can and should be employed. This partnership is critical when radically new concepts of operations are demanded by the impacts of disruptive technology. With these tools, and working with government customers and commercial partners, FLIR is creating a new, highly integrated CBRNE capability that will achieve increased speed, better detection at standoff distances, and enhanced decision support to improve a commander’s situational understanding.

The current NBCRV system is composed mostly of point detection sensors and therefore must be ‘in the middle’ of a threat for detection to occur. Integration and maximum use of standoff sensing could reduce the potential risk of operators being exposed to CBRN hazards. This has long been a capability desire but has been difficult to achieve due to the insufficient performance of current technologies employed for biological and chemical standoff detection systems.

With the maturation of commercially available drones, it is now possible to utilize the information or indications from existing standoff sensors not as a detection event but rather as a trigger to initiate higher fidelity measurement. The biological and chemical warfare agent detecting standoff systems can cue a CBRN sensor-integrated drone, such as the FLIR SkyRaider, to fly to a waypoint in space for more specific interrogation of a suspect aerosol or vapor plume. In this way we are not requiring performance from the standoff sensor that it cannot achieve, and we are not requiring soldiers to come in contact with the threat to utilize the point sensor. Unmanned systems allow us to extend our higher fidelity point sensor capability kilometers away. Likewise, persistent chemical threat agents might be employed as terrain denial weapons, making it necessary to survey areas and routes for ground contamination. The currently-fielded manned NBCRV Stryker would be required to drive over and onto the threat to detect the presence of ground contamination. However, CW sensors mounted on unmanned ground platforms like the Textron RIPSAW M5 Robotic Combat Vehicle could accomplish this mission from remote distances.

Beyond developing a modular system suitable for manned and unmanned platforms, perhaps the greatest capability improvement will come from combining the data of multiple point, standoff, and non-CBRN sensors. This will enable data aggregation that leads to the creation of meaningful, relevant information for decision-makers. In addition to task automation – driving new system responses from sensing cues – we will be able to quickly present new and enhanced situational understanding to warfighters so they can focus on active response. This data integration opens up a major opportunity to design and implement numerous decision support tools already in development.

FLIR continues to advance the concepts of the Sensor Suite upgrade beyond the current NBCRV effort. We are working with the Army on other platform integrations that will increase operational utility to include manned-unmanned teaming. Similarly, the SSU can be adapted for use in a stationary configuration to meet other warfighting missions. We envision a future multi-domain operation with fixed site, dismounted, and mobile integrated sensors all working together to provide holistic early warning across the entire theater of operations. FLIR Systems stands ready to meet the U.S. Army’s needs and to adapt these technologies for all future platforms, as well as the CBRN operational requirements of sister services and allied partners.

Dr. David Cullin is Vice President of FLIR CBRNE Detection Systems, and Jay Reckard is a Director of Business Development for FLIR Unmanned Systems and Integrated Solutions. Dr. Cullin has worked for FLIR Systems since 2006 after 15 years at the US Dept. of Defense. Colonel Reckard (USA, retired) joined FLIR in 2020 after a 29-year career in the U.S. Army, where he commanded CBRN units from Company through the Brigade and Joint Task Force level.