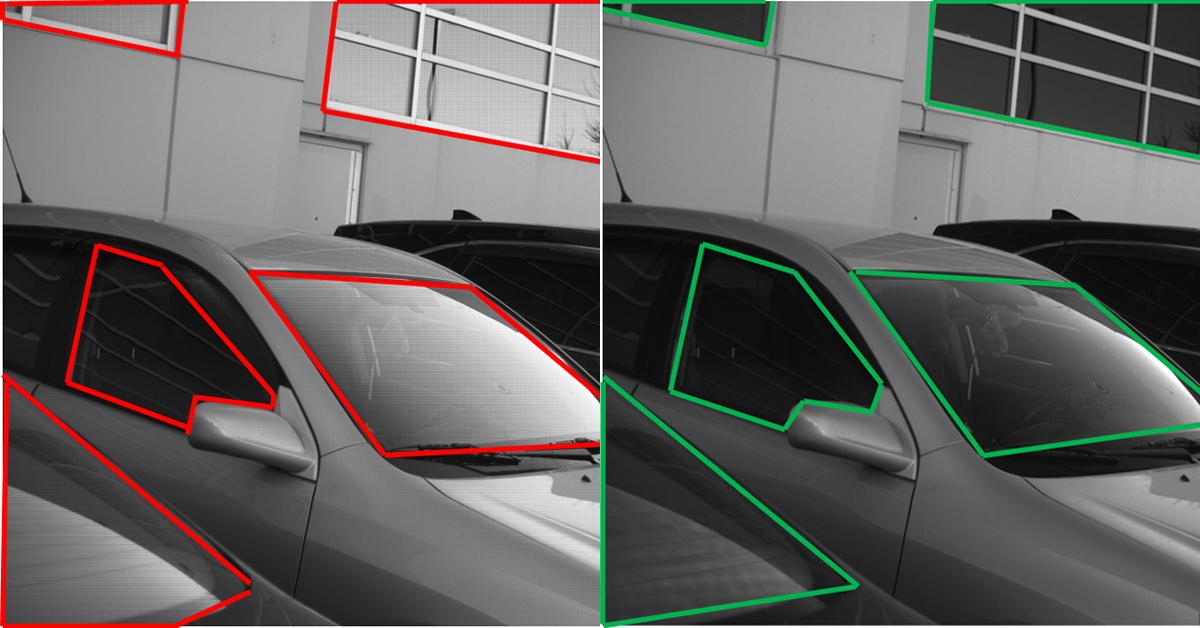 Why use on-sensor polarization?

Systems that rely on multiple cameras and filters behind a beam-splitting prism, or a single camera with a rotating filter or filter wheel, are large, complicated, and slow. By simultaneously sensing the angle and intensity of all polarized light across the sensor, Blackfly S cameras with polarized sensors deliver increased speed, reduced size, complexity and power consumption compared to existing solutions.

When on-camera polarization is useful:

Using a polarized filter setup is challenging for ITS applications like seatbelt or mobile device violations imaging through reflective windshields, as outdoor lighting conditions change throughout the day. Some systems overcome this with multi-camera / filter setups, significantly compromising on system reliability while increasing hardware and maintenance costs. On-camera polarization can simultaneously capture four sets of images per frame; ensuring at least one of these images is effective at eliminating unwanted reflection. Application developers are afforded the flexibility of choosing one or multiple polarized images during post processing – saving time and money on development, integration and maintenance.

Reflections on a windshield under outdoor lighting conditions; with and without polarization.

Polarimetry is ideal for detecting objects that would otherwise be difficult to identify using traditional visible or thermal imagery. Camouflaged vehicles or microscopic cell structures continue to reflect polarized light oriented parallel to the surface; these reflections stand out clearly in AoLP mode (Angle of Linear Polarization), as illustrated below.

A well camouflaged vehicle before and after utilizing on-sensor polarization

Sony’s IMX253MZR and IMX250MZR sensors are based on their popular twelve and five-megapixel IMX253 and IMX250 Pregius global shutter CMOS sensors. Each individual pixel has its own polarizing filter - these filters are oriented to 0°, 45°, 90° and 135° and arranged in repeating two-pixel blocks. These sensors have features that minimize the impact of reduced quantum efficiency (QE) resulting from adding polarizing filters to pixels. For instance, the polarizing filters of the IMX250MXR have a 4:1 extinction ratio, which is high enough to deliver accurate polarimetric data without blocking cross-polarized light. This ensures that even when filter alignment passes a minimal amount of light, enough light will reach the light-sensitive photodiode to capture useful images. This enables capture of low-noise images even in challenging conditions requiring gain to compensate for reduced QE.

Interpretation and characterization of polarization parameters of light require measurements from all four angles of polarization. To achieve this for each pixel on the sensor, an interpolation process is required, where data from adjacent pixels are combined. This is analogous to how data from adjacent red, green, and blue pixels is combined on color sensors to produce RGB values for each pixel. This process is natively supported by Spinnaker SDK.

RGB pixels rearranged into 2x2 “super-pixels”. Each super-pixel has one polarizing filter per orientation and contains all the information necessary to compute the Stokes parameters at that location. 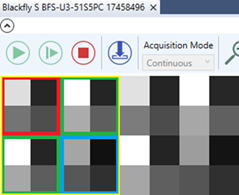 Light is a transverse electromagnetic wave. As it propagates, it oscillates perpendicular to the direction of propagation. Most light sources emit unpolarized light, with all the waves oscillating at random angles. When light is aligned so that most waves oscillate at a common angle, it is said to be polarized. Circular polarization is also possible, though it is beyond the scope of this guide.

Industrial applications frequently rely on a pair of polarizing filters; one that creates a polarized light source and another that passes only polarized light aligned to a specific orientation. These systems typically require precisely aligned filters and highly controlled lighting. They are only sensitive to one angle of polarized light.

As a polarizing filter is rotated, the intensity of the light it passes will increase as it comes into alignment and decrease as it is moves beyond the angle of alignment.

As a polarizing filter aligned to the angle of the blue wave is rotated, it begins to block the blue wave and pass the orange one.

When plotted, the change in intensity relative to polarizer orientation is like a sine function. The ratio between the highest and lowest intensities is called the extinction ratio.

Due to the transverse nature of light, angles of polarization cannot exceed 180°. As the slits in a polarizing filter are all parallel, rotating a filter by 180° will return it to its original orientation. This explains why the intensity peaks and falls off twice as the filter is rotated by 360°.

How does light become polarized?

Light can become polarized when emitting directly from a coherent source, passing though a polarizing filter, or reflecting off a non-metallic surface. The angle of polarized light reflected off water or a polished surface is parallel to surface.

The angle of polarized light can change as it passes though certain optically active materials, such as biological molecules and pharmaceuticals.

S0 is the intensity of light beam. On the IMX250MZR, this is calculated by adding the intensities of the vertically and horizontally polarized pixels. 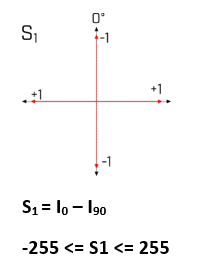 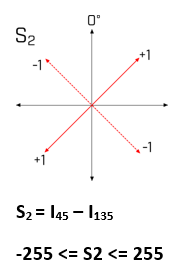 S3 is the circular polarization component. Though this parameter is not measured by the IMX250MZR, it can often be accurately estimated. In outdoor and passively illuminated environments, S3 is assumed to be 0 since sunlight is unpolarized and reflection or scattering of sunlight only imparts linear polarization.

In environments with controlled active illumination, it is possible to eliminate any sources of unpolarized light, making it possible to characterize the circular component. 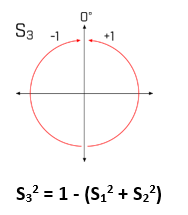 The S1, S2, and S3 Stokes parameters are frequently represented as a set of spherical coordinates mapped to a Poincaré sphere. This notation is a convenient way of understanding the relative contribution of each of the polarized components of a light beam to its overall polarization state. 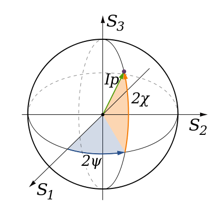 Poincaré sphere. Outdoors, the S3 component can reliably be assumed to be 0. The intensity, Ip is equal to 1.

The Angle of Linear Polarization (AoLP) is the average polarization angle of the light at a given pixel. If the DoLP is low, only a small amount of light will be polarized. In this case, the resulting AoLP values will show clear spatial and temporal noise. This is analogous to a low intensity signal being amplified with high gain. As the DoLP increases, AoLP values will become less noisy.

Have a Question? Ask Our Experts: