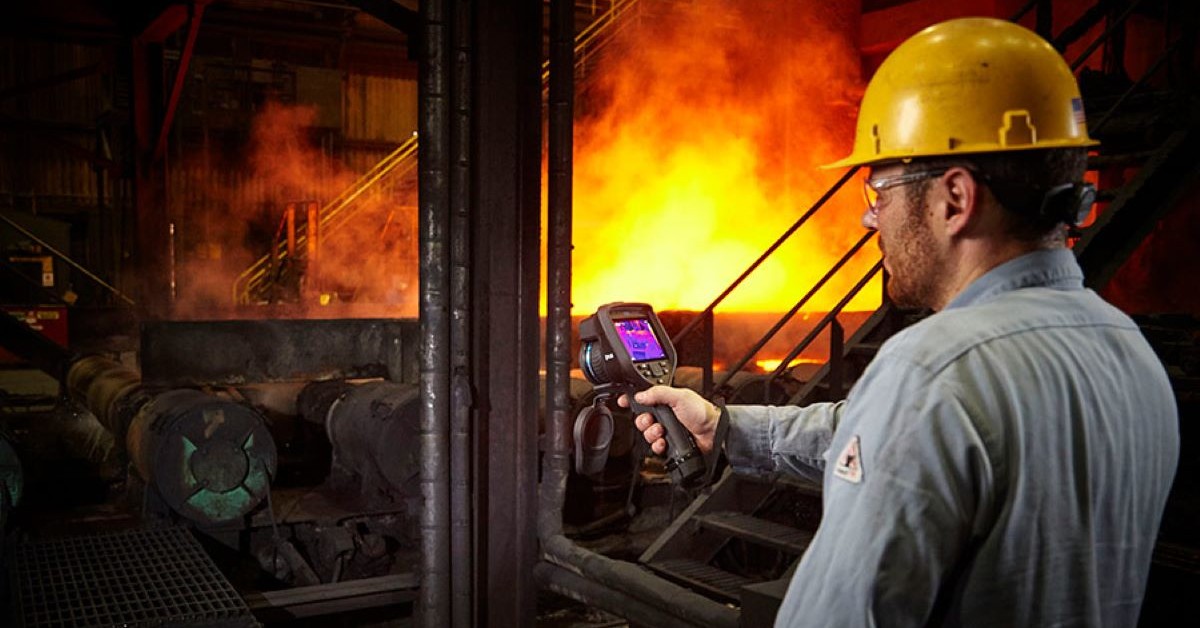 From building materials to cars and tools, it would be hard to find an area of our lives that isn’t reliant on steel production. Steel producers, in turn, rely on low production costs and continuous uptime to manufacture that much-needed steel efficiently and stay competitive.

There are two key components to steel production that can pose the risk of failure and therefore require regular inspection: electricity and oxygen. Electricity to run the plant and compressed oxygen to precisely control furnaces and smelters.

Thankfully, Teledyne FLIR has a wide range of products that makes inspecting components easy and allow you to locate failures quickly. We’ve outlined a few key risks in steel production and which FLIR solutions can solve them below.

Insulation inside switchgears, cables, and other electrical system components are exposed to extremely high temperatures for long periods during steel production and must be inspected regularly to prevent failure. This high-stress environment can break down switchgear insulation, epoxy resin supports, and bushings, causing partial discharges of electricity. If it’s not addressed, partial discharge can affect the power supply to critical equipment, cause the insulation to deteriorate, and eventually lead to power failure.

Among the critical equipment affected by partial discharge is the oxygen compression system. Steel and other metal manufacturers use compressed oxygen to control combustion in converters, blast furnaces and smelting. Having the correct amount of oxygen flowing at all times is critical to obtaining high quality end product. Steel producers also need to inspect for leaks in the compressed oxygen system as they can lead to higher energy costs and a lower-quality end product.

Finally, production facilities are at risk of carbon monoxide (CO) gas leaks as blast furnaces, coke ovens, and Linz-Donawitz gases use CO as the primary component. Not only is CO life-threatening to plant workers, it’s also harmful to the environment. Finding CO leaks can be challenging because the gas is invisible to the naked eye and the effects of leaks are so gradual that they’re hard to notice right away. Gases used in the production process are also reused later down the line for power generation and reheating furnaces, meaning waste can cause financial costs in multiple parts of production.

Thermal imaging cameras offer multiple benefits to steel production lines. With their ability to provide hundreds of thousands of temperature measurements in each image, thermal cameras are a fast, efficient choice for inspecting components susceptible to heat degradation and troubleshooting electric issues. Heat is the first sign of failure in mechanical and electrical systems, so regular inspections with a thermal imaging camera such as the FLIR E96 allows manufacturers to avoid shutdowns caused by failed wiring, overheating machines, or damaged fuses. Often these inspections are performed with handheld cameras—but when incorporated into a system with machine vision, a fixed-mount thermal camera such as the FLIR A70 Image Streaming camera allows for continuous inspection without human intervention and keep workers safe from high temperature components.

Optical gas imaging (OGI) cameras are also becoming more common in factories and are perfect for catching dangerous and costly gas leaks. OGI is used in the utility, oil, and gas industries to catch a wide array of potential issues caused by gas leaks. The FLIR G346 is specially filtered to visualize CO and other harmful gases, and can be used to quickly scan potential leak points across wide areas from safe distances. Technicians can detect even the lowest level of gas emission with the GF346’s high sensitivity mode if there is sufficient difference between the ambient temperature of the leaking component and the background scene.

While still a relatively new technology, acoustic imaging is finding success in production lines and allows easy detection of both compressed air leaks and partial discharge. Acoustic imaging allows an operator to visualize the sounds generated by oxygen as it leaks from a compressed air system and partial discharge along deteriorating insulation in electrical systems. The FLIR Si124 comes with 124 built in microphones that then source frequencies on top of a digital image, making any leaks easy and intuitive to find.

While factories are usually heavy with sounds of machinery, the Si124 can filter out background noise and isolate leaks. The camera has a frequency range of two to 31 kHz to detect the smallest leaks at long distance or it can be made to detect even smaller leaks at closer ranges using frequencies up to 65 kHz. The ability to filter noise allows production facilities to find leaks from invisible gases even in loud environments with air flow changes around a problem area.

The Si124 can also detect partial discharges from 130 meters away then analyze and classify three discharge types: surface discharge, floating discharge, and corona. When connected to Wi-Fi, the Si124 supports in-field reporting and can send images directly to the FLIR Acoustic Camera Viewer cloud service for sharing or downloading. Users can then create reports and easily share them with colleagues using FLIR Thermal Studio Pro.

There are many other Test & Measurement tools, software suites, and development kits that work seamlessly with FLIR thermal, acoustic, and optical gas imaging cameras to provide a complete look at the health of electrical, mechanical, and compressed oxygen systems. Addressing predictive maintenance with the right tools can help steel manufacturers maintain uptime, work efficiently, and keep costs low enough to stay competitive.