The 2018 Edition of NFPA l0E Standard for Electrical Safety in the Workplace was released in late 2017 with little fanfare. However, there are several significant changes in this edition that have potentially wide-ranging implications for maintenance personnel collecting condition-based data on their electrical and electromechanical assets. Included in this would be the performance of infrared inspections, ultrasound (partial discharge) inspections, motor current analysis, oil sampling (for oil analysis) on transformers and basic visual inspections.

The NFPA 70 National Electrical Code (NEC) and the NFPA 70E are meant to work hand in hand. The NEC defines how to properly install listed electrical equipment including items such as cable ampacity, fuse and breaker ratings, conduit fill guidelines, and safe equipment clearances. When electrical equipment is designed, installed, and maintained properly and is operated under "normal" conditions with all hinged doors closed, covers on and guards in place, workers are not exposed to any hazard(s). The NFPA 70E deals with how to reduce risk through safe work practices on equipment under "abnormal" conditions, either intentionally or unintentionally, and when the likelihood of shock exposure, arcing fault and arc flash are heightened. 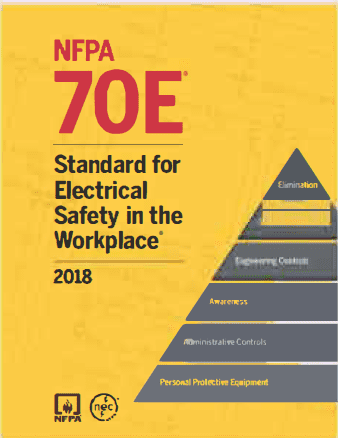 The first major NFPA 70E update released in late 2017 occurs in the Hierarchy of Risk Control Methods. These were previously recommended, non-mandatory requirements that have now been made mandatory. These requirements apply to any energized electrical work task that mitigates exposure or reduces risk [reference Article 110.1 (H)(3)]. The Hierarchy must be applied in sequence to reduce the inherent or initial risk to a residual risk level that is as low as reasonably practicable (ALARP). The Hierarchy of Risk Control Methods consists of six controls - Elimination, Substitution, Engineering Controls, Awareness, Administrative Controls, and Personal Protective Equipment (PPE). Each level of control must be considered fully and eliminated as an option to reduce risk before moving to the next lower control within the hierarchy. Controls lower in the Hierarchy are less effective at mitigating risk.

Now we will go into detail regarding all six of the controls within the Hierarchy, starting with the most effective and ending with the least effective.

2. Substitution - Replace something that produces a hazard with something that does not produce a hazard. To be an effective control, the substitution of a process or product must not produce another (new) hazard. If a given CBM work task must be performed with the electrical equipment energized, determine if there is another method to see or listen inside the equipment or collect a sample without exposing energized conductors or circuit parts. Can opening hinged doors and removing electrical equipment covers be avoided? The use of Electrical Maintenance Safety Devices (EMSD) such as properly sized and located infrared windows, ultrasound ports, or sensors may allow the qualified person to inspect the electrical equipment and collect data without any exposure to energized conductors or circuit parts. External oil sampling ports can be installed on transformers that allow the qualified person to gather a sample without opening the energized terminal chamber. Motor Test Access Panels (MTAP) can be installed to allow safe closed panel testing of motors. "Substitution" may also be thought of as Design for Maintainability. It may be incorporated into new or retrofitted into existing older equipment. The cost associated with implementing EMSD is not necessarily enough defense to bypass "Substitution" to the next control in the hierarchy.

Awareness ensures there is a plan and it has considered all the potential risks of doing energized open-panel CBM work. Until the plan is complete and documented, you cannot proceed to the next control in the Hierarchy. Awareness controls also include ensuring signage is installed on electrical equipment - identification and arc flash/shock equipment labels.

5. Administrative Controls - Includes using electrical safe work procedures and employee training. Specific training for qualified persons would include Electrical Safety Training, Lockout Tagout Training, Emergency Response Training, First Aid/CPR (based on jurisdictional requirements), and PPE training. Training must be documented and retraining/certification must be performed at proper intervals. Even unqualified persons who will not be working on electrical equipment need to be trained on basic electrical safety practices. With the Awareness and the Administrative Controls in place, only then can you move to the final control in the Hierarchy.

6. PPE - Personal Protective Equipment includes but is not limited to rubber insulating gloves with leather protectors, using insulated hand tools, arc-rated clothing, arc-rated face-shields, arc flash suits etc. PPE is the least effective means of controlling hazards due to the high potential for PPE damage, being worn incorrectly or improper selection for the existing hazard level. PPE increases the physiological effort required to perform a work task. Frequent breaks and dress downs may be required to prevent heat stroke or fatigue leading to human error. Furthermore, even choosing the appropriate level of PPE will only limit burn injuries to only first and second degree in the event of an arc flash. Burn injuries along with contusions, lacerations, concussion and broken bones can still occur due to the arc blast pressure wave that emanates out of an arcing fault event. Open panel CBM data collection is inherently high-risk work; without controls it should only be done as a last resort. 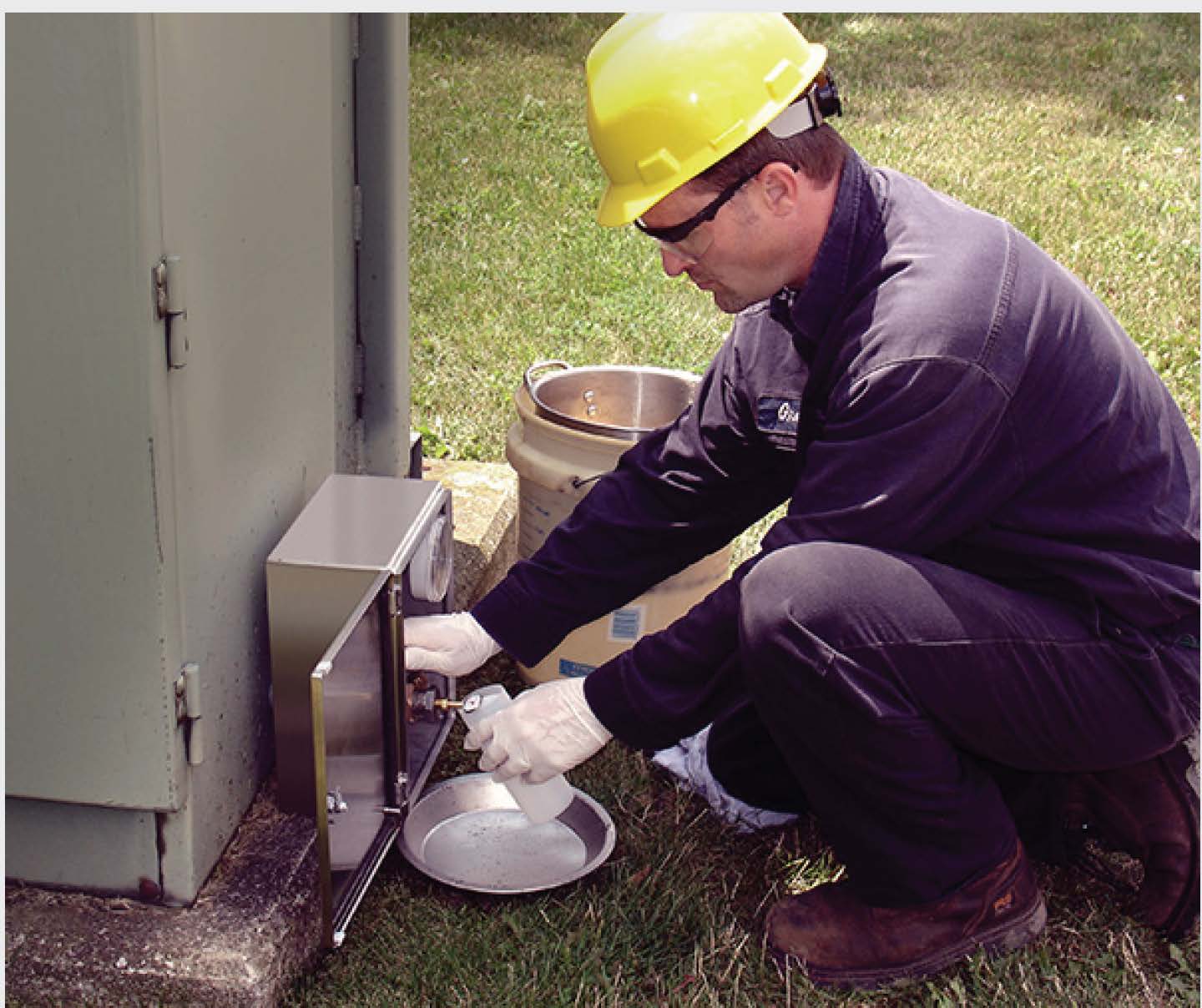 Beyond the formal adoption of the Hierarchy of Risk Control Methods, NFPA 70E 2018 Edition has also codified the need for human error to be considered as part of the Risk Assessment Procedure (RAP) for any work task under consideration. The document recognizes human error will increase the likelihood of an arcing fault, arc flash or shock exposure to the Qualified Person. For CBM inspections, the greatest risk of human error occurs when removing a bolt-on cover to be able to see into the electrical equipment. Quite often, there is limited electrical equipment construction documentation available and the exact internal nature of the electrical equipment is not known until it is opened by the inspection personnel. The Qualified Person does not know how close the energized conductors are and often work in restricted spaces.

Although not specifically mentioned in Table 130.5(C). opening an EMSD cover like that of an infrared window does not expose bare conductors or circuit parts, and to our interpretation and verified by others we have spoken to who were on the NFPA 70E Technical Committee, is that no PPE would be required. In this manner, the use of an EMSD and changing work processes to keep equipment in a closed and guarded condition while performing CBM tasks falls into the "Substitution" method guidelines of the Hierarchy of Control.

Finally, the language around Energized Electrical Work Permit (EEWP) requirements in the NFPA 70E should be mentioned. An EEWP is required whenever personnel will perform work within the Restricted Approach Boundary or when personnel interact with equipment in such a way that an increased likelihood of injury from exposure to an arc flash hazard exists - even if conductors or circuit parts are not exposed during the work. However, there is an exemption to the need for an EEWP for thermography, ultrasound or visual inspections provided the Restricted Approach Boundary is not crossed. At first blush, one might think that this gives a blanket EEWP exemption for open panel thermography. However, this only means that an EEWP may not be necessary but the Hierarchy of Risk Control Methods must still be followed when completing a Risk Assessment Procedure. In addition, an EEWP will still be needed if, in the process of removing the panel cover or opening a door, the Restricted Approach Boundary will be crossed. In my experience, crossing the Restricted Approach Boundary when removing a panel cover is a virtual certainty on most electrical equipment and so an EEWP should be executed. When opening a hinged door, this may not be the case but only prior user experience with the equipment will validate that assumption.

The language of the NFPA 70E 2018 Edition does not go so far as to mandate the use of specific electrical safety devices. However, a strict following of the Hierarchy and the statements embedded in Table 130.5(C) lead us to conclude that it is difficult to justify not using EMSD's as a matter of standard practice. Indeed, in the event of an arc flash or electrocution incident involving open panel collection of CBM data, the end user would be forced to justify to OSHA and possibly in civil litigation, why they had not adopted this approach that is both readily available and cost effective to implement. The use of Infrared windows, for instance, has gained wide acceptance over the past 10 years with virtually all OEMs offering optional solutions for virtually all electrical equipment types. Retrofit solutions of IR windows or custom replacement panels with built in IR windows are also commonplace. Embedded ports or sensors for collecting ultrasound data are also available from several vendors and are especially useful for equipment greater than 1 kV. Motor Test Access Panels and external oil sampling extension kits are also widely available for retrofit on existing assets. CBM data collection can provide valuable insight into electrical equipment health and drive more intelligent decision making as to when to perform physical intervention maintenance tasks. Most of this must be done with the electrical equipment energized and under normal load conditions to allow the technology to catch the anomalies. The NFPA 70E recognizes the risk inherent with CBM data collection and is pushing for safer data collection practices via the most recent changes including the formal adoption of the Hierarchy of Risk Control Methods as well as updates to other language and reference tables in the document. If they have not already, end users and maintenance personnel should revisit their work task risk assessments and consider implementing an EMSD strategy to mitigate hazards, reduce risk, and comply with the intent of NFPA 70E. Failure to do so not only puts people at increased risk of injury or death but could also result in an expensive legal lesson.

The Advantages of Investing in IR Windows