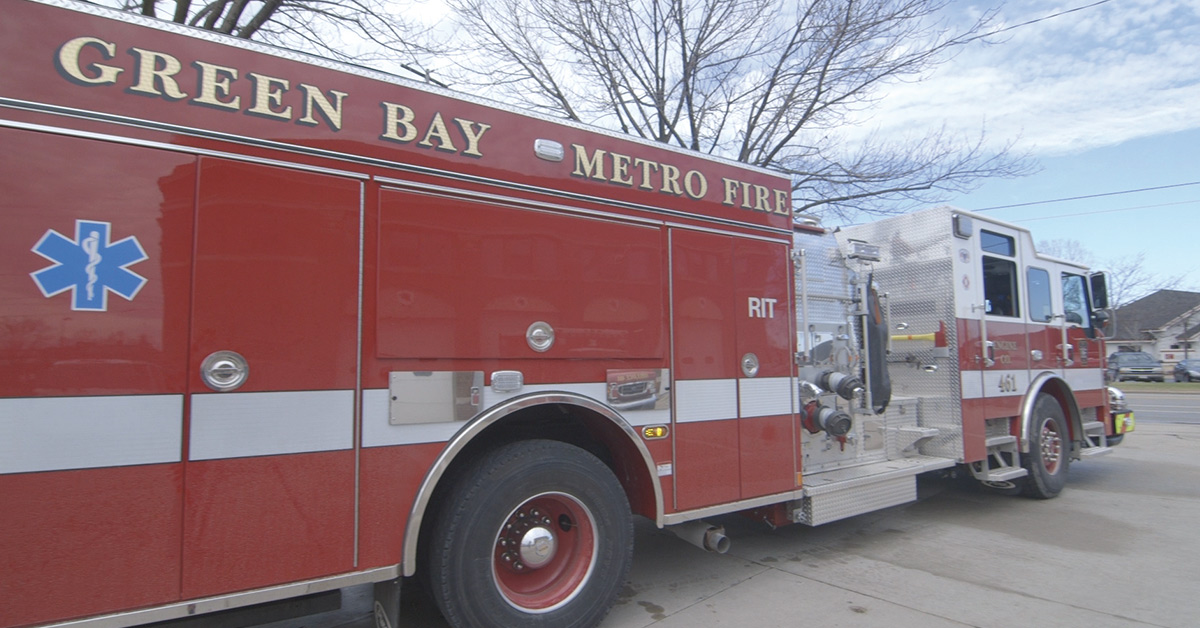 New technology opens up new possibilities. This is a truth that the Green Bay Metro Fire Department (Wisconsin, USA) knows all too well. The department has always kept an eye on how new technological developments can enhance the safety of its team members and victims during firefighting operations. In that respect, Green Bay Metro firefighters have recently upgraded their gear with thermal imaging cameras (TICs) from FLIR Systems.

The Green Bay Metro Fire Department has almost 200 firefighters. They work from eight fire stations — seven in the city and one in Allouez — altogether covering an area which is home to about 125,000 people.

“Fire is a very hostile atmosphere for most people, including firefighters,” says Brent Elliott, Division Chief at Green Bay Metro. “When you have smoke that is so thick that you can’t see your hand in front of you, and you couple that with high heat, it’s an atmosphere that’s enough to scare the best of us. The key is being able to rely on the right tools that can help you get through that situation. When you have a tool that allows your team to see through that smoke, it creates a comfort level that allows you to do your job more efficiently and safer than ever before.”

The Green Bay Metro Fire Department selected the FLIR K50 thermal imaging camera to be included in several of its engine and ladder company trucks. The team has been using thermal imaging cameras for structural firefighting ever since the technology was available. But now with the new cameras from FLIR, things have changed dramatically.

Brent Elliott: “The thermal cameras allow you to scan an area very rapidly, which is of crucial importance. With older models of TICs, you were only able to search inside a structure, whereas with the new cameras, you have sufficient resolution to allow you to scan the inside as well as the outside of a building, so you have a complete idea of what is happening. Scanning the outside of a structure before we go in has become a standard procedure for us, because it can guide us exactly to where we need to be, to the target areas that are most affected.”

“There are basically two main strategies for addressing a fire: getting the fire out and getting the people out. Thermal imaging cameras help us in both cases.”

But the use of thermal imaging cameras is not limited to fire suppression. The Green Bay Metro fire department also uses it for a variety of other tasks, including night time search and rescue, water rescue and detection of hazardous materials. And whenever extinguishing activities are finished, a thermal imaging camera is the ideal tool to overhaul the structure in search of hot spots or hidden fires.

“Thermal imaging cameras allow us to control the atmosphere, by identifying a structure’s flow path and air track,” says Brent Elliott. “This makes it possible to effectively control the fire.”

There has long been a widely held belief that attacking a fire with water from outside the building would push the fire further into the structure, making conditions beyond the fire worse and potentially increasing the risk to firefighters and trapped victims. However, recent research has proven that applying water to the fire as soon as possible from the outside softens the target (often lowering temperatures by hundreds of degrees) and helps firefighters gain the upper hand.

Having used the FLIR K-Series thermal imaging cameras for more than a year now, the outcome is very positive at the Green Bay Metro fire department.

“The camera is very compact, light and easy to attach to our coats. One of the great advantages of our new cameras in my opinion is the ability to take pictures. This way, you can actually go out and share with your colleagues exactly what you have seen inside. The temperature scale and gradient display are also vital to our operations. It gives us total clarity about the environment we are operating in and therefore it significantly enhances the survivability of occupants as well as firefighters.”

The pocket-sized FLIR One transforms a mobile device into a powerful thermal imager that sees heat and accurately measures temperature. The FLIR One mounts to an iPhone and will give the officers a three dimensional look at the fire and at the building the fire is consuming. “By deploying this technology, Officers that respond to a fire can keep a constant watch on the fire without taking the tools away from the crews going in,” says Brent Elliott. Today, two Battalion Chiefs and two Division Chiefs are using a FLIR One.