A new, efficient leak-detection solution for monitoring fugitive emissions and hydrocarbon leaks 24/7 is helping reduce the environmental impact of emissions, reduce operating costs, and even prevent potential regulatory fees for a US oil and gas company.

Fugitive emissions and hydrocarbon leaks at an oil and gas site can cause devastating explosions if they’re not caught early. It’s not only a risk to the facility, but the surrounding community. That’s why an upstream oil and gas company in the Denver-Julesburg (DJ) Basin of Colorado demanded an  efficient and remote way to monitor their oil pads 24/7. The company drills on approximately 300 oil pads in the DJ Basin, all located in populated areas near homes and schools. If they missed a leak at one of their oil pads or caught it too late, the company would be forced to evacuate thousands of people. 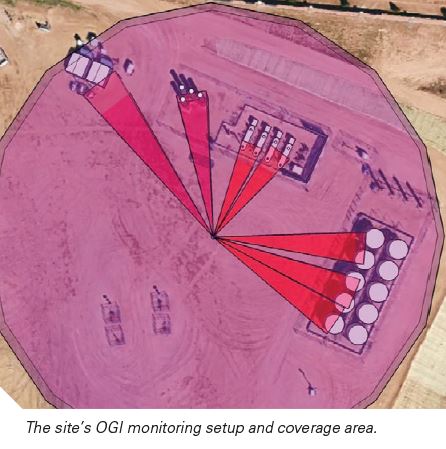 The oil and gas company’s typical monitoring routine required driving onsite every few days to visually or audibly inspect for leaks and broken equipment. In the hours and days that the oil pad was left unmonitored, a catastrophic leak could have occurred. “They wanted an added level of safety, and to be able to reduce physical site visits by automating this type of monitoring,” says Andrew Hinz, Director of Sales and Strategic Accounts at Twin Eagle Consulting.

The company approached Twin Eagle for help. Twin Eagle partnered with Pixel Velocity, an industrial digital software company, to develop a custom leak-detection system. It combined an optical gas imaging sensor with leak-detection algorithms to automatically detect, visualize, pinpoint, and alert users to gas leaks via email or text in real time. This solution would give the oil and gas company unified management and the ability to monitor their facilities remotely, from an offsite desktop PC or mobile device.

The system included a FLIR G300a Optical Gas Imaging camera on a pan/tilt head, a Bosch pan/tilt/zoom camera, and Pixel Velocity’s Event Velocity software for the operating platform. Event Velocity is a mapbased, user-interface monitoring software with intelligent edge sensors and industrial control systems that can continuously and autonomously monitor installations. By bringing different data streams such as video, audio, and optical gas imaging into one single user-interface, the system proactively supported remote inspection and virtual monitoring. “This gave us a high level of automated use; Pixel Velocity’s algorithm can take the info from a FLIR camera, sense the gas, send an automated alert to the customer, and record that event,” says Hinz.

The oil and gas company selected one oil-pad site to test out the custom solution. To set up the system, Twin Eagle installed a 40-foot telephone pole with 24 V DC power in the center of the site. They chose this specific location so that the FLIR G300a camera would have maximum coverage and optimal resolution.

One of the primary reasons Twin Eagle selected the FLIR G300a camera is for its ability to detect spectral changes in the atmosphere, as well as adjust for diurnal swings that cross exposure settings. This allows 24/7 use across seasons, including in fog, rain, or snow. The oil and gas company had an interest in visualizing 20 different hydrocarbons, including benzene, ethanol, methane, and propane. The FLIR G300a had the capability to detect each of these gases and more.

Within the first three weeks of operating the new monitoring system, it detected two leaks that the control system didn’t. The automation supervisor received alerts and video on a mobile device while in the
field. Whether he was in the office or out at another site, he was able to immediately react and deploy field technicians who repaired the leaks within 30 minutes of detection. In the past eight weeks, the oil and gas company discovered four leaks that they were able to fix. “They can be more precise with their resources, more precise with their people, it’s fewer miles on their trucks, and 24/7 coverage compared to looking at it 15 minutes per day,” says Hinz. With automated remote monitoring, they reduced site operating costs by approximately 35 percent.

Twin Eagle’s leak-detection system allowed operators to react to situations instantaneously and make intelligent operational decisions in real time. With automated analytics and continuous coverage of assets, leaks can be detected as they occur, not hours oed operational efficiency, bolstered site safety, and reduced costs to inspect and operate the site.

Want a printable version of this application note?