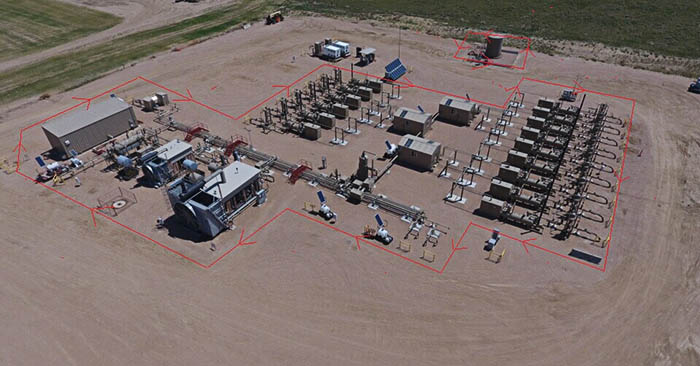 During hydraulic fracturing (“fracking”), part of the process involves injecting sand to keep pores of a well open. When the well is brought back online after fracking, some of that sand burps back up to the surface and into a separator.

A separator sits on the surface and separates the oil, gas, and water using heat from an internal fire tube. Gas gets siphoned off and funneled to a sales meter and then eventually to homes and businesses. Oil and water collect in onsite tanks and are eventually hauled away by tankers. The unwanted byproducts, paraffin and sand, accumulate in the separator tanks or vessels and must be removed to prevent irreparable damage to the separator’s fire tube. If sand collapses the fire tube of a non-flanged separator, then the only option is to replace the entire vessel. Non-flanged separators make up a majority of the Noble Energy inventory. Repairing or replacing the fire tube is only possible in newer, more expensive flanged separators.

“These separators, on average, are about $100,000 apiece,” said Doug Hess, LDAR Manager for Noble Energy. “If the sand builds up and sits on that heating element, it will eventually cave that heating element in, which can cause catastrophic failure of the separator itself. That can lead to two things; both are pretty bad. One is a leak of gas, oil and water outside the separator. Two is that it can also cause fires.”

Sand traps and other filtering mechanisms proved ineffective at keeping sand out of the separators. If sand couldn’t be kept out, then it had to be removed. Sand and paraffin are cooler than oil, gas, and water, so Noble Energy engineers originally rubbed each vessel’s belly to try to feel for temperature differences. This unreliable method resulted in sand-damaged tanks not being identified and false positives— where sand removal maintenance crews were brought in unnecessarily.

While removing paraffin is simply a matter of heating up the separator and treating it with an inhibitor chemical, sand removal is another matter. It requires a full shutdown of the separator and two crews of workers, one running hoses and another running a vacuum truck. It’s a labor-intensive process, and when performed unnecessarily it resulted in lost production and man-hours.

To address the costly replacement of separators due to sand buildup and improve the efficiency of their separator preventative maintenance plan, Noble Energy created a sand measurement method using the FLIR GFx320 optical gas imaging camera.

Noble Energy was already using FLIR OGI cameras for its leak detection and repair (LDAR) program. They invested in the cameras to satisfy Colorado Regulation 7 – Control of Ozone via Ozone Precursors and Control of Hydrocarbon via Oil and as Emissions. With more than 30,000 leaks detected, engineers were already familiar with how to operate the cameras.

Eventually the team realized that the same technology being used to detect invisible gas leaks could also drive the preventative maintenance program for separators.

“We have this camera that uses thermal imaging technology and is actually powerful enough to see what’s happening behind the thick metal walls of the separators. By using the temperature differences—oil being hotter and sand being cooler—we can determine if there’s mounding within the separators themselves,” said Hess.

It takes only a few minutes to gather temperature set points on each tank. The rainbow palette in thermal images shows specific colors varying with temperature (see figures A & B). “High-contrast rainbow shows us the best temperature differences and our engineers like the range,” said Landon Hawkins, the engineer responsible for developing much of Noble Energy’s sand measurement method.

At each separator, Hawkins first stabilizes one of two FLIR GFx320 cameras on a monopod. He sets up to view the sides of the separator tank and changes settings to manual mode to establish set points. The oil bath in the separator usually hovers between 90° and 100° Fahrenheit (32° and 37.7° Celsius). The sand pile registers about the same as the ambient temperature. So if ambient temperature is 60°F (15.5°C), then there will be a 30°F to 40°F (-1°C to 4.4°C) delta between the oil bath and sand pile. Sand usually sits on the bottom of the vessel while paraffin is typically more jagged and in the middle of the vessel. Paraffin will stick to the side of the vessel whereas sand will not.

For separators in the monitoring program, Noble Energy compares monthly images to decipher how quickly sand accumulates and when it’s time for a clean out. There are two key elements needed for the program to work properly. First, the cameras have to be designed and evaluated for use in hazardous areas due to fire danger near the separators. Such cameras are carefully constructed to control energy (electrical and thermal) to nonincendive levels so any short circuit or failure will not cause sparks—an important feature in explosive atmospheres.

Because it has been evaulated by MET Laboratroies to be compliant wiht ANSI/ISA 12.12.01-2006 and CAN/CSA C22.2 standards for use in hazardous locations, Hawkins and his team can use the GFx320 to get close to each separator. They can capture multiple angles and avoid sun glare that can heat up the separator surface.

According to Hawkins, “Before the GFx320 camera I sometimes could only take a picture of the front of a tank because I couldn’t get within five feet of the separator right next to it.”

As is evident in the aerial photograph, rows of tightly sited separators limit access to each vessel. “Having a camera that's cleared for use in hazardous areas has made a world of difference in doing this program,” said Hess. “We are able to get into nooks and crannies where we weren’t able to get before.”

Second, the images must look similar, which means the same camera operator needs to capture and manipulate, or finesse, the images. “We’re always trying to get a picture that looks similar for trending purposes. That way when we compare it with other images it’s easier to see the differences. If you get multiple people gathering readings, then different eyes make different pictures,” said Hawkins.

Either Hawkins or someone trained specifically on his method evaluated more than 7,000 separators in 2017. According to Hess: “Landon has that finesse and has trained some other guys on the method he’s developed. Landon is definitely the spearhead of the entire program.” Of the 7,000-plus separators analyzed, 300 were shut down for sand removal.

Hawkins and his team use two FLIR GFx320 infrared cameras to optimize Noble Energy’s preventative maintenance program on its separators. While camera experience is vital to the success of the program, Hawkins continues to improve and document his method to make it easier for other engineers to learn.

Meanwhile, the monitoring program has already paid major dividends by identifying 300 tanks in less than a year with sand piles high enough to endanger their fragile fire tubes. There’s no way to know if all 300 of those tanks would have failed without being cleaned out. Even if monitoring with the GFx320 prevented only one failure, then it saved the $100,000 separator replacement cost as well as wasted man-hours from the maintenance team.

The proof is in the sand. “I work closely with the maintenance team that does all of the clean-out work and they say we’ve been 100 percent accurate so far. Every separator we’ve identified for clean out based on this method did in fact have significant sand build-up,” said Hess.