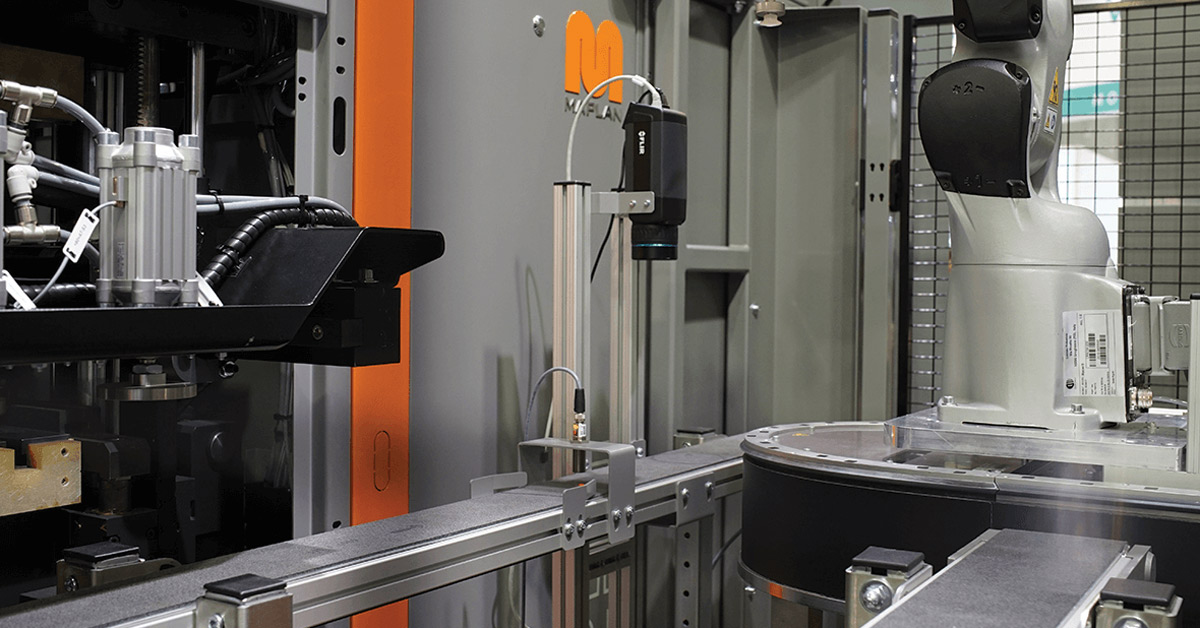 Machine vision inspections using visual cameras can occasionally cause recognition problems if the product and background have too little color contrast. In such cases, thermal imaging cameras can be a practical solution - especially if the product has a different temperature than the transport medium. In many cases such temperature differences are caused by the production process. Injection molding applications are ideal for this, for example, because the produced parts come out of the machine here at a relatively high temperature.

At the German Rubber Conference DKT 2018 in Nuremberg, two Austrian companies presented a possible solution in this area.

For the Nuremberg trade fair DKT, MAPLAN planned the on-site production of give-aways for trade fair visitors. The company produced customizable rubber luggage tags in an extrusion line; they were then repositioned by a robot and labelled using an inkjet printer.

As with many other projects, MAPLAN worked closely with RELISTE GesmbH as the integrator to implement this automation solution. RELISTE has offered high-quality products to its customers in the Austrian market for more than 45 years, while the RELISTE Vision Group, founded in 2008, works as an integrator for FLIR thermal imaging cameras in the automation sector.

LOW CONTRAST: TEMPERATURE AS A SOLUTION

In the planned system, the weak contrast ratios between conveyor belt and product initially proved to be a challenge. In a conventional pick and place application, a robot was to remove the luggage tags from the conveyor belt and position them for printing with an inkjet printer, which was ultimately to personalize the tags for the stand visitors.

The robot should receive the information as to where the product is on the conveyor belt from a camera. But with lightgray luggage tags on a light-gray conveyor belt, doubts quickly arose about the functional stability when using a visual camera.

(The fixed FLIR A615 conforms to a wide range of standards, making it a plug-and-play device for third-party machine vision software)

The model RELISTE recommended was a FLIR A615, which offers 640 × 480 thermal resolution. "The thermal imaging camera does not use visual light, but the heat radiation resulting from the extrusion process for reliable product detection. The solution convinced us because it was very simple and worked right from the start," adds MAPLAN's technical manager Rudolf Eisenhuber.

"The high thermal imaging resolution of the FLIR A615 also enables quality analysis, which we would like to demonstrate with more complex injection molded parts in the future."

For the future, MAPLAN and RELISTE are considering the possibility of additional evaluation of thermal information for rubber injection molding machines. The use of a thermal imaging camera could also provide additional information about the quality of a product. This method is particularly interesting for complex shaped components. In this regard, FLIR thermal imaging technology could contribute to optimizing the injection molding process