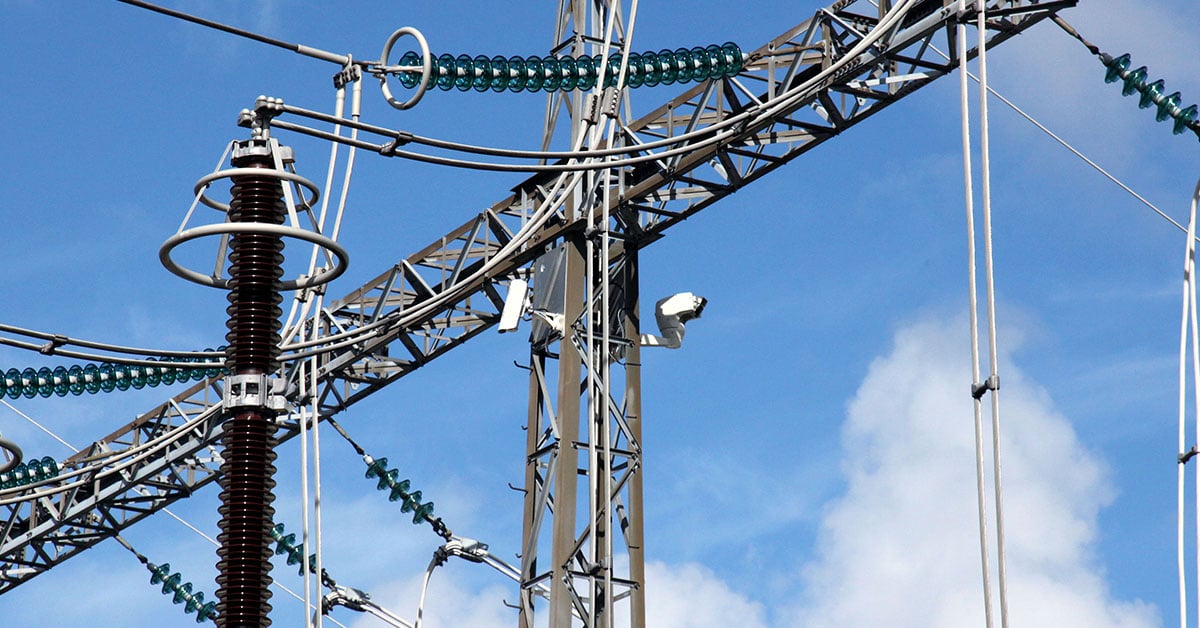 In modern society life without electricity is unthinkable. If we are cut off from the grid for an extended period of time this could potentially cost more than just money. With hospitals and other emergency services depending on electricity an extended power failure might cost lives.That is why the Norwegian government and energy companies like Lyse Energy have started enhancing the security at critical points in the electricity network with thermal imaging cameras.

One of the locations where thermal imaging cameras were installed to enhance the perimeter protection is the Lyse Energy electrical substation at Stavanger, Norway. The company that installed the thermal cameras is Noralarm AS. This Norwegian security company is also responsible for manning the control room. “We investigated a number of different security solutions and thermal imaging is the only solution that works”, says Torje Knag, CEO of Noralarm AS.

NorAlarm is one of Norway's leading alarm and security companies and the only one in the region with its own police and insurance-approved (FG) alarm monitoring centre operative 24/7, 365 days per year. Established in 1998 the company's primary activities are within the supply of operational services, together with sales, design, installation and maintenance of high-tech security solutions linked to a dedicated alarm centre for the professional and private market.

Ensuring continuity of power distribution through the electrical substation security is of utmost importance, to prevent damage due to vandalism or terrorist attacks. But there are other threats as well, explains Knag. “Breakdown caused by wear can be very dangerous as well, not to mention very costly. That is why we decided to include on-line thermographic monitoring in the security system. By constantly monitoring several key parts of the electrical substation we ensure that faults are detected as they develop. In that case the energy company can reroute the power through other parts of the infrastructure, to prevent immediate breakdown. This buys the repair teams some time to order parts and plan the repairs.”
This combined alarm system, including a perimeter protection intruder alarm and online thermographic temperature alarm ensures a high return on investment, according to Knag. “By combining both security and condition monitoring in one system this system has a great added value. We expect that the thermographic part of the installation can lead to a decrease in the number of breakdowns of 20%, which in turn might lead to savings in excess of 8 million Euros each year.”

Other methods produce too many unwanted alarms

For the perimeter protection system Noralarm AS used FLIR SR-Series thermal imaging cameras. “I have visited several other pilot projects with other intruder detection methods, such as sensor cables and visual light closed circuit television (CCTV) cameras and in my experience these technologies do not work”, adds Noralarm Sales Manager Mikke Ståhl. “Those other technologies simply produce too many unwanted alarms to function properly.”

This combination of video analytics software with thermal imaging cameras also reduces the unwanted alarm rate, adds Hjørnevik. “The thermal contrast between a person and his surroundings is much bigger than the color difference in most situations. So for a CCTV camera based intruder detection system to be accurate its sensitivity needs to be very high, but this leads to a large amount of unwanted alarms. Due to the high contract between an intruder and his surroundings in the thermal image the sensitivity of the detection can be set much lower for a thermal imaging based intruder detection system, leading to a much lower unwanted alarm rate.”

“In fact, the unwanted alarm rate at the Lyse Energy electrical substation is next to zero”, adds Ståhl. “We have performed extensive tests and in all our tests the system detected the intruders, regardless of lighting and weather conditions. In my experience other technologies like CCTV video detection, sensor cables and such cannot reach such a low unwanted alarm rate without compromising on intruder detection.

For the perimeter protection of the Lyse Energy electrical substation in Stavanger FLIR SR-Series thermal imaging cameras were used. These cameras contain an uncooled Vanadium Oxide (VOx) microbolometer detector, which in the case of the Lyse Energy substation produce thermal images at a resolution of 320x480 pixels, but FLIR also offers models with resolutions of 640x480 pixels or 160x120 pixels. To enable these cameras to cover the entire perimeter without flaw FLIR also offers a wide variety of optics. “Incorporating the cameras in a security network is relatively simple”, says Hjørnevik. “We linked the analog video output of the FLIR SR-Series cameras to video encoders which digitize the footage. Then it is sent over Ethernet to the local server, which analyses the footage and sends the footage and alarm data to the central Noralarm control room in Stavanger.”

Apart from the thermal imaging security cameras the security system also includes thermography cameras for on-line condition monitoring. According to Ståhl, Noralarm included the thermographic temperature alarm system in the installation to increase the installation’s ‘value for money’. “We are always looking for added value in our systems and we heard that periodic maintenance inspections are performed with handheld thermal imaging cameras at the electric substation, so we decided to include on-line thermographic monitoring in our design for the security system.”

The thermographic thermal imaging cameras included in the system are FLIR Fixed Condition Monitoring Smart Sensors, which are mounted in a waterproof housing. These radiometric thermal imaging cameras produce thermal images at a resolution of 320x240 pixels. Each pixel in the thermal image is non-contact temperature measurement with a thermal sensitivity better than 50 mK (0.05 °C), enabling it to capture the finest image details and temperature differences. The built-in logic, memory, and data communications allow them to compare the temperatures in their images with user-defined settings, and send that data to a central monitoring station for trend analysis and alarm functions. In the case of the Lyse Energy substation in Stavanger the thermography monitoring system will automatically sound the alarm if particular areas within the thermal image reach above the previously determined threshold temperature.

“The four FLIR Fixed Condition Monitoring Smart Sensors that are incorporated in the alarm system continually monitor the critical parts of the substation”, explains Ståhl. “If any part of the monitored equipment rises above the threshold temperature an alarm will go off. The energy company can then reroute the power to prevent breakdowns and given the fact that these breakdowns cost a lot of money I think the added value of this thermographic system is definitely one of the reasons why Lyse Energy chose our security system for this substation and not one of our competitors.”

By combining the advantages of FLIR thermal imaging security cameras with thermographic on-line condition monitoring Noralarm has provided the Lyse Energy substation with the best all round security solution currently available. With this security system Lyse Energy can ensure that its end users receive a continuous energy supply, undaunted by vandalism, terrorism or breakdowns caused by failing components.