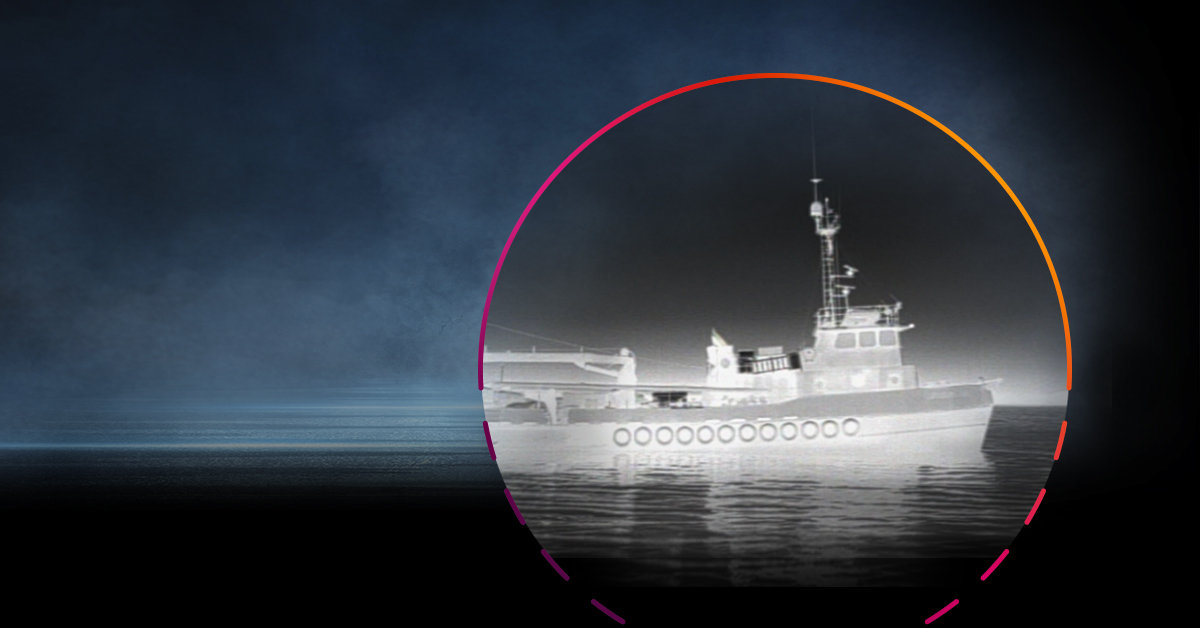 Metrological effects of fog and rain on IR camera performance

The “How Far...” question is most often answered under ideal climate conditions, meaning that your next questions should be: “What happens to the range in fog, rain, or other conditions?”

Although thermal imaging cameras can see in total darkness, through light fog, light rain, and snow, the distance they can see is affected by these atmospheric conditions.

The transmittance of infrared radiation

Even in clear skies, inherent atmospheric absorption places limits on how far a particular infrared camera can see. A thermal imaging camera produces images based on the differences in thermal radiation that an object emits. The farther this infrared signal has to travel from the target to the camera, the more of that signal can be lost along the way.

This means that the attenuation factor needs to be taken into account, the ratio of incident radiation to radiation transmitted through a shielding material. Humid air acts as a “shield” for infrared radiation. Summer month atmospheres usually have a higher attenuation compared to winter months due to increased humidity levels. Generally speaking, clear skies and good weather conditions during winter will allow you to see farther with a thermal imaging camera than in summer.

But humid air is just one example of how infrared radiation can be lost. There are other climatic conditions that are far more detrimental to the range of a thermal imaging camera.

Fog is a visible aggregate of minute water droplets suspended in the atmosphere at or near the surface of the earth. When air is almost saturated with water vapor, this means that the relative humidity is close to 100%. This allows fog to form in the presence of a sufficient number of condensation nuclei, often in the form of smoke or dust particles.

There are different types of fog. Advection fog is formed through the mixing of two air masses with different temperatures and/or humidity. Another form is radiative fog. This is formed in a process of radiative cooling of the air at temperatures close to the dew point.

Some fogbanks are denser than others because the water droplets have grown bigger through accretion. In fog conditions, droplets can absorb more water and grow considerably in size. The question of whether scattering is less in the IR waveband compared to the visible range depends on the size distribution of the droplets.
There are different ways to classify fog. An often-used classification is the one used by the International Civil Aviation Organization (ICAO). According to this system, fog can be classified into 4 categories:

MODTRAN is an atmospheric radiative transfer code created and supported by the United States Air Force. It has the ability to model the atmosphere under a variety of atmospheric conditions. It can predict atmospheric properties including path radiances, path transmission, sky radiances, and surface-reaching solar and lunar irradiances for a wide range of wavelengths and spectral resolutions.

How far you can see through fog or rain with a thermal imaging camera will also depend on the climate in which you are using the camera and the type of aerosol which is present in this specific climate. 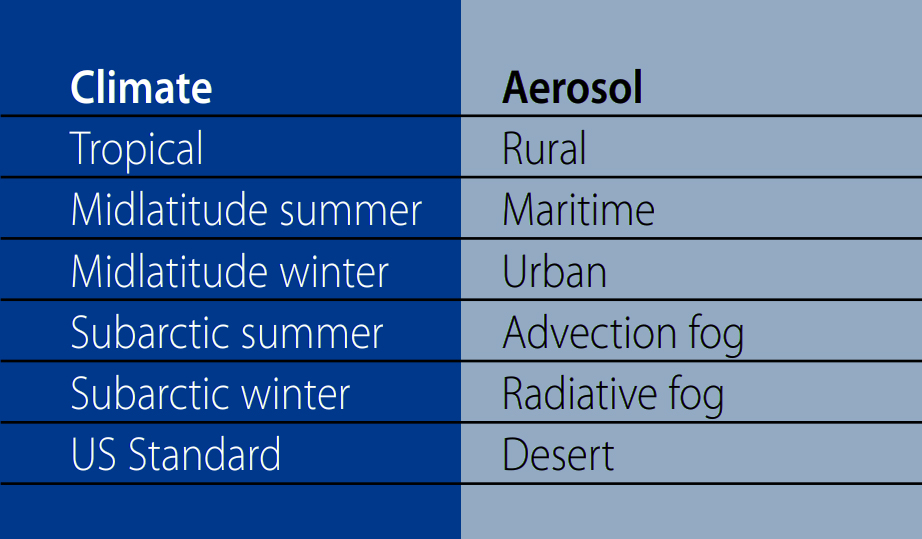 The input data for the MODTRAN model

The input data for the MODTRAN model are the above mentioned specific climates and aerosols but also the visibility according to ICAO categories, geometry and length of the atmospheric path, and the temperature and emissivity of target and background.

This means that your vision will be more compromised in foggy maritime conditions than it would be on land, regardless of the climate type.

Just as the type and thickness of the atmosphere have an influence on how far you can see through fog, the type of infrared camera and the waveband in which the camera operates is also important

There are two wavebands of importance for thermal imaging cameras: 3.0-5μm (MWIR) and 8-12μm (LWIR). The 5-8μm band is blocked by spectral absorption of the atmosphere by water vapor to such a tremendous extent that it is rarely used for imaging.

Thermal imaging cameras that are equipped with uncooled sensors are designed to work in the longwave infrared (LWIR) band between 7 and 14 microns in wavelength, where terrestrial targets emit most of their infrared energy and uncooled detection is easy.

Thermal cameras that are equipped with cooled detectors (where the sensors are cooled to cryogenic temperatures) are the most sensitive to small temperature differences in scene temperature and are generally designed to image in the midwave infrared band (MWIR) or in the longwave (LWIR) band.

The spectral transmission is different in the MWIR and the LWIR bands. Therefore there will be a difference in how you can see through fog with a thermal imaging camera equipped with an uncooled LWIR detector compared to a cooled MWIR detector.

The spectral transmission of the atmosphere for varying ranges enables a simple qualitative comparison of the visibility in different atmospheric windows.

Figure 1 shows the spectral transmission for CAT I fog in midlatitude summer and rural aerosols. In the visible spectral waveband (0.4 - 0.75 microns) the transmission is significantly lower than in both thermal IR windows (between 3-5 and 8-12 microns). In these conditions, a thermal imaging camera will see significantly farther than the naked eye regardless of whether it is using a longwave or midwave detector. 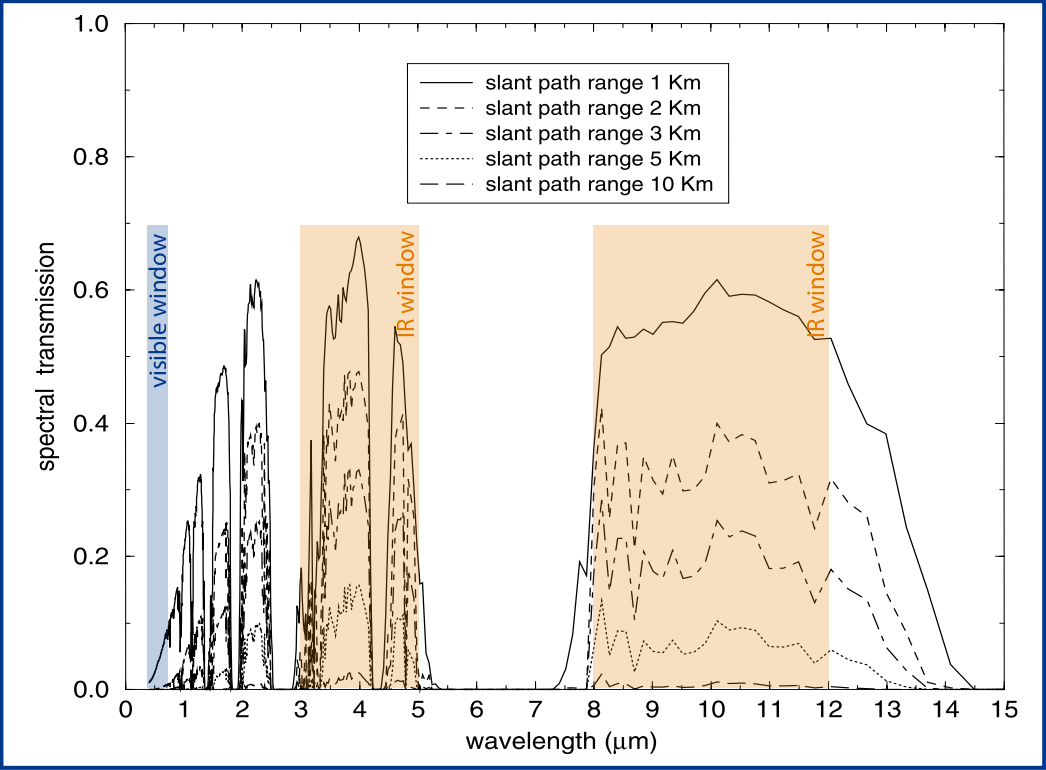 When we reduce the visibility to CAT II conditions with radiative fog in the model, it predicts that only the LWIR (8-12 microns) band is superior to the visible band, and that a midwave infrared camera will not see much farther than the naked eye. (Figure 2) 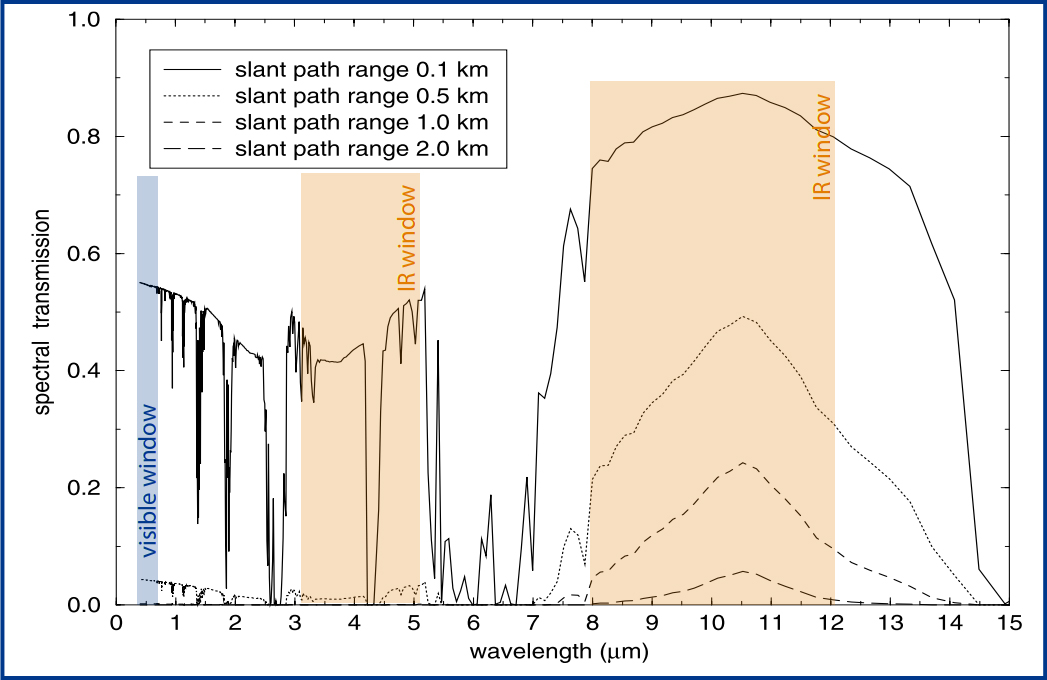 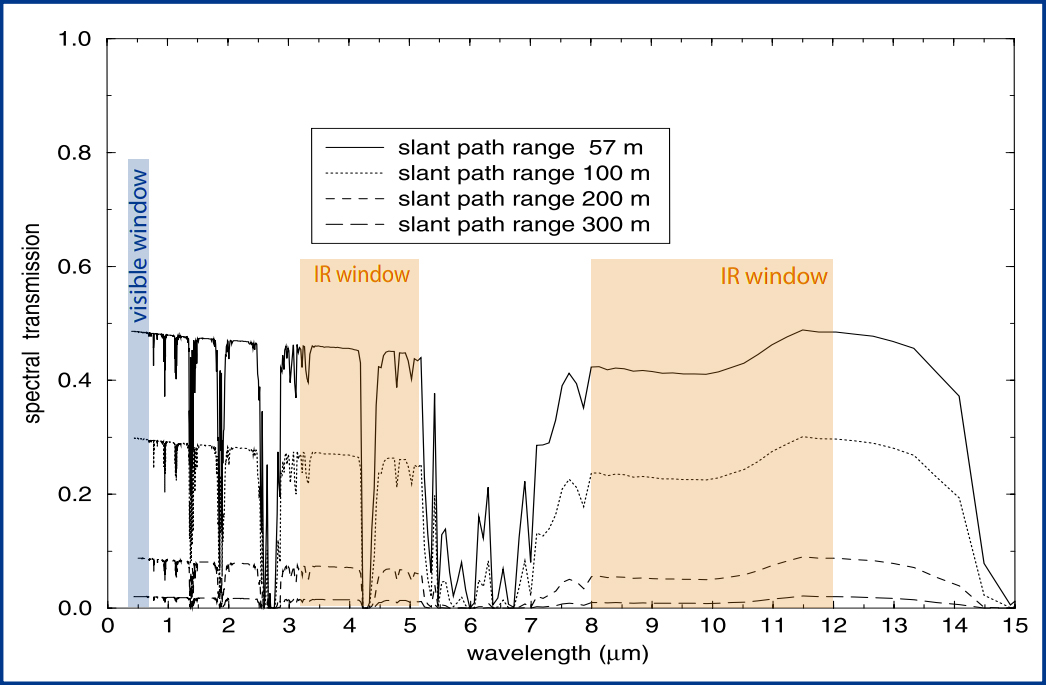 The transmission alone does not fully determine how far and what you can see, but the comparison between visual and IR transmission shows whether the atmosphere favors or discriminates against a certain waveband.

The conditions of the atmosphere alone aren’t enough to predict how far you can see through fog or rain. The size of the target and the temperature difference with the background both need to be taken into account. Furthermore, the limited spatial resolution of the optics and the detector, and the noise of the detector and signal processing also reduce the contrast radiance of target to background. The influence of the infrared sensor’s transfer functions on the contrast radiance is simulated with the TACOM Thermal Image Model (TTIM). This model simulates different types of IR sensors with focal plane arrays.

The table below compares the detection range (in kilometers) through fog with the naked eye (visual), a MWIR camera, and an LWIR camera, given a temperature difference of 10°C between the target and the background and a detection threshold of 0.15 K

For Cat I, the IR detection range is given in a range span, representing the variation within different climates and aerosols as specified in MODTRAN. With a LWIR camera, the best conditions occur in winter with low absolute humidity and a rural aerosol distribution. In the MWIR band, the detection range is best in conditions with high temperatures often seen in summer or tropical climates.

All detection ranges for IR are significantly better than the visual for Cat I fog. For Cat II fog, the result is four times better with a thermal imaging camera equipped with a LWIR detector compared to visual.

In Cat IIIa and Cat IIIc fog, there is virtually no difference between how far you can see with a thermal imaging camera and with the naked eye since the atmosphere is the limiting factor. Radiation does not penetrate through this dense type of fog in all (visible, MWIR and LWIR) spectral bands.

According to these models, the thermal IR band offers better range performance compared to the visual band in Cat I and Cat II fog. As such, thermal IR cameras are well suited to help users see through these types of fog. The models also suggest that thermal imaging cameras are potentially useful as landing aids for airplanes or as part of driver vision enhancement systems for the transportation and automotive industry.
Additionally, LWIR imagers achieve a higher degree of fog penetration compared to the MWIR band in all studied cases. For Cat II fog, the LWIR spectral band offers about four times better range performance compared to the MWIR band. However, sensor thermal sensitivity and the target signatures must be taken into account to arrive at the best system for any given application.

MWIR radiation is adversely affected by atmospheric pollutants and pollutant gases (possible increased atmospheric absorption and/or increase levels of in-path radiance – both of which reduce target image contrast), while LWIR is much less affected.
Rain can significantly reduce target contrast (due to increased atmospheric scattering and general obscuration) and LWIR and MWIR perform similarly in the presence of rain. IR system performance degradation due to rain is very range sensitive, experiencing a dramatic drop off in the 100-500 meter range.

Just like it is difficult to offer a simple answer to the question “How far can I see with a thermal imaging camera?”, it is equally impossible to say how much shorter the range will be in foggy or rainy conditions. This is not only dependant on the atmospheric conditions and the type of fog but it is also dependent on the IR camera used and on the properties of the target (size, temperature difference of the target and background, etc).

How Do Thermal Cameras Work?

How Far Can you Measure with a Thermal Camera?

Thermal Camera Specs You Should Know Before Buying

Can Thermal Imaging See Through Walls? And Other Common Questions