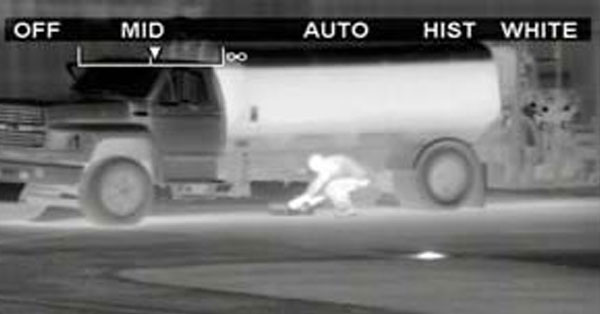 Thermal technology takes its place in perimeter protection. In today's troubled times, large industrial sites are in more danger of security breaches than ever before. With miles of perimeter fence and multiple controlled entrances to secure, large petrochemical plants are a complex security challenge, to say the least. To guard against the unwanted attention of terrorists or other groups bent on violence or otherwise disrupting plant operations, these sprawling sites are turning to thermal imaging – a technology previously considered only accessible to the military – to tighten their security networks. 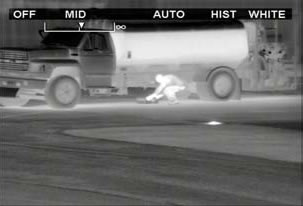 Thermal images, like the one shown above, allow you to see things from further away and with greater contrast than the conventional visible-light cameras used in security networks all over the world.

Nothing hides from a thermal imager

You can't hide your heat. More precisely, you can't hide your thermal energy. Everything emits thermal energy – even ice cubes – night and day, in good weather and bad. Thermal imagers allow you to see things from further away and with greater contrast than the conventional visible-light cameras used in security networks all over the world. They don't require external lighting, can't be fooled by camouflage, and can see man-sized targets from further away than comparable TV cameras. "Thermal imaging works when other technologies don't," said Andy Teich, President of FLIR Systems' Commercial Vision Systems division. "Thermal imaging is ideally suited to security applications," Teich continues "because it requires no lighting and provides superior threat detection day or night. Thermal imaging is the only technology that provides true 24/7 capability." Thanks to recent technological innovations in the mass production of thermal imagers, they are now affordable and available to security professionals in the US and abroad. Teich continued, "The ability to design and manufacture detectors, lenses, and camera core assemblies coupled with our expertise in military qualified products allows FLIR to offer military hardened products at volume commercial prices. By virtue of FLIR's supply of thermal imaging systems into high volume applications such as BMW's Automotive Night Driving Assist system, FLIR can offer thermal imaging systems to other commercial applications at breakthrough prices."