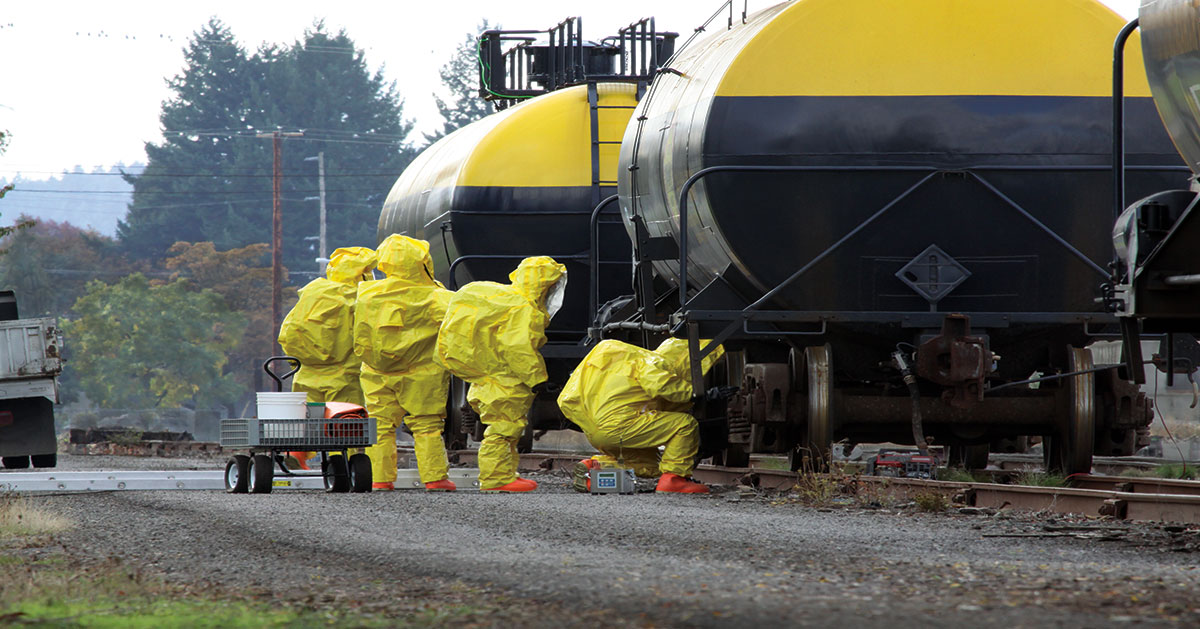 Responders rely first on their knowledge and experience, and then on the tools in their toolkit to keep themselves and the public safe. Chemical scenes can be chaotic and getting actionable information quickly is vital. Unknowns can be incredibly dangerous. Having the right tools in the toolkit and understanding their capabilities is critical to mission success. A gas chromatograph mass spectrometer (GC-MS) is one tool that provides on-scene chemical confirmation and actionable intelligence for responders.

Hazardous materials (HAZMAT) response scenarios can be a significant challenge to responders. Often, little information is available upon arrival at the scene. Threats can change rapidly, making tactical decisionmaking more difficult. The ability to quickly identify chemical material(s) on a HAZMAT scene is critical for protecting responders, the public, and the surrounding environment. Responders rely on a suite of tools to perform chemical detection and identifi cation onscene. Not all responders have access to the same suite of tools, making joint response efforts a necessity in some cases. A baseline working knowledge of all classes of chemical detection equipment is important because each sensor has a purpose that is tied to an actionable result (Table 1). Additionally, each tool can be used in tandem with other techniques. Portable and cost-effective colorimetric tools and lower explosive limit (LEL) meters help detect the presence of a class of chemical threats. Colorimetric test kits are most commonly used for fast presumptive information about a chemical – ranging from 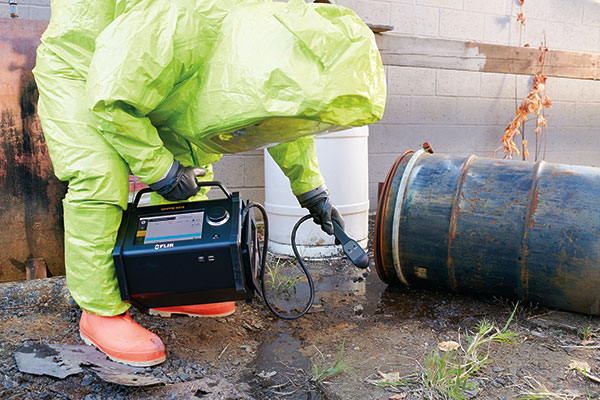 chemical warfare agents and toxic industrial chemicals to narcotics. Portable spectroscopic tools like Raman spectroscopy, Fourier-transform infrared spectroscopy (FTIR), ion mobility spectrometers (IMS), and high pressure mass spectrometers (HPMS) presumptively identify chemical threats, but with limited selectivity (the ability to distinguish and identify one chemical from another), restricting the ultimate impact of the information from these devices. Ideally, response teams will also include the use of a GC-MS to supplement scene assessment because it is a well-established confirmatory chemical identification technique. 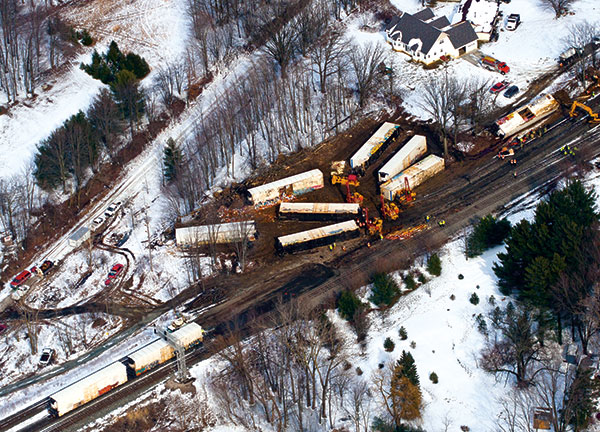 Gas chromatography mass spectrometry (GC/MS) instruments are essential in the laboratory environment and are considered the “gold      standard” for chemical identification. GC-MS systems are inherently selective and sensitive (the ability to detect very low levels of chemicals). Often, when a field sample (e.g., forensic investigation, suspected clandestine lab, etc.) is analyzed by an accredited lab, a GC-MS is involved. By directly probing the “fingerprint” of a chemical through mass spectrometry, responders gain a true confirmatory identification and substantially reduce the number of chemical misidentifications during on-scene response. GC-MS is selective, sensitive, and offers the broadest capability – making it the ultimate confirmatory tool. No two HAZMAT scenarios or response missions are the same. This application note presents two unique situations in which a person-portable GC-MS can be used to provide confirmatory chemical identification during on-scene response. The FLIR Griffin G510 portable GC/MS – shown in Figure 1 - was used to produce the analytical data presented in this application note.

Some HAZMAT scenarios contain more information than others. DOT-111 tank cars - commonly used in rail transport - are typically marked with an external label that identifies its contents. The train’s manifest links the car to that same material. When a train derailment involves a leaking tank car, initial responders must quickly assess and mitigate hazards.

The Griffin G510 person-portable GC-MS can be operated in Air Confirm mode to analyze vapors near a breeched railcar and confirm the identity of any chemical threats detected. Not only can tank car derailments pose an immediate threat to responders, but they can also create a risk of contaminating the surrounding environment. 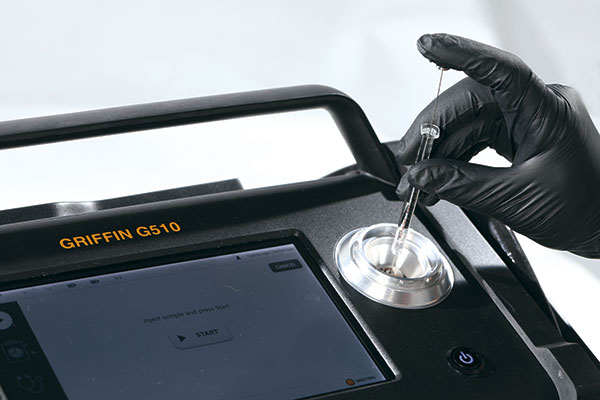 On-scene GC-MS can help responders determine the extent to which the material may have spread. Using solid-phase microextraction (SPME), responders can collect samples in aqueous environments like a ditch, creek, or other body of water. SPME extracts trace amounts of a chemical product from the water and is a sample collection method that does not require arduous sample preparation. The SPME fiber is injected directly into the Griffin G510 GC-MS for analysis and chemical identification. Even well after a derailment incident has been resolved, the Griffin G510 GC-MS delivers value. It can be used during remediation missions for subsequent analysis of environmental samples and identification of contamination. Long-term data collection campaigns may involve semiroutine analyses of samples from a response vehicle or mobile laboratory. A common chemical carried in tank cars is ethylbenzene, often used in the production of plastics and other synthetic materials. Figure 2 is a full GC/MS result and NIST confirmation of the presence of ethylbenzene detected using Air Confirm mode. Figure 3 is an alternative alarm view that simplifies and expedites data review in the field. 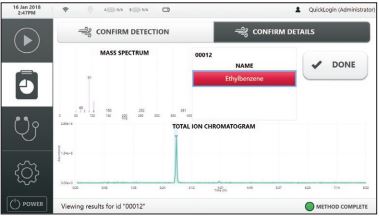 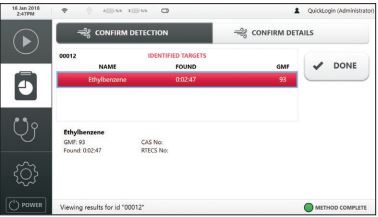 Many HAZMAT incidents are full of unknowns and have the potential to feel chaotic, as response tactics and decisionmaking may take place without all the desired information. For example, responders may arrive at a motor vehicle incident where unlabeled containers have been damaged during the collision, causing unknown white crystalline material not listed on the motor carrier’s manifest to leak out. In this situation, responders wearing appropriate PPE can use presumptive handheld tools like colorimetric test kits, FTIR, Raman, IMS, or HPMS systems to understand the basic threat nature of the material. The Griffin G510 GC-MS can be operated in Vapor Survey mode by responders wearing full vapor encapsulated PPE to confirm the identity of any highconsequence threats, enabling incident commanders to make data-driven decisions. If no vapor threats are found in an initial investigation, the responder can obtain a small sample of the crystalline material and return it to a warm zone for sample workup by an additional responder. This process involves the material being dissolved in a small amount of a solvent so that it becomes an organic liquid solution that can be injected into a GC-MS. Figure 4 demonstrates an organic liquid injection performed on the Griffin G510 GC-MS.

Figure 5 shows data obtained from the Griffin G510 identifying an unknown material such as parathion, an organophosphate-based pesticide and known carcinogen that is severely restricted for use in the United States. In a single sample, the system also detected and confirmed the presence of octane, a common straight-chain hydrocarbon. 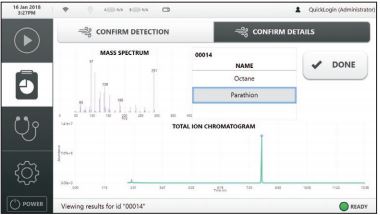 The identification of these materials helps responders choose appropriate PPE and better understand the nature of the hazard for subsequent cleanup efforts. Additionally, the high-fidelity data obtained from in-field GC/MS may be of use in subsequent legal proceedings against the motor carrier, shipper, and receiver.

GC/MS has long played a critical role in traditional laboratory-based chemical identification and is the gold standard for analysis. But chemical emergencies rarely occur in the safety of a laboratory. Chemical emergencies can happen anywhere, extending the need for GC/MS equipment beyond the lab. Person-portable GC-MS systems, like the FLIR Griffin G510, provide the ability to confirm the presence and identity of unknown threats directly on-scene, increasing the safety of first responders, the community, and the environment.