THE ARIZONA DEPARTMENT OF TRANSPORTATION HAS EMPLOYED A SYSTEM WITH 90 FLIR THERMAL CAMERAS IN PHOENIX TO DETECT WRONG-WAY DRIVERS AND REDUCE CASUALTIES.

Crashes caused by wrong-way drivers kill up to 400 people in the United States annually, on average, representing approximately one percent of the total number of traffic-related fatalities each year. Although this is a relatively small percentage, wrong-way driving crashes are often head-on collisions, and therefore tend to be more severe than other types of crashes.

“Wrong-way driver crashes are often head-on collisions, and
therefore, tend to be more severe than other types of crashes.”

Impaired driving
Research shows that wrong-way driving is mainly the result of reckless driving behavior, which includes impaired driving, distracted driving, and driving while fatigued. Most incidents involve a vehicle entering an exit ramp, often due to unclear signage or a driver’s unfamiliarity with a city. Wrong-way collisions are also more likely to occur at night.

Thermal-based wrong-way driver detection
Preventing wrong-way driving collisions is no easy task. Traffic authorities in the United States have been taking a variety of measures, with varying degrees of success, including better traffic signage and road markings. More and more traffic agencies are also using dynamic incident detection and signaling to detect wrong-way drivers right at the highway’s entry point. Thermal imaging cameras, combined with smart video analytics, are the most effective detection technology. They can also detect the presence of wrong-way vehicles at night and in adverse weather conditions, which are the times when wrong-way collisions are most likely to happen. 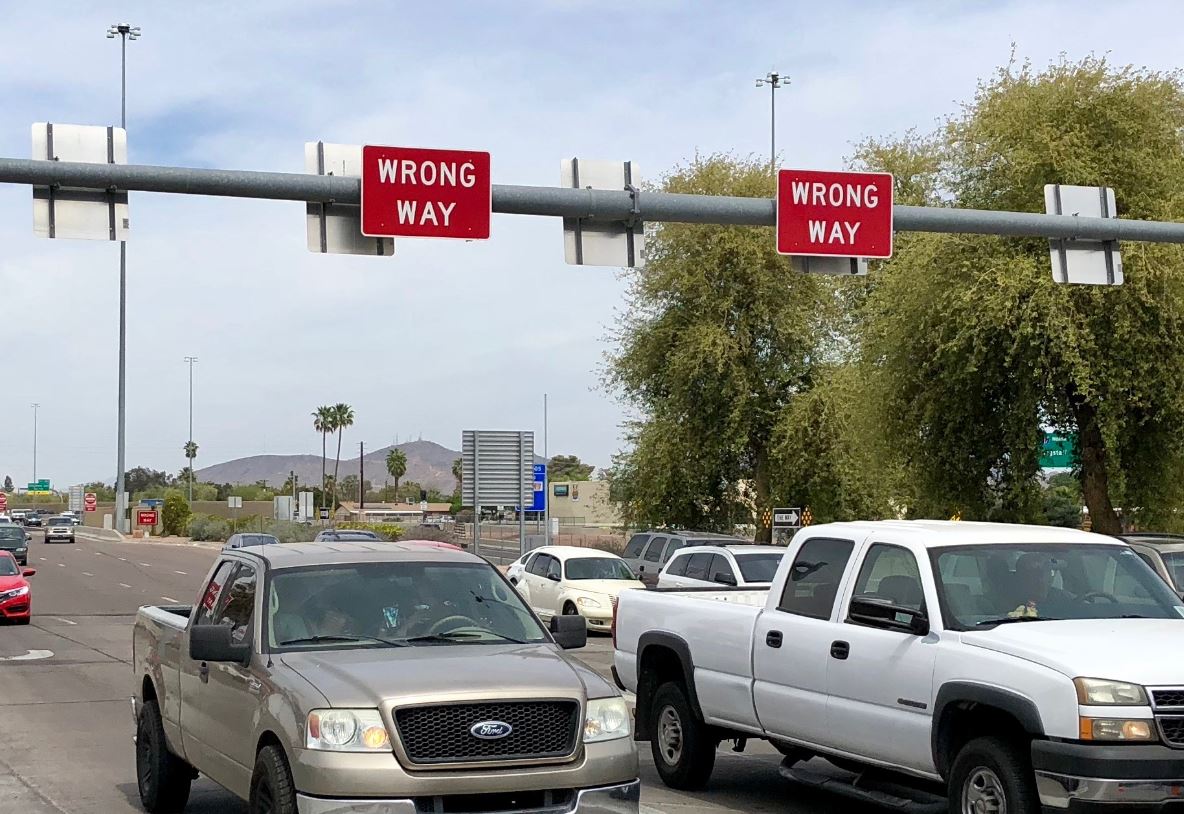 Arizona utilizes FLIR cameras
In 2017, the Arizona Department of Transportation (ADOT) installed 90 FLIR thermal cameras along a 15-mile stretch of Interstate 17 as part of an enhanced wrong-way driver detection system in north Phoenix. The FLIR cameras detect wrong-way drivers on off-ramps and on the mainline.

The ADOT system takes a three-phase approach when a wrong-way vehicle is detected: alerting wrong-way drivers so they can self-correct, warning right-way drivers, and notifying law enforcement. The system also includes a computerized decision support system and specialized background-illuminated wrong-way signs that light up in order to grab the attention of wrong-way drivers. By January 2019, ADOT reported the I-17 system had already successfully detected 45 wrong-way drivers without incident.

“ By January 2019, ADOT reported the I-17 system had
already successfully detected 45 wrong-way drivers without incident.”

Low-maintenance and affordability
An added benefit of FLIR thermal cameras is that they are maintenance-friendly and cost-effective. And above all, the technology succeeds in reducing the false alarm rate to a minimum by only detecting actual wrong-way drivers.

Thermal imaging cameras cannot prevent impaired drivers from getting behind the wheel or stop all wrong-way crashes, but they can reduce the risk of serious crashes by alerting law enforcers more quickly than waiting for 911 calls from other motorists.

"Thermal cameras can alert law enforcers more quickly
than waiting for 911 calls from other motorists.”

Traffic managers across the globe use FLIR Intelligent Transportation Systems technology to keep our roadways safe and secure. Find out how FLIR products can control signals for vehicles, keep pedestrians and cyclists safe, detect incidents on roadways; and collect valuable traffic data by downloading the FLIR Intelligent Transportations Guidebook using the form to your right.