Thermal imaging cameras are becoming increasingly popular for roadside monitoring and highway surveillance systems. But the technology can also be used for traffic monitoring and dynamic control of traffic lights in cities and urban areas. By looking at heat signatures, thermal imaging cameras can make a reliable distinction between vehicles, pedestrians and bicyclists. Pedestrian and bicyclist detection is used at both signalized and unsignalized intersections and crossings. Both types of intersections have their specific problems, most of which can be solved or mitigated with thermal imaging sensors.

More and more, traffic authorities are seeing the benefits of thermal imaging cameras and sensors for the use of traffic light control at intersections and for pedestrian detection.

A thermal imaging camera creates a crisp image based on the temperature signatures of different road users. A thermal camera does not need any street lighting whatsoever to work properly and it cannot be blinded by direct sunlight. As such, thermal imaging cameras provide uninterrupted 24-hour detection of pedestrians and bicyclists regardless of the amount of light available. 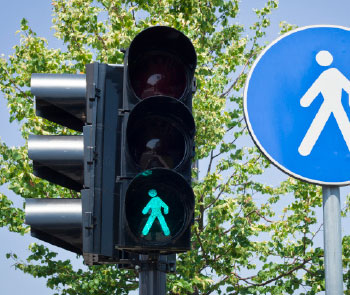 A push button typically activates a green interval and a clearance interval, which amounts to a total of 31 seconds pedestrian crossing time for a 3-lane intersection. This interval can be canceled based on presence detection, when the pedestrian decides not to wait.

At signalized intersections, push buttons usually cause significant delays in vehicle traffic and therefore interrupt the vehicle flow. 70% of pedestrians that use the push button start to cross before they get green, resulting in three times more CO2 emissions due to vehicles idling.

At signalized intersections, the green man signal allows pedestrians to cross the road. When it switches to red, a clearance time is given for pedestrians to get to the other side of the road. During the clearance time, all traffic signals are in red phase to keep vehicles waiting, preventing possible collisions. 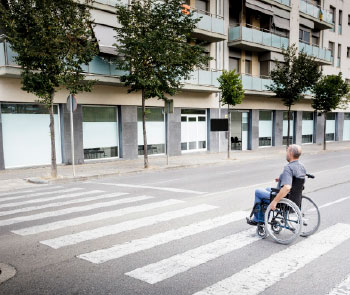 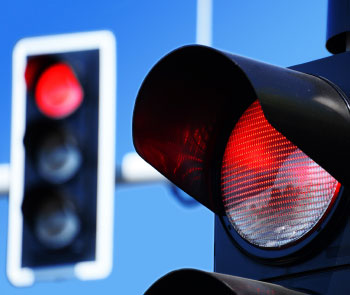 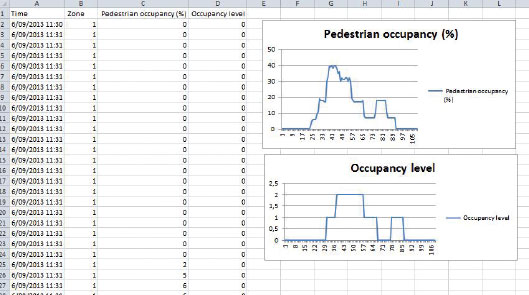 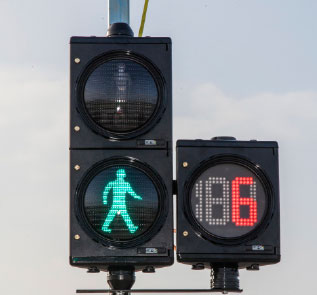 Intersections near schools, business centers, shopping malls, sport stadiums etc. are not always able to cope with the changing pedestrian traffic flows during the day, as fixed signal schemes do not match the actual situation at different times of the day. Imagine a crosswalk near a sports stadium before an important football game compared to that same crosswalk on a regular day. Clearly, those are completely different traffic situations. Pedestrian sensors can give priority to groups of people that want to cross without creating a conflict with the fixed schemes that might be better for the vehicle traffic flow when there is a single pedestrian.

Thermal imaging sensors can detect bicyclists waiting at the stop bar at an intersection. Based on bicycle presence detection, traffic signals can be adapted to give bicyclists green time five seconds ahead of vehicle traffic. This provides bicyclists with sufficient time to cross the intersection safely and gives them more visibility towards other road users.

Pedestrian crossings in urban environments are used by both pedestrians and cyclists. Push buttons are not only inefficient but are also difficult to reach for cyclists. With pedestrian detection, push buttons can be replaced and are no longer necessary.

City planners responsible for installing new pedestrian or bike facilities like crosswalks, sidewalks or bike routes rely on real data to build their case. Data on the occupancy of pedestrians or other vulnerable road users for a given traffic environment is essential for the decision whether or not it makes sense to make the investment. By logging the data generated by a FLIR pedestrian sensor, a clear view on the pedestrian traffic situation can be given.

When a vehicle has a collision with a pedestrian or cyclist, the speed of the vehicle determines the degree of injury affecting the vulnerable road user. The vehicle speed at a collision will depend on the reaction time of a driver and the ability to brake. Many factors influence this reaction time: distraction, bad weather conditions, bad visibility, alcohol intoxication, etc. Bad visibility can also be due to the fact that an object, car, truck or parked bus is blocking the view for the driver or pedestrian. When a driver actually gets to see the pedestrian, it’s probably already too late. 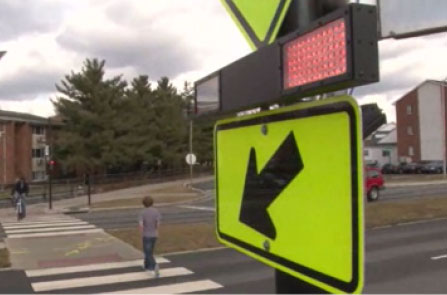 Pedestrian detection sensors can activate warning lights, such as flashing beacons or in-road LED studs dynamically and improve the safety at pedestrian and bicycle crossings in all weather conditions. 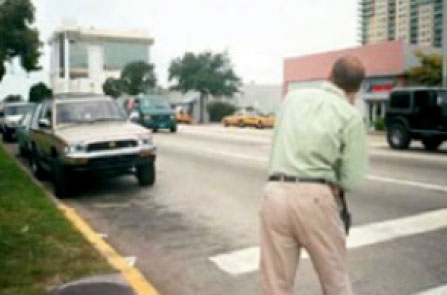 Pedestrian visibility can be blocked by an object, car, truck or parked bus.

Warning lights can help drivers and motorists recognize crossing pedestrians and bicyclists and help reduce speed in time. However, traditional, continuously flashing warning signals will have a small impact because motorists do not receive any real stimulus to change driving behavior. Research has shown that dynamic warning lights – lights that are dimmed and start to flash when activated by a pedestrian or cyclist – are far more effective in drawing the attention to the crossing. Dynamic warning lights significantly enhance the awareness of the vehicle driver, which results in faster reaction times and reduced speeds. Pedestrian and bicyclist detection sensors can activate warning lights such as flashing beacons or in-road LED studs dynamically and thus prevent collisions and reduce so-called ‘narrow escapes’ between motorists and vulnerable road users (i.e. situations whereby one or both stakeholders need to perform an additional action – brake or swerve – in order to prevent a collision.

FLIR TrafiOne is an all-round detection sensor for traffic monitoring and dynamic traffic signal control. Offered in a compact and easy-to-install package, the FLIR TrafiOne uses thermal imaging and Wi-Fi tracking technology to provide traffic engineers with high-resolution data on vehicles, bicycles and pedestrians at intersections and in urban environments.

ThermiCam is an integrated thermal camera and detector for vehicle, bike and pedestrian detection. The intelligent ThermiCam sensor can distinguish between vehicles and bicyclists, which allows traffic controllers to make more intelligent decisions and adapt green times according to the specific road user type.