Economic development and quality of life has always been a difficult marriage for city authorities and urban planners. Traffic congestion is considered to be a necessary by-product of economic growth. But at the same time, idling times and traffic jams are very costly to the economy and thus pose a serious threat to further economic growth. In an estimate made by the U.S. Environmental Protection Agency (U.S. EPA) long duration idling is said to consume over one billion gallons of diesel fuel annually, at a cost of over $5 billion. In addition, congestion creates frustration with traffic users, and it results in more emissions, more pollution and increased health risks.

Next to promoting public transportation use, carpooling and ridesharing, city authorities increasingly turn to smart technologies to make the city traffic run smoother and more efficiently. One measure that has already proven to be very efficient in many cities is the installation of traffic sensors to control the operation of traffic signals. By monitoring traffic at intersections, traffic signal schemes can be adapted according to the amount of traffic, which as a result can reduce vehicle idling times and relieve city traffic. As an example, the UK’s national Automobile Association stated that cutting queuing time by just one minute per day on three major roads leading into a city could save more CO2 than switching off 2,000 streetlights.

The use of smart city and road sensors and software systems fits into the broader idea of smart cities, a vision which aims at better managing the city’s assets, including transportation, law enforcement, power plants, hospitals, and many more, and as a result improving the quality of life in the city. By integrating smart technologies into the city infrastructure, real- time traffic data can be collected to provide a basis for smarter decisions on traffic management, parking management, urban planning, energy management and many more. 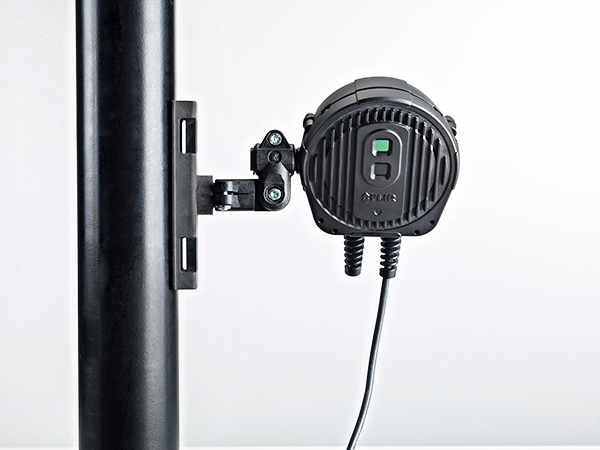 The use of traffic sensors like the FLIR TrafiOne thermal sensor fits into the broader vision of ‘Smart Cities’.

FLIR Systems has been providing smart sensors to traffic authorities for many years, in order to collect real-time data at intersections and arterial roads, which are typical traffic bottlenecks. Smart sensors from FLIR are based on visual CCTV and thermal imaging technology and can be used to measure a variety of parameters and provide valuable insight into traffic flows. FLIR video detection sensors are a highly reliable and accurate alternative to loops and other detection technologies for signalized intersection control and management. FLIR’s integrated visual sensors provide information on the presence
of vehicles approaching or waiting at an intersection, information that can be used to control the traffic lights more efficiently. Pedestrian presence detectors are able to give pedestrians the appropriate green time and visibility, so mobility and safety of both motorists and vulnerable road users is guaranteed.

Thermal imaging sensors use heat energy emitted from vehicles and bicyclists to make a distinction between both and make it possible to adapt green times according to the specific road user type (bike or other vehicle). Traffic sensors can also be used to collect a variety of relevant traffic data, like volume, average speed and occupancy.

The collection of various types of traffic data ultimately allows traffic authorities and urban planners to make more informed decisions, on a wide variety of topics.

Traffic data can be used to better manage traffic lights and to provide dedicated signal schemes according to traffic volume. Traffic authorities can use real-time data to keep traffic moving and impose variable speed limits or dynamic green waves. Small adaptations of signal times at intersections based
on historical data can already have a large impact on vehicle idling times. City authorities could for example choose to adapt signal times according the time of day, giving more green time for vehicles in one particular direction during rush hour. Real-time traffic data can be communicated on electronic
message signs or traveler apps and help the traffic user make informed decisions about his travel options. Signal schemes could also be adapted in favor of pedestrians, for example near schools or sports arenas. Thermal imaging sensors can even make a distinction between the detection of vehicles
and bicyclists, allowing traffic authorities to provide a dedicated signal scheme for bicyclists, which allows them to cross the intersection safely.

Measures to improve the quality of life in the city often coincide with the promotion of public transportation. Smart technology can further support this vision by giving public transportation vehicles more priority rights in traffic and enabling them to make movements that the general traffic s not allowed to make. This could include priority bus lanes or dedicated signal schemes for buses. Priority can also be given to reduce delays for emergency vehicles in operation. When activated, an emergency vehicle priority scheme can adapt traffic signals ahead of an emergency vehicle’s arrival to provide a green wave allowing the emergency crew to arrive at the destination in the shortest possible time while also reducing the need to cross intersections against a red light.

19% of energy use in the world is used for lighting, and 6% of greenhouse emissions in the world derive from this energy used for lighting. Light pollution is a global problem caused by inefficient, intrusive and unnecessary use of artificial light. Smart lighting is an efficient way to save energy and reduce the amount of light along our roads. By using smart occupancy sensors, public street lighting can be adapted to the movement of pedestrians, cyclists and cars. Intelligent or adaptive street lighting dims when no activity is detected, but brightens when movement is detected. This results in major energy savings.

Transportation and urban planning is a collaborative process that incorporates the input of many stakeholders including various government agencies, the public and private businesses. Historical traffic data can be an important contributor in the decision-making process about the planning of streets, bike lanes, but also of commercial activities that might have a big impact on the sustainability of the city environment.

As a fine example of smart sensor technology at work, the city of Hamburg, Germany, teamed up with FLIR Systems to roll out a proof of concept, making use of smart visual and thermal sensors and intelligent Wi-Fi tracking technology. The combined system was designed to collect high-resolution, high-quality intersection data in the city of Hamburg. The company installed visual and thermal based sensors across different intersections in the city to detect the presence of vehicles and provide data about volume. The vehicle presence sensors are supplemented with advanced Wi-Fi tracking technology. By monitoring Wi-Fi Mac addresses of Wi-Fi enabled devices such as smartphones, it is possible to determine travel & route times along road segments. The Wi-Fi signal strength information allows determining the relative proximity and has the ability to measure queue delay times at intersections.

While the vehicle presence sensors provide data from one specific point on an intersection, the Wi-Fi tracking technology provides data about what happens between different installation points. With Wi-Fi detection, vehicle movement is fully characterized as a vehicle approaches, tops and leaves an intersection. By matching MAC addresses across different intersections, travel times are calculated in real-time. The information from different sensors can be collected, combined and accessed for further traffic analysis by FLIR’s cloud-base analysis platform. Smart analytics transform the data
into useful traffic insights, critical to understand the road network performance. The user friendly dashboard provides all the tools with a simple click that can help traffic engineers run reports and start taking measures
where they are needed. 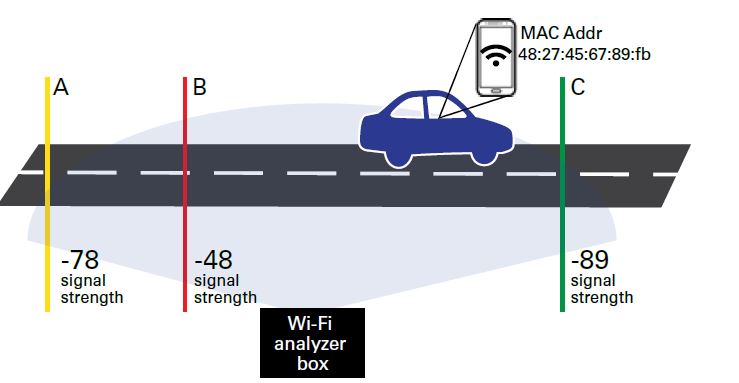 By monitoring Wi-Fi Mac addresses of Wi-Fi enabled devices such as smartphones, FLIR is able to determine travel & route times along road segments.

The information from different sensors can be collected, combined and accessed with FLIR’s cloud-base analysis platform for further traffic analysis.