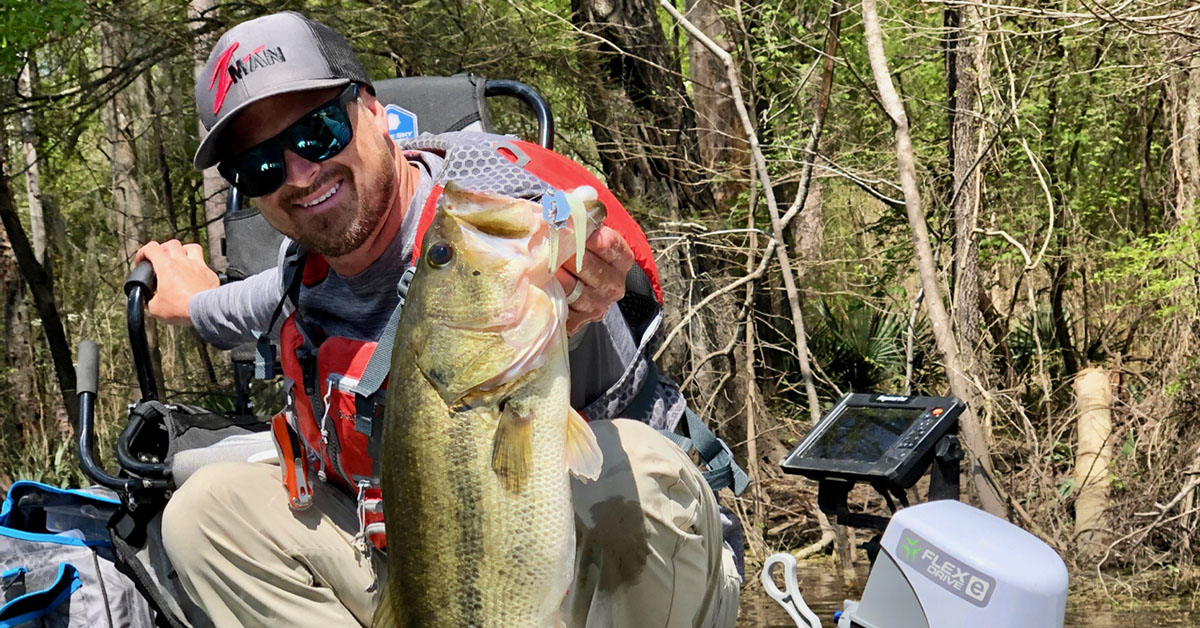 March 28-30 marked Kayak Bass Fishing’s 2019 National Championship. KBF championship contenders fished not just a single lake, but an entire system of rivers and lakes circling Shreveport-Bossier City, Louisiana. Eligible water included the Red River from the Hwy 2 bridge in the north to the mouth of Loggy Bayou on the south and five lakes within a 25-mile radius of the Event HQ, including Caddo Lake, Cypress Bayou Reservoir, Black Bayou Reservoir, Cross Lake, and Lake Bistineau.

The 461 kayak-angler participants had qualified to compete in the 2019 National Championship either through KBF-directed competition or KBF partner awards. In this elite field, competition was hot and heavy.

Pro kayak angler Drew Gregory placed second at the event, his kayak rigged with the brand new Raymarine Element sonar/GPS display, which he maintains played a large part in his successful angling.

“Element really helped in my pre-fishing, helping me identify channels and lanes that bass would be moving into toward the spawn. It was really important to find the zones of three to four feet of water. Lake Caddo is a really shallow lake—a lot of one or two foot water and grass mats—and some guys were definitely catching fish on frogs in the shallow water but my key was clean cypress trees without any grass around them that were in deeper water, with that three to four foot stuff. It seemed like the bigger bass wanted the safety of these areas where they could spawn around the cypress trees but still have some deeper water nearby. Element made it easy for me to find these depths,” says Gregory.

“I actually found fish that were still pre-spawn, so they were munching better than some of the other anglers’ fish. A lot of other anglers’ fish were already on beds and kind of thumping and knocking baits away, not really eating. And it was almost too hard to sight-fish because the water wasn’t clear enough so it made using Element’s temperature readout really important, too. I was on the north end of the lake where there was water flowing, so it was just cooler, like 62 degrees at the beginning of the day and up to 65 or 66 toward the end of the day. That really helped me target pre-spawn fish that were still biting,” Gregory continues.

The second-place angler also cited Element’s ultra-high-frequency HyperVision sonar as a difference-maker. “Element’s 1.2MHz SideVision technology helped me find stuff that I couldn’t see; that was huge. The nine-inch screen and HyperVision really helped me see fish and those key trees in incredible detail. It was awesome. Even running split screen, I could see everything crystal clear,” he adds.

Gregory says Element’s transducer is a size that makes it easy to install on kayaks. “It’s another great feature that makes this a great unit for kayak anglers,” he says. “And whether they go with the 7”, 9” or 12” Element model, they’ll get QuadCore processing speed so there are no delays or lags in sonar scroll or map updates.”

“It’s kind of funny. For me, I was fishing really shallow, but I was actually using my Element graph to locate the very specific depths that I was getting my fish. I was targeting spawning fish on cypress trees and there are a million cypress trees on Lake Caddo, but all my bites seemed to come in depths around three-to-four feet. The water was pretty dirty so you can’t look around and guess how deep you are, so my Element was key even though I was in less than five feet most of the time,” says Blanchard.

“The Raymarine Element picture is just a really quality display,” he continues. “Having three different images at once—I use a map, sonar, and SideVision or DownVision technology all at once—and you can see something on your sonar that may look like a fish then check the other technologies and realize it’s just a stick or a piece of structure and not waste your time. So, the fact that the display with HyperVision is so crisp and that multi-screen function, it really gives you the ability to decipher exactly what’s under water. I’ve seen everything from boats to trees, grass, fish obviously, etc. That’s what really jumps out to me is how crisp the picture is.”

“The mapping and GPS played a huge role. The lake is flooded with millions of cypress trees and you could get lost really quick. So, being able to mark waypoints and refer to the maps for where I was going was obviously a huge time saver in the tournament situation. It really prevented me from getting lost,” says Blanchard.

Blanchard says the tournament itself exceeded all his expectations. “When you’re competing against 461 of the best kayak anglers in the country, you just go out and try to do your best. After Day 1, I was sitting in 32nd place with a solid limit. I knew I had to do that or better on the second day for a chance at this thing, and I did it again on Day 2 and that put me in 17th place going into the final day. On the final day I had a magical day—my best day of the tournament—and I jumped from 17th to 3rd place. Each and every fish was caught on a black and blue flake Yamamoto Senko.”