Before you use your camera, we recommend that you are aware of the following resources available from the our downloads page:

Getting Started Manual for the camera—provides information on installing components and software needed to run the camera.

Technical Reference for the camera—provides information on the camera’s specifications, features and operations, as well as imaging and acquisition controls.

Firmware updates—ensure you are using the most up-to-date firmware for the camera to take advantage of improvements and fixes.

Image consistency errors refer to a range of messages sent by the driver when an image is missing packets or when the camera is otherwise unsuccessful at transmitting image data to the CPU.

How Errors are Reported

SpinView reports image consistency errors in the Log Viewer window, by default found on the bottom of the application.

FlyCap2 reports image consistency errors in the GUI Event Statistics Window as shown here. The viewer does not see images with errors, such as torn images, because FlyCapture discards torn images. Other software packages, such as NI-MAX, display torn images when packets are missing. Image consistency errors have a variety of causes, and the user may have to address more than one cause to correct the errors. This table is a summary of the most common causes of errors and their possible solutions. Additional details of possible solutions are given in later sections.

Using jumbo packets results in fewer packets per frame of image, which means there are fewer interruptions for the host and the host is less likely to drop data, resulting in image consistency errors. Some machines may encounter latency issues with image events being delayed or arriving with varying timing when RSS and Interrupt Moderation is enabled. If this is true, consider disabling RSS and Interrupt moderation, which have been observed to create timing issues in image event arrival times.

Note that if the camera is already streaming at, or close to, the maximum bandwidth available on the connection, packet resends may overwhelm the available bandwidth and cause subsequent image transmissions to be delayed.

The filter driver will resend up to GevMaximumNumberResendRequests gaps in the image, per image received. GevPacketResendTimeout provides a worst-case scenario timeout for returning an image buffer.

SpinView has packet resend turned on by default (controlled by the "Enable Resends" node): 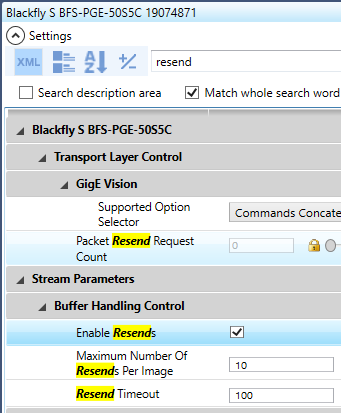 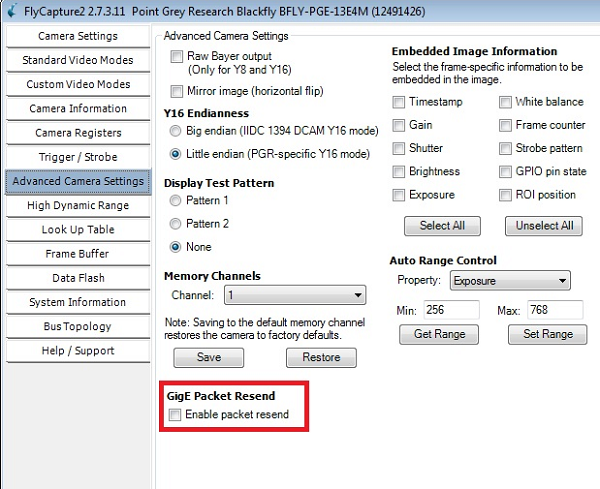 Provided below is an example graph of what it would like when CPU load spike occurs, that has maxed out kernel time utilisation.  When this occurs, the CPU will likely by unable to process one or more of the packets submitted by the network card for processing, resulting in a missed packet.

The Windows network copies the network packets from kernel mode to user mode and the user must then make another copy of the image data. Installing an image filter driver eliminates the need for a second copy because the driver copies the image data at the kernel level. This reduces the workload on the CPU and lessens the chance of image consistency errors.

To install Spinnaker's filter driver, in SpinView, right-click on the camera and select filter driver configuration. In the Filter Driver Configuration window, ensure the driver is installed and enabled. Click Refresh if making changes.

To enable the filter driver:

Packet delay controls the delay between data packets trasnmitted out of the camera.

It is generally recommend to set packet delay to as large as possible while maintaining the desired framerate.  This spreads out network load as much as possible on the system and minimizes chances of missing packets due to system load.

This is particularly important in multi-camera systems, so as to average out the load on switches and network adapters as much as possible.  Lowering the packet delay necessarily will increase the chance of creating large bursts of network traffic, which may cause data to be lost.  See "Common scenarios and how you can configure Delay/Throughput for each" below to pick the best packet delay value for common scenarios. Setting packet delay too high will cause camera to stream slowly, or shift data packets completely outside of the available transmission time.

DeviceLinkThroughputLimit reports the maximum throughput possible on the system given the current packet delay setting. The camera frame rate will be set to the largest possible value, and assumes no downtime between data transmission.  To make sure that the user configures the framerate, enable the AcquisitionFrameRateEnable node.

Therefore, packet delay is inversely related, and functionally equivalent, to changing the DeviceLinkThroughputLimit on the device. Changing one will affect the other node on the camera, and vice versa.

Note:   When programming cameras, only set one of Packet Delay or DeviceLinkThroughputLimit, as setting one automatically sets the other as well. Setting both values will void one of the two settings unless they are mathematically the same.

The relationship between these settings are:

Common scenarios and how you can configure Delay/Throughput for each:

Packet delay for a specific framerate.

In SpinView, Packet Size and Packet Delay can be found by entering "packet" in the feature tab's search bar. Furthermore, rather than directly modifying packet delay, it may be more intuitive to change the device link throughput limit, which allows you to control the maximum bytes-per-second the camera is allowed to stream at.  Reducing this value reduces the cameras max framerate, and automatically changes the packet delay as well. Set the packet size to the maximum (9 k with jumbo packets enabled) and choose your device link throughput limit that still allows the required frame rate without errors. Adjust the packet size and delay time as required to minimize errors or dropped packets.

In FlyCap2, packet size and delay can be controlled in the custom video modes tab in the camera control dialog window. 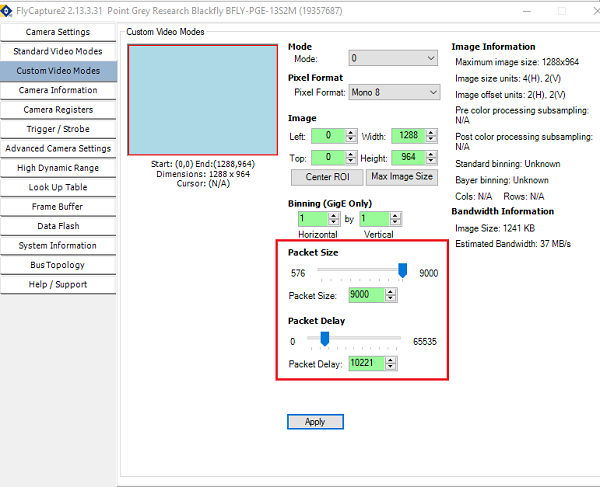 Incompatible hardware may cause too many dropped packets for packet resend to fix the error. Try a different Ethernet cable or network adapter. Check the bandwidth capabilities of the network adapter. A typical network adapter handles 1 Gb/s but some older adapters can only handle 100 Mb/s (10x slower). If the adapter can’t handle the amount of image data being transferred, the result is a large number of dropped packets.

A multi-camera set-up connected through a switch to a single network port may transfer more data than the network can process, resulting in dropped packets; again, a single gigabit connection can only handle a maximum of approximately 125MB/s, with most gige cameras being able to achieve that bandwidth, or near it, with one camera. To lower the bandwidth transferred to the network adapter, increase the packet delay/reduce the device link throughput limit, or the image resolution on one or more cameras. Make sure that you are sending less than the maximum amount of data for your network adapter (see above).

Even if the combined throughput of a multi-camera setup is less than the maximum bandwidth of your network adapter, the use of multiple network adapters may help utilize more system resources to avoid packet loss. For example, two cameras streaming at 5Gb/s connected through a switch to a single 10Gb network adapter may experience higher system load and a higher chance of dropped packets than if the same cameras are each directly connected to a distinct 10Gb network adapter. See above for maximizing packet delay to reduce possible high traffic on the switch.

A DPC is a process that defers tasks with a low priority in order to immediately process high-priority tasks. A high DPC latency indicates that that system is experiencing many delays as a result of high bandwidth demand and image packet data is not being handled at a rate fast enough to avoid dropped packets and image consistency errors.

In addition, latency issues may be caused by drivers other than network drivers, such as graphics drivers, wi-fi or usb drivers. For best performance, update all adapter drivers and ensure they are kept up-to-date, and disable any interfaces that will not be used during streaming. 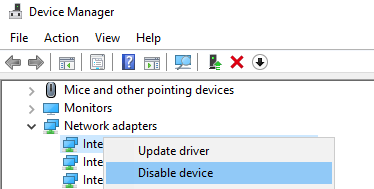 The screen capture below shows a high DPC latency while a media file is being played on YouTube. Note the spike in CPU usage and the corresponding errors. As the CPU usage stabilizes, the image consistency errors disappear, even though the media is still playing. This shows how the initial creation of DPCs affects the rate of image grabbing from the camera. As the DPCs are handled, the image grabbing rate recovers, even while the video continues to play. To reduce the latency, do not run too many tasks simultaneously. Resources diverted from the camera to other tasks reduces the amount of resources available for image capture.

Interrupt Moderation Rate sets the rate at which the controller moderates or delays the generation of interrupts, optimizing network throughput and CPU use. The Adaptive setting adjusts the interrupt rates dynamically, depending on traffic type and network usage. Choosing a different setting may improve network and system performance in certain configurations. If the moderation rate is high, the amount of interrupts will be suppressed. The less often the interrupt happens, the lower the CPU load. However, the less often the interrupt happens, the more likely the ACK respond from the host will be slow, resulting in the host responding to a request or accepting an image packet more slowly. Adjust the moderation rate based on the system, camera and data rate of your current configuration. Network adapters support configuration of Receive side scaling, which by design spreads DPC load to multiple processors instead of using a single processor. The powershell commands "Get-NetAdapterRSS, Set-NetAdapterRSS" can be used to configure specific load distributions. On some systems, RSS settings do not seem to have noticible impact until the primary processor load is maxed, at which point additional load is scheduled to other processors. This may not be enough to prevent packet drops upon the primary core reaching 100% kernel time utilization.