In order to help overcome this problem, techniques have been developed that involve capturing several images in rapid succession with varying exposure settings. This series of images can then be combined into a single image called a radiance map. Such images are useful in a number of computer graphics applications.

Previously, it could be difficult to capture high dynamic range spherical image data because of the time required to capture images in all directions at multiple exposures.

There are two ways to capture HDR images using the Ladybug SDK:

The ladybugCaptureHDRImage sample program is useful when you only need to capture a single image with the four HDR exposure settings. When executed, this program reads a series of shutter and gain settings from the camera configuration file, and takes four panoramic images using these values. The images can then be processed into a single image with external software such as Adobe Photoshop, PFStools or Qtpfsgui.

If you want to use HDR functionality when taking successive shots, such as for a video, you can use the LadybugCapPro demo program. In the Camera Control Dialog, open the Advanced Features window. When Enable HDR is checked, you can specify four gain and four shutter settings, and use the Main Window to see how the images look.

Viewing successive images distinctly is easiest when the frame rate is temporarily lowered. The frame rate can be adjusted in the General Settings window of the Camera Control Dialog. When the HDR settings meet your requirements, you can start recording a stream file.

Note: Record your final HDR settings. These will be needed when configuring external software to combine each set of four images.

You can then use the Ladybug SDK to post-process the stream file to create panoramic images or 6 raw images for each frame. Finally, use external software to combine each set of four successive frames created with HDR.

The tone mapping functionality of Qtpfsgui was used to produce the following image out of the four images above as input. Results may vary depending on tone mapping operator and parameters. 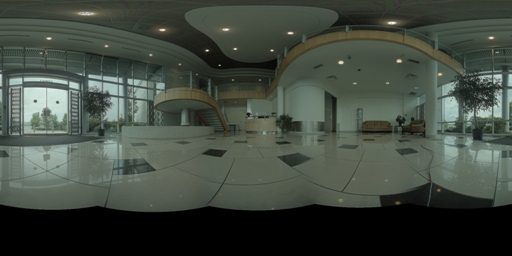