The physical layer (PHY) integrated circuit (IC) used on our IEEE-1394 cameras is a sensitive electronic component that can be damaged in a number of ways. We have identified the following reasons for a camera's PHY to be damaged:

A late VG event occurs when the data (TPx) and power (VP)  connections engage before the ground (VG) connection of the cable. This can result in damage to the PHY chip, especially in situations involving higher voltages or faulty/worn connectors and cables. For more information, see the following application note from Texas Instruments: Instruments

The figure and table below show the relevant connector pins on a 1394b camera:

Users should take note of the type of environment they are working in and whether proper preventative measures are taken to avoid Electro Static Discharge.  ESD prevention generally starts in the manufacturing phase where anti-static ankle/wrist straps, floor/desk mats, and properly grounded tools are used.  A search on Google for "ESD prevention" may elicit some helpful ideas for users looking for more information.

A common misconception is that ESD can be overlooked if a camera is encased in a metal enclosure (ie: CS-Box).  Our camera cases are designed to route any electro static discharge away from camera components but it is recommended that ESD precautions be taken whenever handling electronic devices in general.

A component such as the built-in 1394 firewire connector is another possible route for ESD to damage a camera.  If the cameras are handled by hand on a general basis, it is best to ensure the user is properly grounded before touching the device.  In cases where the camera may be handled out in the field, a user can discharge any static electricity by touching a metal object that is properly grounded to the floor (ie: table leg, lamp post, etc.).

Another common mechanism that can require the physical layer to be replaced comes as a result of the Firewire cable being plugged in backwards.  This can happen when too much force is applied or the cable interface is worn.  The result is that current is forced down the signal lines causing damage to the physical layer chip. 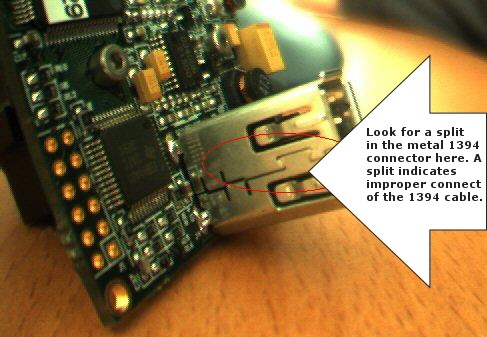