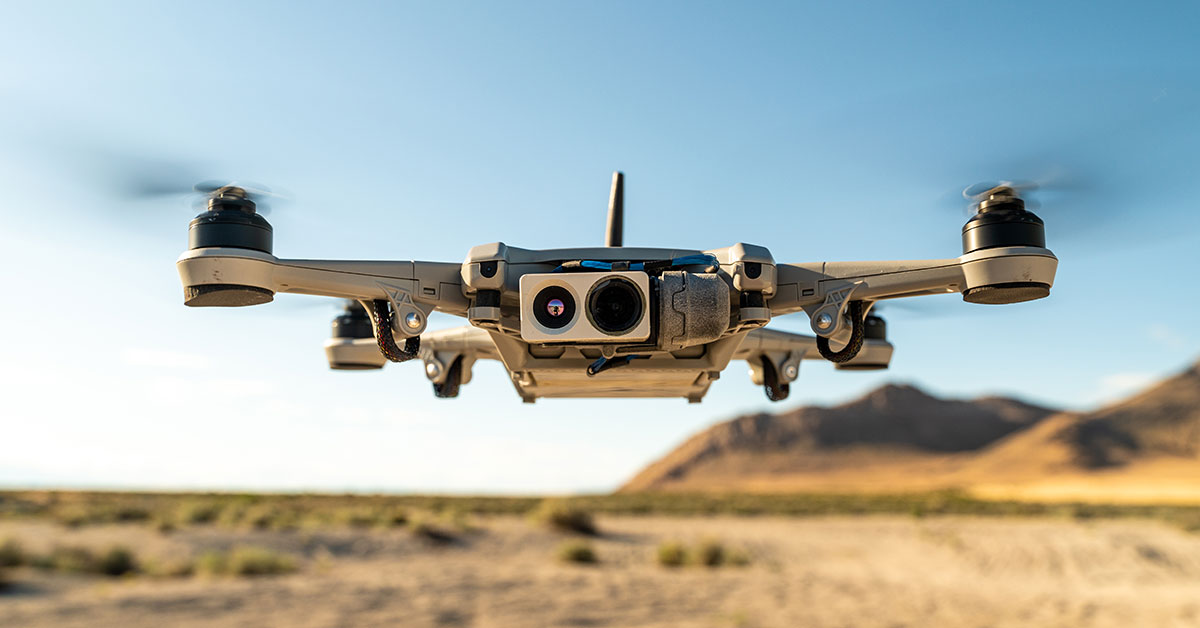 Two innovative companies have integrated the new FLIR Hadron into sUAS platforms being launched this summer. The Hadron is a compact, low power form factor that includes both a visual and thermal camera and is designed to enable lightweight and dynamic aircraft. Teal Drones and Vantage Robotics took advantage of the Hadron’s state-of-the-art capabilities to create sUAS platforms at the leading edge of the industry. 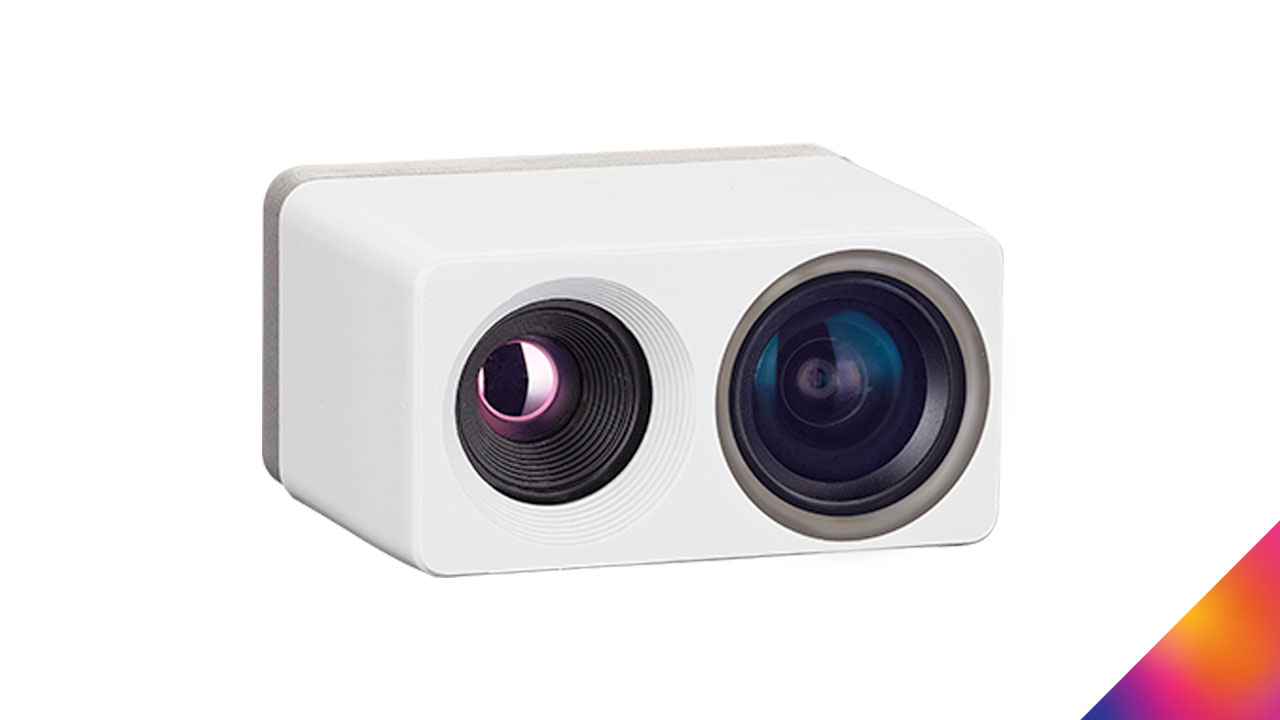 The Golden Eagle from Teal Drones

Teal was started about five years ago by CEO George Matus, who had a vision of enabling unmanned systems to be more than just single use-case devices. Early in 2019, Teal was awarded a prototype OTA contract from the United States Army for its short-range reconnaissance program of record. Through that OTA, Teal has developed its next-generation dual-use sUAS for applications between enterprise and defense markets. 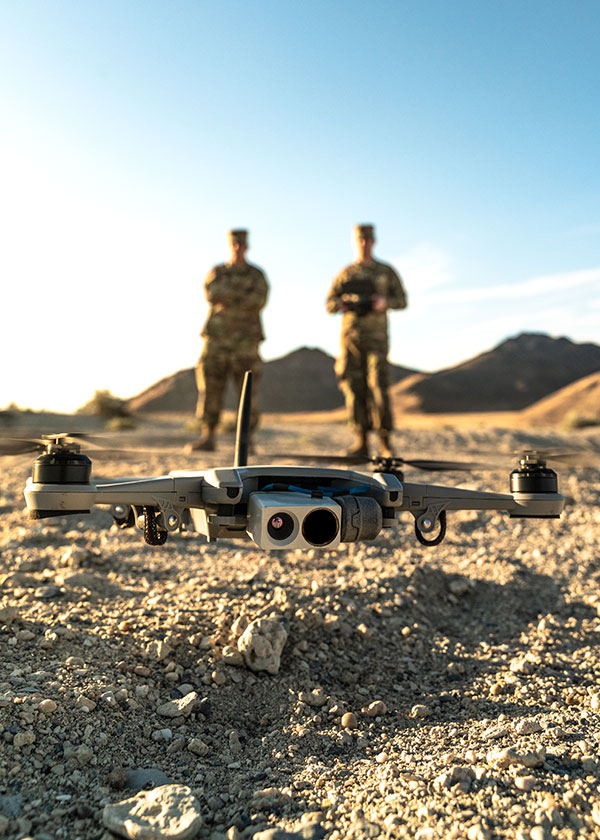 Originally designed as an ISR (Intelligence, Surveillance, and Reconnaissance) solution, the Golden Eagle has been made to the army’s exacting performance specifications. “Most importantly,” says Matus, “its focus is around the FLIR Hadron as its core payload, providing really high-quality EO and IR imaging in a really small form-factor.”

Vantage Robotics has been developing micro-gimbals over the last seven years and working in collaboration with engineers at FLIR to develop the stabilization technology for the Hadron. Vantage was the first drone company to get a broad waiver for commercial operations over people, allowing them to work with customers like CNN to collect footage of populated areas.

When they became aware of the need of the US government to have a trusted UAS, they designed the Vesper platform for ISR and situational awareness applications. In addition to the US government and worldwide governments, they see applications for first responders, wildlife management, and commercial inspections. 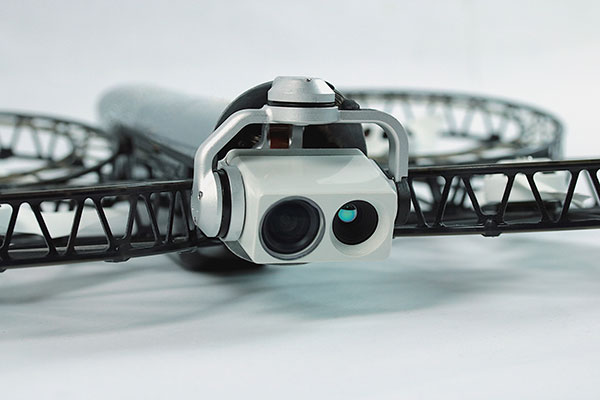 A priority for both companies was making their platform as light as possible, allowing the drone to fly farther and for longer. “Every 7.5 grams we can shave off lets us fly for an additional minute,” explains Tobin Fisher, CEO at Vantage. “So we’re tracking every tenth of a gram, and are always excited to see packages that let us reduce that.” The Vesper weighs only 650 grams, but has more flight and sensor capabilities than most similar products on the market. It can fly over 45 kilometers (about an hour of flight time) and do so nearly silently. “That’s something that really hasn’t been seen before,” says Fisher.

Likewise, the Golden Eagle only weights about 2 pounds, but is just as capable as much larger platforms, making it more affordable and scalable for customers. The tiny, lightweight drone can be easily carried by warfighters without adding much weight to their load, can fit into tight places, and is generally more covert. Teal also has a custom propulsion system designed to be much quieter than other aircraft, a huge advantage to ISR related use-cases. “It’s essentially just a better version of Teal, and where we always wanted to take drones,” Matus says.

Integrating the Hadron was a critical component to keeping the weight off. “The Hadron is far away the lightest and smallest combined EO/IR sensor that has ever been commercially available,” says Fisher. “For an aircraft where you’re trying to push the limit on flight performance, every gram matters. The ability to get these sensor capabilities in a package this small makes an enormous difference.”

Teal and Vantage found the Hadron easy to integrate into their designs. “It was a really great experience working with FLIR for the integration,” says Matus. We were able to partner early on and work hand-in-hand with the Hadron project team through the integration.”

This was a contrast from the design of Teal’s first flagship consumer product, the Teal One, which had a custom camera that cost hundreds of thousands of dollars to implement. “Being able to use the Hadron, we didn’t have that big resource drain on the company,” says Matus. “We were able to lean on FLIR and their expertise for doing what they do best.” 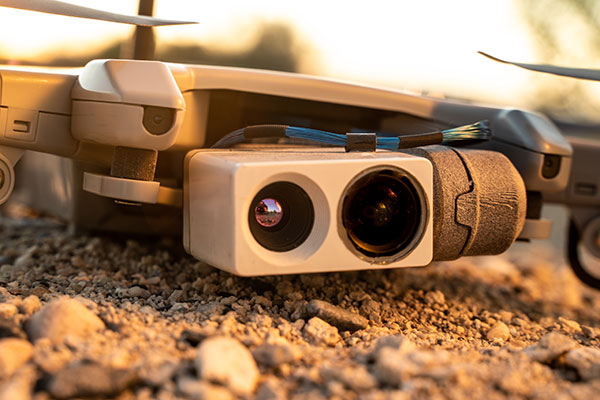 Vantage also saved internal resources by integrating the Hadron, according to Fisher. “The Hadron reduced engineering costs and time,” he says. “Having it prepackaged in a module like this makes it a lot easier to work with and integrate into our gimbal payload.”

Both were impressed with the quality of the product and ease of use.

“The software package for ingesting the thermal and the EO was extremely easy to use, the product was robustly designed and extremely easy to integrate,” says Fisher. “Everything worked as expected – that made integration very fast and painless.”

Matus has a similar report. “The Hadron product itself we were super impressed with. Really high quality, really low weight and size… It allowed rapid integration, and ultimately deployment of the prototypes for the army.”

The American Drone Industry is Making a Comeback

An emerging theme in the sUAS world is that the American drone industry is on the rise. “We’ve been hammered over the past several years,” says Matus, “but we’re making a comeback.” One factor that Teal sees boosting the American drone industry is the US Army’s support of US-based drone companies and requirement of DOD compliant drones. “We’re fortunate that Teal can be on the forefront of that.”

Vantage is looking forward to seeing the American drone industry become more competitive on a global scale. To achieve this, Fisher advocates more collaboration within the industry. “One of the things that I firmly believe,” he says, “is that for the American drone industry to be competitive, we have figure out how to reduce duplication of effort and figure out how to work together in a more effective, collaborative way.

“To try to walk the talk on that, we’ve decided to make systems from Vesper commercially available to other system integrators within the drone industry in order to bring their products to market faster. That includes the stabilized version of the Hadron.” This stabilization technology is key to enabling smaller, lighter gimbals.

“There’s a phenomenal wealth of talent, of ideas, of innovation,” Fisher continues. “There’s amazing work going on by so many groups in the American drone industry. It’s so exciting to see the breadth of innovation that’s happening at every level, from software, to hardware, to sensors, to airframes.”

We hope to continue seeing innovative sUAS manufacturers like Vantage and Teal using FLIR solutions like the Hadron to enable better, more capable drones for use in the military, commercial industry, and beyond.