Automatic Number Plate Recognition (ANPR) systems have been widely deployed to enable law enforcement agencies to control and manage traffic on highways. The systems are capable of reading the license plates of vehicles moving at high speeds during day and night, and even in heavy traffic conditions or where lighting is poor.

Seeking to improve upon the performance of earlier designs, Madrid, Spain-based Lector Vision has recently introduced a new ANPR system dubbed the Traffic Eye. The system combines the best of off-the shelf hardware with custom hardware designed and developed by Lector Vision, and the company's own OCR Software Engine, resulting in a highly versatile system that can be rapidly tailored to identify license plates in any country in the world.

The Traffic Eye system itself illuminates traffic scenes using pulsed infrared light whilst capturing monochrome images of vehicles as well as scenic overviews using two separate cameras. Software running on an advanced processor in the system then detects where the vehicle plates lie in the monochrome images, and identifies the individual characters on the plates using an optical character recognition technique that employs an artificial neural network. Both the license plate number and the color overview of the scene are then correlated before being transmitted to a control center in real time. 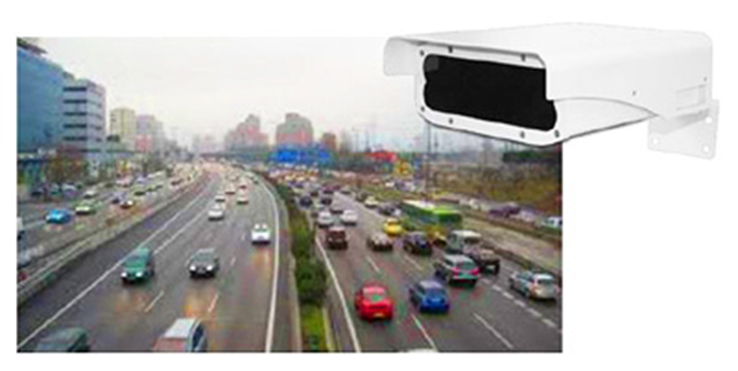 According to Gonzalo Garcia Palacios, the Manager of Research and Development at Lector Vision, the cameras play an important role in the number plate recognition process, since the overall performance of the system is highly dependent on the quality of the images that are captured.

"In the past, specialized cameras were required for ANPR applications, but thanks to the performance of FLIR's camera range, the new system can make use of off-the-shelf products," he said.

The first of the cameras in the Traffic Eye system - a Blackfly 1920 pixel x 1200 pixel GigE monochrome camera with a Sony Pregius IMX249 CMOS global shutter sensor and an IR filter -- captures images that are analyzed by the system software to determine the license plate of the vehicles. The second, a Blackfly 1920 pixel x 1200 pixel GigE color camera equipped with a Sony IMX249 CMOS sensor, captures an overview of the scene. Different cameras equipped with different CMOS sensors can be easily changed to better fit into different applications, e.g. monolane or multilane (up to 3 lanes at the same time) ANPR devices, Red Light Enforcement , and Average Speed enforcement.

While GigE cameras have been extensively used in the Traffic Eye system since its introduction in 2013, the modular nature of the processor and control hardware boards used in the system means that the company is not restricted to one camera interface. According to Palacios, when systems demand higher resolution, it is relatively straightforward to choose a camera with the appropriate sensor and then decide whether a GigE interface or a USB3 interface with a higher bandwidth would be more suitable.

Due to the fact that the intensity of sunlight varies according to its wavelength in the IR spectrum, the wavelength of light chosen to illuminate the traffic scene was an important design consideration.

In the past, many ANPR systems have illuminated license plates using infrared light in the 880nm wavelength range. However, at 940nm, the intensity of sunlight is about 60 per cent of its intensity at 880nm. Hence, Lector Vision chose to reduce the levels of sunlight interference by illuminating traffic scenes with a custom-built array of pulsed LEDs that operate at the higher wavelength.

"The tradeoff when using higher wavelength LEDs is that the sensitivity of the sensor in the camera to light at 940nm is somewhat reduced. To compensate for this, a control system in the Traffic Eye pulses the IR LEDs for microsecond intervals at a time, producing an intense strobed IR light that (once reflected from the license plates) can be easily detected by the monochrome camera. As the scene is illuminated by the pulsed IR light, the controller triggers both cameras simultaneously to enable them to capture both a monochrome and a color image of the traffic scene," said Palacios.

Both images are then transferred over the GigE interface to an embedded quad-core processor in the Traffic Eye system. Here, the monochrome image is analyzed by custom software running on the processor to determine the characters on the license plates in the image. To do so, the software first searches for rectangular regions of interest in the image where a license plate is likely to be present. An edge detection operation is then performed on the region of interest to find the boundaries of the characters on the license plate by detecting discontinuities in brightness in the images.

Having determined the location of the characters on the plates in the images, the system then identifies the individual characters themselves. To do so, Lector Vision chose to deploy a software-based artificial neural network that was first trained to identify characters on license plates by being presented with many thousands of separate examples from a single country. The neural network then uses the examples to automatically infer rules from which it can identify new unknown characters from the images captured by the monochrome camera once the Traffic Eye system is deployed in the field.

"Once the license plate has been identified, the license plate number and the image of the traffic scene captured by the color camera (as well as an optional GPS time stamp) can be sent to a control center over cable, optical fiber, GPRS, or 3G, depending on the nature of the application. In doing so, users such as highways agencies who monitor traffic flow and enforce red light violations can view the two images to identify the vehicle in question through its license plate and examine an image of the car and its occupants at the precise location where the license plate of the vehicle was captured," said Palacios.

According to Palacios, over 500 Traffic Eye systems have been installed since the system was launched in 2013 where they have proved capable of reading number plates of vehicles travelling at speeds that exceed 200 km/h. Apart from Spain, systems have been deployed in Andorra, Columbia, Chile, Poland, Slovakia, Perú , Algeria, and Mexico. In addition, the company has also sold more than 700 access control devices since 2003, and the OCR recognition software as a stand alone software product to other interested parties.

But the company is not resting on its laurels. This year, Lector Vision plans to add more features to the system, training it to identify license plates from numerous other countries where traffic enforcement is becoming a significant issue. In addition, the system will be upgraded so that it can detect traffic from more than three lanes on a highway at one time. Lastly, the system will be improved so that it will not only read license plates, but also detect many other types of events on the road, such as traffic moving in the wrong direction down a highway and car accidents.