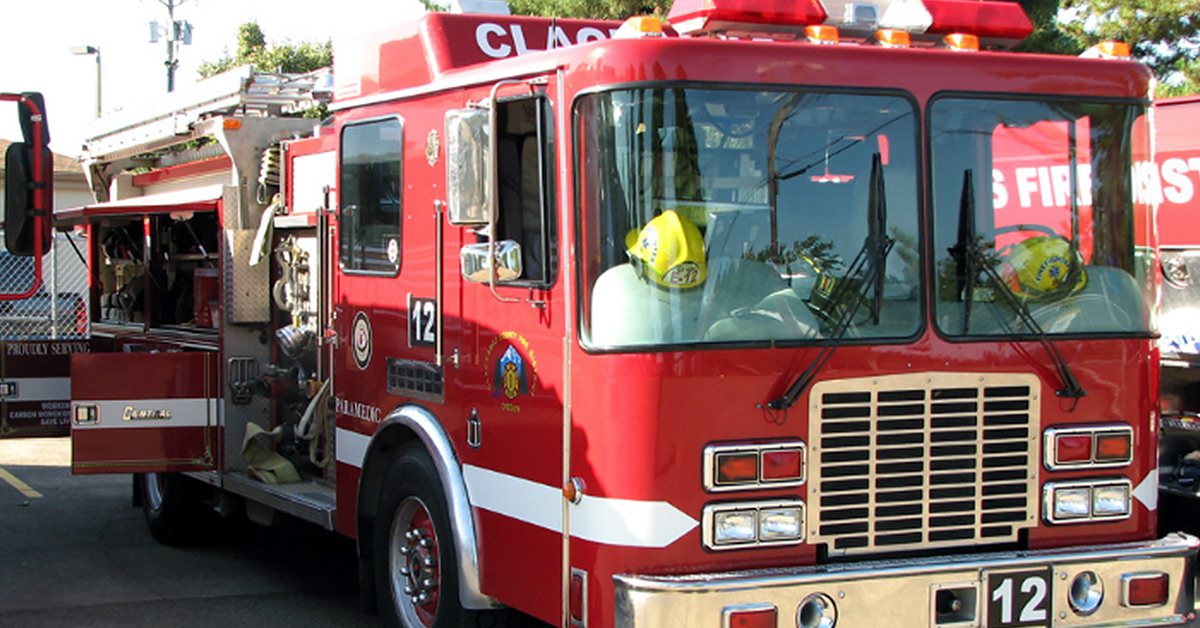 Clackamas Fire District #1 provides fire, rescue, and emergency medical services to five cities in the state of Oregon, USA. With 17 fire stations strategically located throughout Clackamas County and a workforce of more than 200 employees & 100 volunteers, it’s the second largest fire protection district in the state, serving over 179,000 citizens in an area covering nearly 200 square miles.
Like many fire departments In the USA, Clackamas Fire has depended on thermal imaging cameras (TICs) for well over a dozen years as a critical tool in helping protect lives and save property.

“The technology’s really changed since the early days,” says Captain Jason Ellison while between calls at the historic 1923 John Adams Fire Hall in Oregon City. “Thermal imaging cameras were very large, cumbersome units when we first started using them, and very expensive. In fact, we were only able to afford a couple of cameras for the entire district back then. But with the lower cost models that are available these days, now we have multiple cameras per rig and use them pretty much on a daily basis throughout the district.”

“Thermal imagers have allowed us to see in situations where it’s nearly impossible to with the naked eye. Obviously inside a fire environment it’s incredibly smoky and dark, and we don’t know the layout of the building. TICs show us the way through so we can move swiftly, look for the seat of the fire, look for victims; basically they help provide a very effective roadmap.”

In a technical nutshell, thermal cameras create images from heat instead of light by detecting temperature differences in a scene and transforming those values into a crisp thermal video image on the camera’s LCD. On certain models, such as the FLIR K40 and K50, still frames can also be captured and stored to internal memory for later review and down¬loading for documentation and training.

Seeing through smoke and in total darkness

“With the thermal imager, I can tell as I move down the hallway where bedrooms are, easily make out the location of beds, closets, windows, and see where others are around me.” Ellison adds, “Windows, by the way, are a secondary egress for us so knowing where they are is crucial to our safety.”

Ellison explains that firefighters manning the nozzle have their hands full and typically aren’t the ones carrying a TIC. “There’s thick black smoke, ventilation hasn’t kicked in yet, and it’s very hard for them to even see their hands in front of their face. But a company officer close behind with a thermal imager can be right there to hold the TIC in front of that firefighter so he can see the layout of the structure, press on, and direct the nozzle pattern where it needs to go.”

That, Ellison says, really speeds up the effort. “In the old days, we’d have one hand feeling the way along a wall and another guy holding onto the leg of the firefighter in front of him. Try finding your way in your house with your eyes closed. That’s what it was like. It really ate up precious time.”

“With this (TIC) technology, we’re able to get to the heart of the fire and knock it out much quicker and more safely. Even when the fire’s essentially out, I’m still using the camera to look (through remaining smoke) for hotspots.

Tracking down trapped, stranded, and missing victims is another way TICs come to Clackamas Fire’s aid. “In any fire situation,” he says, “there’s always a possibility someone’s inside. So a thermal imager is very effective at helping us make sure everyone got out safely and the home gets the ‘all clear’. We also use them in our technical and water rescue efforts. For instance, we can search for people who may be stuck on a remote shore in the dark after falling in the river. Sometimes at night we have to deal with a car accident where someone got ejected from the vehicle and we need to locate the victim.

“The cameras we originally started out with seemed like the size of computers…very bulky to carry. The new ones like the FLIR K50 are very light and much more compact. And that’s important when you’re already packing 50-plus pounds of gear. A smaller TIC on a lanyard like the FLIR K50 makes it a lot more practical to clip on your turnouts or self–contained breathing apparatus (SCBA) and be hands-free until you need the device.For me, it’s very tactical to use without having to slip my hand through a handle…much easier to just grab, go, and then let go of.”

He also likes the Search and Rescue (SAR) mode that narrows the temperature detection span more in line with body temperatures to alert him where victims are faster, especially in hotter environments. On the other hand, when he’s working engine company and fire attack, he usually leaves it in “fire mode”, which has a 300 to 1200 degree F range. “That gives me a really good color alarm to show me where the super-heated gasses are and where there’s fire around us.”

The bigger, brighter LCDs of today’s thermal imagers also make using thermal imagers more popular. “Having a nice 4” screen that the FLIR K50 has, makes it a lot easier to decipher what I’m looking at to guide my crew members to safety or to their objective.”

More affordable pricing has also made a huge impact. According to Ellison, “We’re looking for tools that can help keep us safe that are also the most cost-effective. FLIR’s affordability will allow us and other departments to put more cameras on the rigs to help us do our job better and keep our guys safe.”

To sum it up, Ellison says it’s a tool that, when used correctly, allows firefighters to move swiftly and safely and get the job done right. It’s technology that would be very difficult to live without.