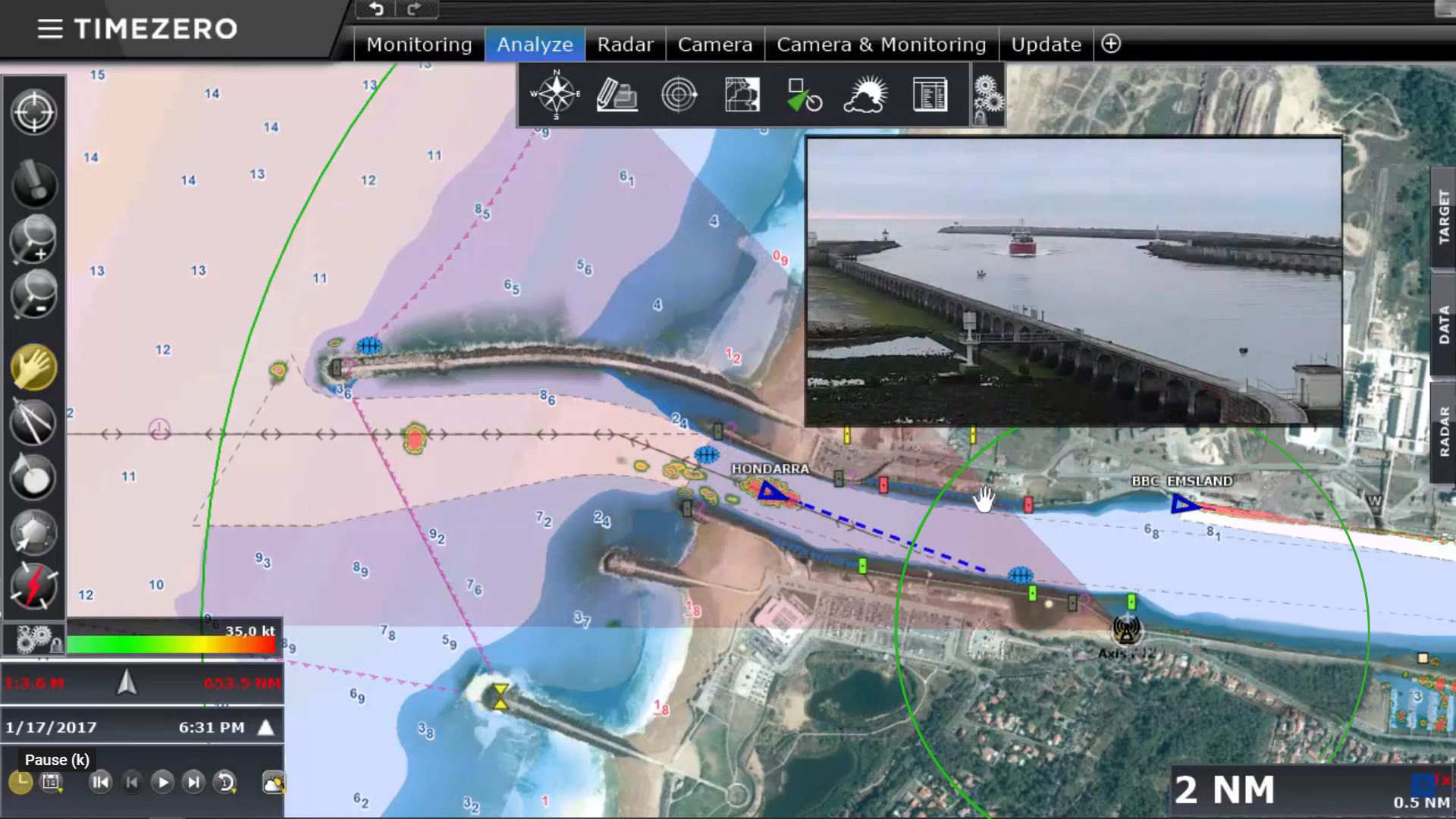 The FLIR M364C thermal and low light camera connects to TIMEZERO navigation software and a Furuno display allowing visual imaging of a vessel’s surroundings presented directly as a Chart overlay.

Marine navigation software specialist TIMEZEROTM has equipped their new Barcelona based test boat with their new test boat with state-of-the-art electronics. The Spanish-built Starfisher 830 OBS, powered by an 8.3 metre outboard motor, is certainly well-specified for its length.  As well as the FLIR M364C thermal and low light camera the boat includes other state-of-the-art kit such as a high performance multibeam fishfinder and FurunoTM displays. Indeed, TIMEZERO’s Sales and Marketing Director Frédéric Algalarrondo confides that the complete electronics equipment package aboard the boat, represents nearly half of its total value.

While this test bed is a small fishing boat, chosen because the fishing industry represents a significant market share for TIMEZERO, the equipment package here would be perfectly at home aboard a coastguard search and rescue cutter, a super/megayacht, or a much larger commercial fishing vessel.

The addition of the FLIR M364C stabilised thermal imaging camera’s input augments the already impressive situational awareness available in the TIMEZERO software. It means that highly intuitive and rapidly understood information on the depth, tracked objects, route, waypoints, track, weather routing, and a number of other mission critical variables can be seen and understood at a glance at the Furuno multifunction display (MFD) screen at the helm. TIMEZERO brings a number of AI augmented functionalities to the helm, such as customised, boat specific polars for sailing vessels.  It also allows the ability to learn depths and create a detailed, real-time updated underwater 3D map which is popular with fishing operators, called Personal Bathymetry Generator (PBG).

The information provided by radar, AIS and a number of other sensors is overlaid onto the camera view, so, for example, an unknown vessel at night that has been set as an ARPA tracked target on the vessel’s radar will show up on the MFD screen’s camera view clearly marked and tracked with a clear pointer showing its current speed and heading. The same vessel, if identified by AIS will provide more information such as the vessel name, type and callsign. In both instances the camera is able to pan and track the target accordingly. In the TIMEZERO chart view the direction in which the camera is ‘looking’ at any time is shown as a shaded cone so there is no chance of the skipper losing track of where the camera is directed at any time, or when returning to the MFD after performing other tasks.

Because the FLIR thermal imaging camera also packs a high-resolution daylight camera with a 30x optical zoom, this seamless level of integration is carried across whether it’s full daylight, dusk or full darkness, and can provide confidence-inspiring visual confirmation of objects of interest, such as vessels, dangerous flotsam, shore features, a man overboard or navaids, at a much earlier stage in the skipper’s decision-making process. The M364C uses FLIR’s new Colour Thermal Vision (CTV) technology to integrate the views from the daylight and thermal cameras displaying the two views side by side on the vessel’s MFD.

If the camera is not following a selected target it can be panned and adjusted more manually at the helm, either using simple arrow keys in the TIMEZERO software and on the Furuno MFD. On a moving vessel at sea however not everyone likes a touchscreen. Frédéric prefers controlling the camera with the FLIR JCU1 joystick control, mounted next to the MFD.

The integration of the FLIR M364C with the TIMEZERO software running on the boat’s Furuno MFD could not have been easier. It’s true plug and play, taking about three minutes to select the FLIR product from a ‘Connect a camera’ dropdown in the TIMEZERO setup menu and input the camera’s IP address. The camera connects straight into the Furuno network, and the FLIR camera’s dropdown menu covers a range of other FLIR cameras including legacy M-Series (requires AXIS Converter), FLIR M200 series (232 only), FLIR M-300, FLIR M400 Series or FLIR M500 Series.

“We believe that the way FLIR’s thermal imaging cameras integrate with TIMEZERO and FURUNO is a game changer,” says Frédéric Algalarrondo. “This FLIR M364C integration onboard our test boat is more than an additional sensor to plug into our software. The data that the camera outputs becomes central to the safety of the boat at any times of navigational doubt and the integration is well designed so even when the skipper has been away from the helm it is easy for them to return and understand very quickly from the MFD screen what has changed and what’s important.”