A few days before Christmas in 2018, deputies from the Harris County Sheriff’s Office outside Houston got a call about a weapons disturbance. A person believed to be armed was barricaded in a residence.

As with many of the call-outs Harris County deputies deal with every day, it was another dangerous situation. Lots of unknowns and uncertain outcomes.

Time to bring in the robot.

We’ll let the Harris County deputy who operates that office’s unmanned ground vehicles (UGVs) explain how events unfolded that day. And how the five-pound, throwable FLIR FirstLook® robot kept him and other officers out of harm’s way …

“We have several different robots. We use the FirstLook quite a bit and find it very useful. We probably use it four out of five times to go into a structure and get images before we start probing around. The FirstLook allows us to identify threats before exposing an officer, deputy or canine team to a dangerous situation. It’s a visual aid.

When we arrived on the scene that day, I drove the FirstLook around the main floor of the house, trying to locate the subject. We had reason to believe he was armed, so we sent in the robot first. When we didn’t find him, I navigated it back outside.

Other deputies then breached a second story window and threw the robot up through it [FirstLooks are built to withstand 16-ft. drops onto concrete]. Again, I drove it around to try and locate the subject. All of a sudden, he came out from one of the rooms bearing a shotgun. I started to say, ‘Hey, we got the guy!' when seconds later he shot the FirstLook.

“FirstLook was vital that day … If more [law enforcement] agencies got used to operating with a robot, I think they would find it very beneficial, especially in terms of officer safety.”

Usually, I’m able to get the robot away quickly from the subject. But I could feel it was struggling after sustaining some damage to its track. The subject was able to run over and grab the FirstLook. He picked it up and threw it downstairs at the front door.

Even after he did that, I was still able to maneuver FirstLook back outside to where myself and other deputies were stationed behind our vehicles. We confirmed the robot had been hit with birdshot.

But because the subject came out to confront the robot, we were able to identify the room he was hiding in. It allowed us to target that specific area of the house, and we deployed a chemical agent to create what we call an ‘area of denial.’ Moments later, he came outside and surrendered.”

We commend the deputies of Harris County for their actions that day. Their skills, training, and calm under pressure likely prevented this incident from becoming tragic. 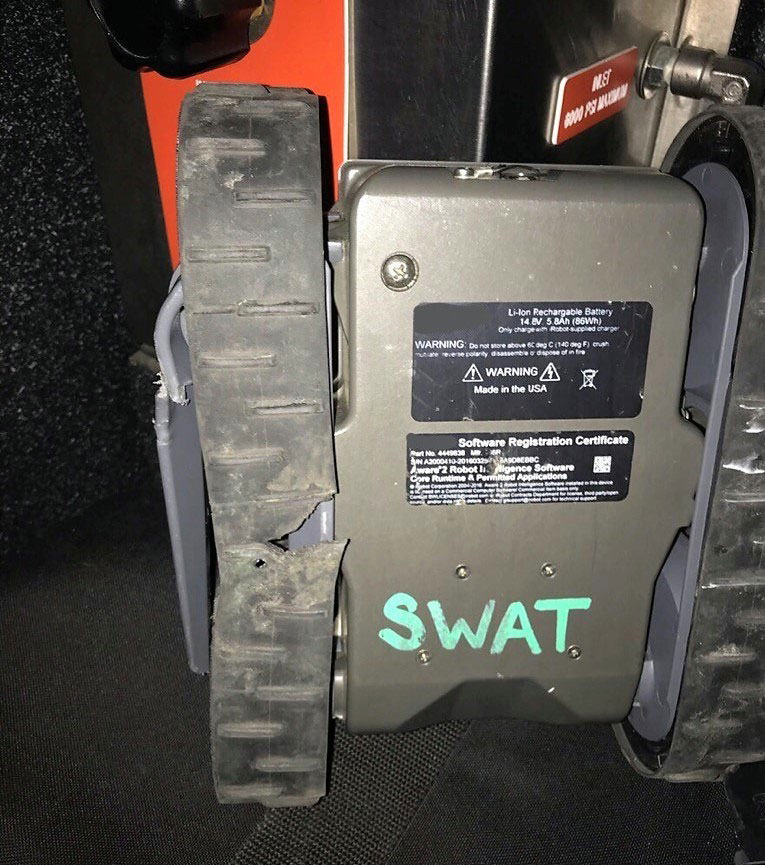 This FirstLook unit sustained damage to its flipper and track caused by a shotgun blast when it was used to investigate a barricaded suspect outside Houston.

“Tactical robots like the FirstLook put eyes and ears into a building without exposing the operator to danger,” says Kamila Blain, Law Enforcement Sales Manager at FLIR Unmanned Ground Systems. “At just five pounds and highly compact, operators can carry FirstLook in a backpack and deploy it when necessary.

“FirstLook and its bigger brother, the PackBot®, are the two preferred robots for the public safety market. They’ve been used in hundreds of missions – from searching for suspects to inspecting cars to rendering suspicious objects safe,” Kamila explains.

For those who put their life on the line every time they wear the uniform, having a five-pound partner can mean a whole lot.

“The FirstLook was vital that day,” adds Harris County’s deputy. “If more [law enforcement] agencies got used to operating with a robot, I think they would find it very beneficial, especially in terms of officer safety.”