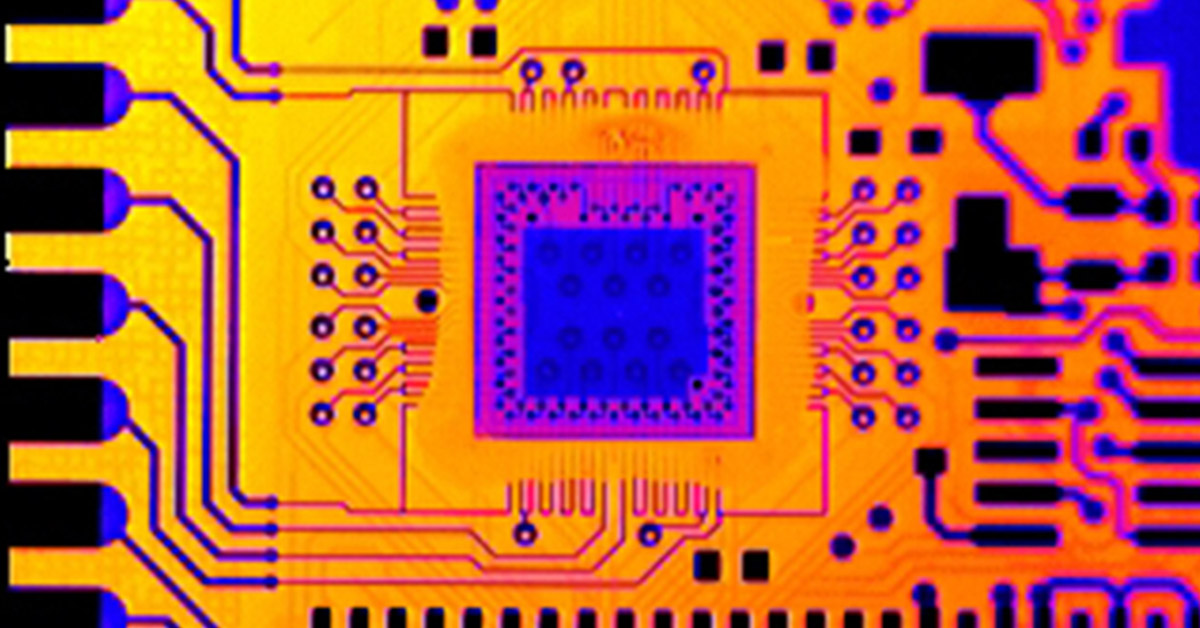 As electronic circuit boards and components get smaller and more powerful, inherent heat can cause significant damage. Infrared thermography can identify hot spots, allowing for improved thermal management and greater advances in circuit board design.

Electronics don’t like it hot. That’s why electronic systems designers are looking for ways to keep their components cool while the sizes of their devices shrink. As chips get smaller and their densities within components grow, heat can become a real problem—not only for devices used in civilian life, but in the military as well. In the latter case, the problem expands beyond inconvenience to one of safety. The armed forces depend on the quality of their electronics to maintain the integrity of weapons and communications systems.

One designer of VXI boards was experiencing a greater-than-normal flow of returns, with complaints about the boards overheating. The engineers were using simulation modeling to determine where to design in heat sinks and add fans to dissipate heat. They also mounted thermocouples to the board during testing and quality phases, hoping to identify potential design issues. With few results, they finally considered scanning the boards using an infrared camera.

Chris Bainter, US National Sales Director for FLIR, says infrared has an advantage over thermocouples. “First of all, how do you know where to mount the thermocouples if you don’t know where the hotspots are?” he asks. “Imagine mounting hundreds of probes to a board. It’s unrealistic and not really effective.”

Bainter visited the manufacturing site, bringing with him one of FLIR’s infrared cameras. After turning it on and aiming it at a board, the hot spots were instantly apparent—and they were nowhere near the heat sinks, fans, or thermocouples.

“In that first instant we saw the thermal image, we knew exactly where the hottest points on the board were, and which chips were hotter than anything else,” Bainter says.

Knowing where to start troubleshooting is just the first step. Infrared can also be constructive in designing a circuit board’s thermal management system. For this particular board design, the engineers realized their fans and heat syncs were not mounted near the hottest components. That begged the question: were they really needed? Or rather, had the engineers designed in additional weight and power draw with thermal management components that were no longer required? Knowing more about the device’s true thermal properties and heat dissipation can be keys to improving simulation models, improving overall design, and speeding up the rapid prototyping phase of the development cycle. 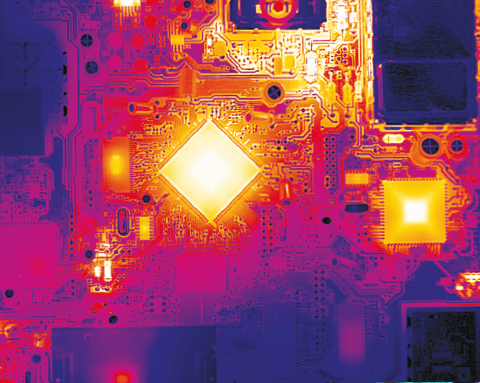 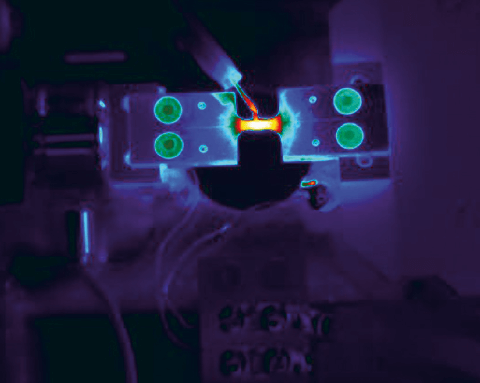 As devices continue to shrink, the challenges of heat grow. Imagine going from a VXI board that is roughly 9” x 13”, down to a device the size of a smart phone with individual components a few hundredths of a micron. Components of that size can’t even accommodate a thermocouple to measure heat. The solution is to attach an RTD probe, which is similar to but smaller than a thermocouple. But even this smaller probe can skew heat measurements by acting as a heat sink.

Another common use for infrared thermal cameras among electronics designers and manufacturers is detecting hot spots for failure analysis. In this case, measuring absolute temperatures isn’t as important as finding small hot spots that are causing subtle thermo-differentials. These hot spots can be indicative of failure points or troubles with the device. While passive thermal imaging works well, a technique called “Lock-In Thermography” can improve the sensitivity of the camera by more than 10 times, making it much easier to detect small, subtle hot spots.

Infrared inspection can also help with quality assurance by identifying insufficient solder. Insufficient solder increases circuit resistance at the solder joint and therefore raises the temperature sufficiently to be detected by an infrared camera. A faulty circuit will show up as a different temperature profile from a good one, and that can help determine whether the circuit should pass or fail.

The cost justification for thermography is growing as electronic components shrink. Today’s infrared cameras offer up to 16 times the resolution of cameras used ten years ago for nearly the same cost.Bainter believes that as costs continue to come down, thermal infrared cameras will become a standard thermal measurement tool on every test bench, alongside digital multimeters, oscilloscopes, and voltage analyzers. Technology advances will also factor in.

Where testing in electronics inspection is concerned, thermal imaging still has opportunities for advancement. One challenge to thermal imaging is correcting for surface emissivity. Many electronic boards have components with varying emissivities, some of which are shiny, and therefore, have a low emissivity. This makes them more challenging to measure for absolute temperatures. Techniques such as high emissivity coatings, image subtraction, and emissivity mapping are examples of ways to compensate.

In image subtraction, the infrared inspection system software captures an image before the device is energized, in order to create a thermal baseline. That baseline image is then subtracted from subsequent images after the device is turned on, thereby removing the static reflected temperature values, leaving only the true temperature deltas due to the heating of the device. Image subtraction effectively removes all the apparent thermal hot spots due to erroneous static reflected temperatures from lower emissivity devices and lets you focus on true thermal hot spots generated from the device itself. 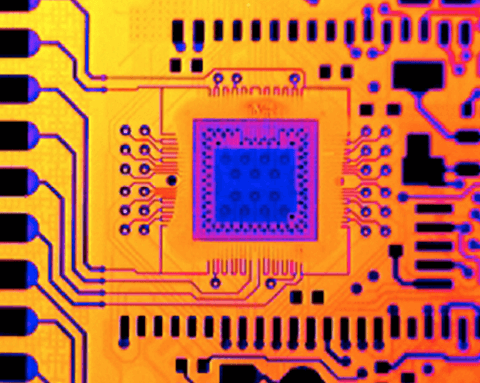 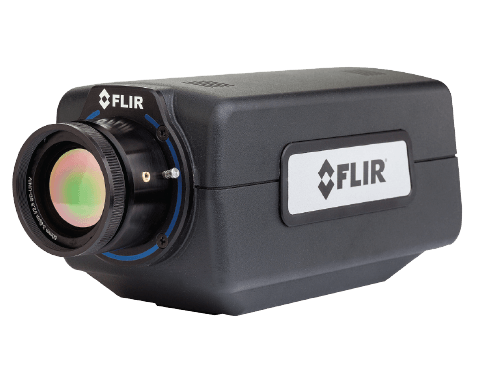 There are opportunities for thermography to advance into new applications, such as counterfeit product detection—another growing problem in military purchasing.

“Phony devices using cheaper materials and knockoff designs may have different thermal signatures from the originals, even if on the outside, they look similar,” Bainter says.

Those devices are widely available at bargain prices via the Internet, and according to a Government Accountability Office (GAO) study, suspect counterfeit and bogus military-grade electronic parts can be found on many Internet purchasing platforms. In fact, none of the vendors provided to GAO during a recent study were legitimate. After submitting requests for quotes, GAO received responses from 396 vendors, of which 334 were located in China; 25 in the United States; and 37 in other countries, including the United Kingdom and Japan. GAO selected the first lowest price bids and all 16 parts were provided by vendors in China.

With infrared imaging, where the rubber hits the road is testing and identifying a problem that once were impossible to find, or at least difficult to locate quickly. For manufacturers, their ROI would be images that pin-point a design flaw, thus reducing test times and time-to-market. Another advantage to thermal imaging is it allows engineers to see a complete thermal map of the circuit board, with temperature values for each pixel. There’s no concern about mounting thermocouples or RTDs in the wrong place, resulting in erroneous readings. Thermal images show exactly where the hottest points on a board are.

Of course, thermal imaging can be employed in many stages of the research and development process, beyond simple circuit board imaging.