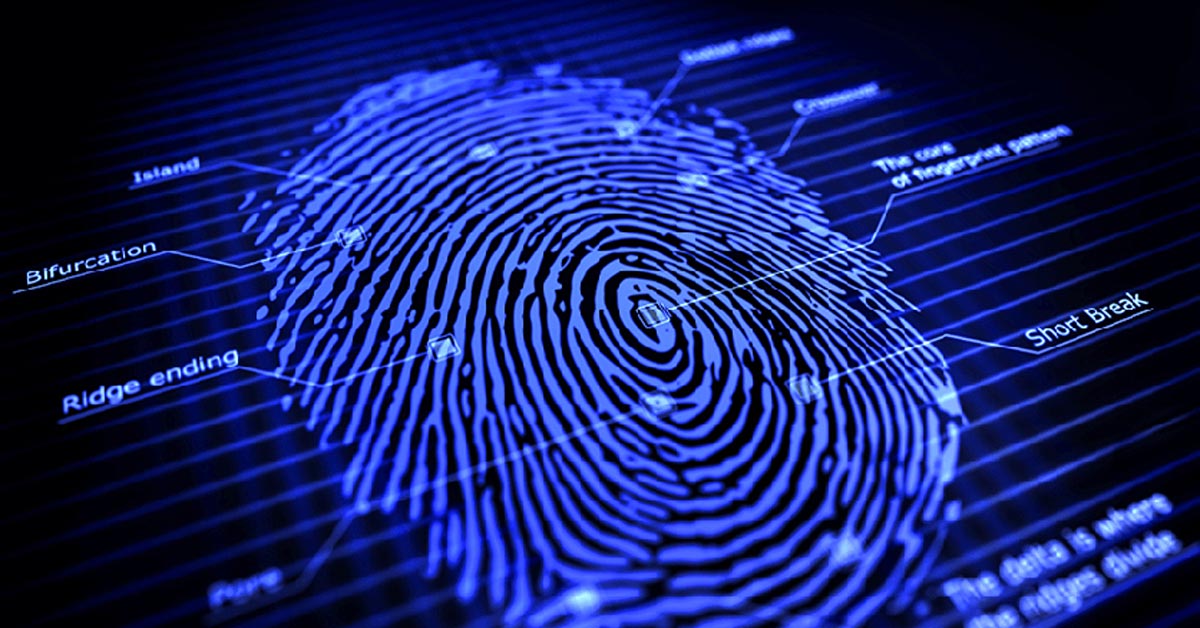 How Applying Steam to Blood-Stained Cloth Made Thermal Imaging Possible

Researchers looking for an alternative method of detecting the presence of dilute concentrations of blood on fabric have found a solution in thermal imaging. While blood is not visible on its own in the infrared spectrum, they discovered it was possible to create a thermal signature by introducing water vapor to a bloodstained sample. Despite some challenges with natural fibers, this thermal imaging method may be a preferable alternative to the use of luminol in forensic investigations.

When investigators in a TV crime series need to find evidence of blood, the first thing they do is spray the area with luminol and shut off the lights. While this adds drama to the story, it’s not the optimal solution for real-life investigators who need to find concrete blood evidence in less-than-ideal circumstances. This is especially true when working with fabrics carrying diluted bloodstains, which could easily be affected by the addition of liquid luminol. Chemistry researchers, Drs. Michael Myrick and Stephen Morgan, and their team at the University of South Carolina are investigating the forensic use of infrared cameras as an alternative method for detecting and recording evidence of biological fluids such as blood at crime scenes. 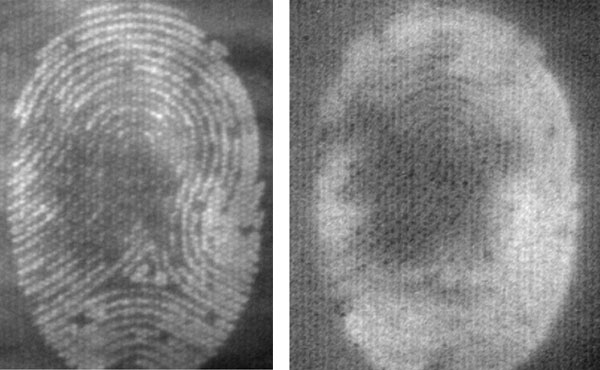 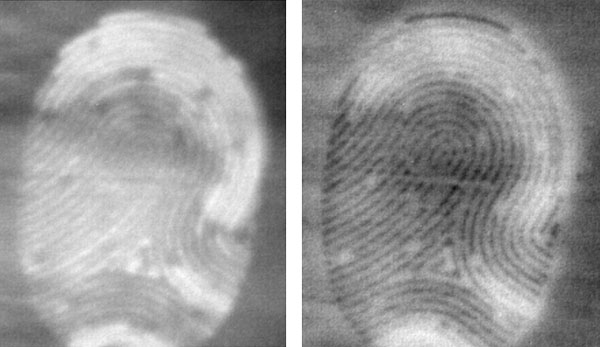 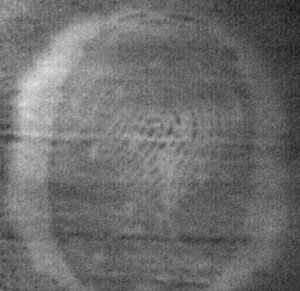 Figure 3. 10x diluted print on polyester shows both ridge patterns and a halo due to wicking of blood solids. Myrick and Morgan’s team noted that ridges absorbed water faster than the outer halo, and cooled at a different rate so the two patterns could be distinguished kinetically. 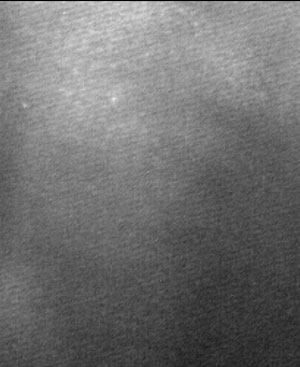 Figure 4. Blood’s adsorption/ desorption properties for water are very similar to those of cotton, so even whole blood prints are faint on cotton.

Luminol begins as a powder that is mixed with hydrogen peroxide before being applied to the surface being tested. If there is blood present, the iron in the hemoglobin will catalyze a reaction between the luminol and hydrogen peroxide, releasing electrons as visible photons of blue light. Unfortunately, luminol can react with other substances besides iron, causing a false positive.

Another issue with luminol is its potential effect on DNA testing: while the chemical doesn’t outright destroy DNA, it may affect some genetic markers.

Finally, the very act of spraying luminol onto the stain could make it smear or run. “So if you have ridge patterns, like a fingerprint, and you soak it with a liquid, then you might lose that completely,” says Dr. Myrick. Any opportunity to identify that fingerprint on the fabric would be lost. Over-diluting a bloodstain could also make it impossible to test the sample later for DNA.

The Challenges of Infrared

Dr. Myrick and his team were seeking a better way to visualize blood and other biological fluids for forensic investigations. Myrick was especially interested in a detection method that can be observed for longer than a few seconds, and can be repeated without destroying the sample. He and his team began studying the use of infrared reflectance to visualize blood. While it worked, the blood always appeared very faint in thermal images.

“Thermal imaging is not ordinarily a good way to visualize chemical contrast,” admits Dr. Myrick. He and his team were looking for ways to increase the sensitivity to blood, and settled upon steam as a method for creating a strong absorption band in the infrared spectral window. However, in attempting to improve one method, the team stumbled upon a much better one.

Graduate student Wayne O’Brien was assigned the task of saturating a cloth with deuterium oxide emitted from a travel steamer and taking reflectance measurements. O’Brien just happened to record infrared video as the steam hit the cloth and made a surprising discovery.

“The moment he turned on the steam, the 100-fold dilution stain he was showing me in infrared lit up like a lightbulb. The astonishing thing was that something we’d had such difficulty seeing before suddenly – boom – it was just really bright in the image,” says Myrick.

Plus, unlike luminol –which fades almost immediately – they discovered water vapor had a lasting effect on bloodstained fabric. “If you take a fabric and just run it in a moist environment at an elevated temperature, you can see the stain indefinitely,” Myrick says. “It’s not like it appears and disappears, you can see it forever as long as you continue to keep it under those moist conditions.”

Putting Their Method to the Test

Myrick’s team put their discovery to work in a study of blood fingerprints on three types of cloth. The ‘fingerprints’ came from a custom rubber stamp that they wetted and applied to three triple-dyed fabrics. Each piece of fabric received two fingerprint stamps of rat’s blood, one diluted at a 1:10 ratio and the other undiluted. The team then allowed the stains to dry for 24 hours.

When it came time to image the bloodstains, the researchers exposed the samples to deionized water vapor from a handheld garment steamer. They recorded changes to the blood on the cloth as they steamed it for three-second intervals over a long period, with pauses between each interval.

Adding water vapor to the sample causes an immediate production of heat. Dr. Myrick likens this process to stepping from a dry, air-conditioned room out into a warm, humid day. Every article of clothing you’re wearing would immediately absorb water vapor, causing a slight increase in temperature. This kind of increase is easy to see in infrared.

Just as adding water produces heat, taking away the vapor source causes cooling. But hydrophobic fabrics such as acrylics or polyester hold very little water and come to equilibrium quickly. As a result, the blood stained area will appear to cool slower than the rest of the fabric. This causes a temperature difference that, again, is easy to see in infrared.

“You get both positive and negative contrast on something that absorbs water, depending on how fast it absorbs and how quickly it desorbs. And you can repeat that over and over,” Myrick explains.

For the first set of recordings they attached a 50 mm lens to a FLIR A6751sc SLS camera in order to image the entire print. The A6751sc offers a fast frame rate and a 480 ns integration speed, allowing researchers to record fast thermal transients. A second set of recordings using a 13 mm lens allowed Myrick’s team to observe a single magnified “fingerprint” ridge. In both cases, the team operated the camera through FLIR’s ReasearchIR software.

Full-print images from both the acrylic and polyester cloth clearly showed the presence of the whole and diluted blood. The stains on acrylic cloth also offered enough contrast to distinguish ‘fingerprint’ ridges. On the polyester fabric, the team observed a thermal ‘halo’ around the 10x dilute print which was caused by blood solids wicking into the fabric. When looking at the thermal data over time, the team noted that the ridges on polyester absorbed the water vapor faster than the outer halo. This allowed the team to distinguish between the ridges and the halo.

Myrick’s team found some difficulty in imaging the blood prints on cotton. This is because, at up to 20 percent water by weight, cotton fabric absorbs just as much water as the bloodstain itself. In contrast, synthetic fibers such as acrylic and polyester don’t absorb water as readily.

“That has a lot to do with the chemical makeup of the fibers and how the fibers themselves are structured,” explains Raymond Belliveau, a graduate student member of Myrick’s team.

“Cotton’s a messy fabric and it has loose fibers all over the place,” adds Myrick. “And the rate at which the threads absorb water is different. The response of a single fiber is extremely fast.”

For this reason, the team saw greater success when imaging magnified print ridges on cotton. They noted visible contrast between whole blood on individual raised threads and the rest of the cotton fabric. This contrast was only visible for the 30 ms it took for the raise threads to absorb the steam.

“The A6751sc allowed us to do high speed measurements, where you literally see fiber light up just for one frame,” explains Myrick. After that, the bulk of the fabric had absorbed enough water vapor to wash out any thermal difference between the whole blood and the cotton.

Figure 5. Individual threads within the whole blood print stand in contrast to the rest of the cotton fabric.

The print ridge from the whole blood stain is readily visible on the acrylic cloth, although it is broken in places where the fabric weave prevented the stamp from contacting the entire surface. 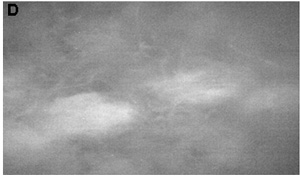 Figure 6. A break in the ridge pattern appears where the weave of the acrylic cloth prevented full contact between the stamp and the fabric.

The whole blood print was only faintly visible during steaming, and like the acrylic sample, had a weave that prevented full contact between the fabric and the stamp. However, because the warp (vertical direction of threads) is raised compared to the weft (horizontal direction), blood solids on the warp are more visible.

Figure 7. The blood print ridges are only visible on the raised warp of the fabric.

Based on Myrick’s results, thermal imaging may be a viable alternative to luminol when determining whether fabric has been stained with blood. It may even be preferable – as the water vapor needed to facilitate imaging doesn’t further dilute the stain or have any potential for ruining evidence. While the use of water vapor poses some challenges for cotton, high speed, high resolution infrared cameras may provide a work-around. A science camera such as the FLIR A6751sc has the frame rate and integration speed needed to record the rapid heating or cooling of loose cotton fibers, which can be enhanced with a magnification lens. Myrick and his team will continue investigating the use of high-speed imaging on cotton threads in hopes of refining the process.