Engine pre-heating systems are becoming an ever more valuable asset and even a competitive advantage on today's car racing tracks. Many racing professionals acknowledge the value of this technology, because it helps them prevent engine wear, poor performance on the track and even the loss of hard dollars. Hot Products Engineering, a US manufacturer of pre-heating engines, puts a lot of effort into spreading the gospel about engine pre-heating. The company now also uses thermal images taken by a FLIR camera to show the value of its engine pre-heating products.

Warming up the engine is one of the essential rituals every motor racer performs before getting on the track. Until recently, for many racing disciplines (kart, drag racing, etc.) this ritual just meant starting the engine cold and revving it. However, even without the issues of racket, risk, and stink, starting a racing engine cold is always a poor choice if there's an alternative, because it involves metal-to-metal friction, incomplete combustion, and expensive race fuel to warm it up.

Warming up the engine is one of the essential rituals every motor racer performs before getting on the track.

The Advantages of Preheating

Race car engines will only achieve peak power at a very specific temperature. An engine pre-heater will ensure that he engine is always within a narrow range of that temperature, so that maximum power will be available right from the start. That ideal temperature depends largely on the type of car being raced. Engine temperature will not only affect racing performance; an insufficiently heated engine can also result in cold-temperature-related engine failure, causing a driver to not even finish the race. Additionally, cold starts can cause significant engine wear. Pre-heating can save racing teams hard dollars while reducing engine wear, saving on expensive rebuilds, and virtually eliminating the risk of an expensive cold-piston seizure.

The whole reason we need to let our engine warm up revolves around the concept of linear thermal expansion. An engine is made up of a number of different materials. The piston is made from a certain type of aluminum alloy, the cylinder another type of aluminum alloy, the rings cast iron or steel, the valves from steel, stainless steel, or titanium, and the guides are made from yet another material. Once the engine is started, these components begin to heat up from combustion and friction as they slide back and forth. None of these materials are exactly alike, and because of this they will expand when heated or contract when cooled at different rates. This interaction between material and change in temperature is predictable and linear. When a cold engine is first started the piston heats up and expands first. Heat is transferred from the piston to the rings and then to the cylinder wall. If we rev the engine and generate lots of combustion cycles and increase the frequency of friction too early the piston will grow much faster than the cylinder. If there is not adequate space between piston and cylinder to account for this growth, the engine could suffer that is known as a cold seizure. By allowing the engine to warm up before you start riding, you allow all the components in the engine to slowly expand and stabilize. Once the engine is warm, changes in the engine part dimensions are less drastic and there is much less risk of damaging the engine. 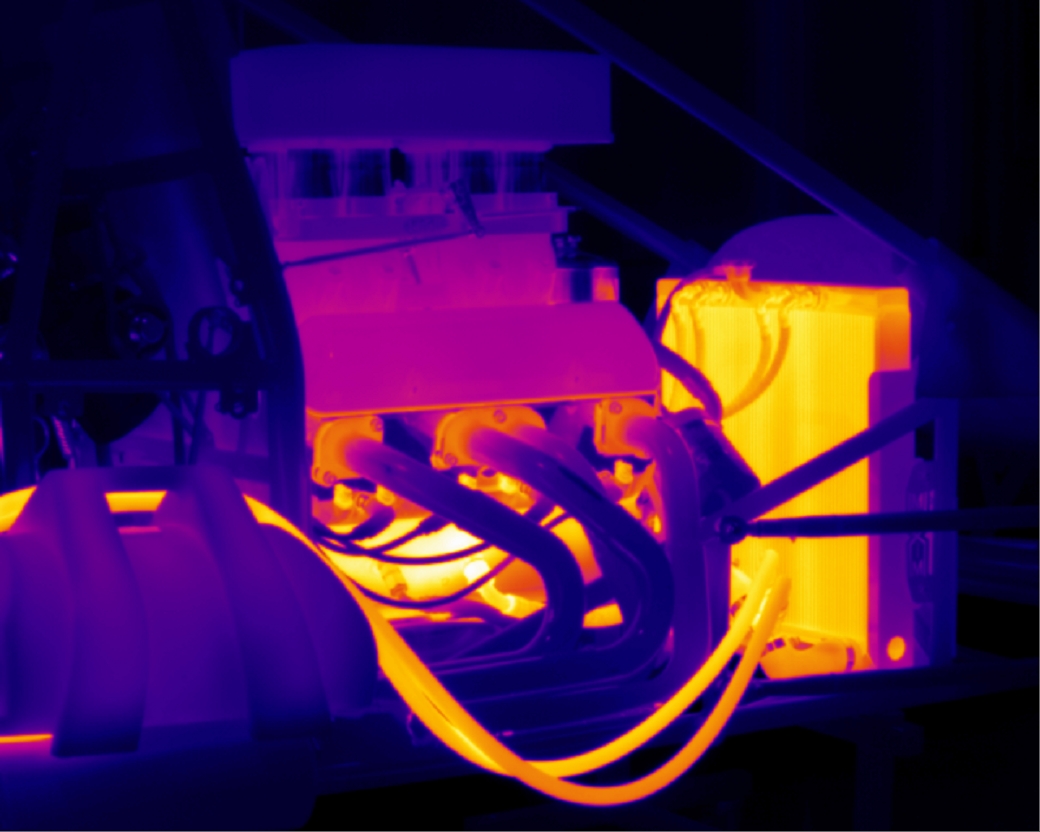 The thermal imagery produced by the FLIR SC6700 clearly shows how the temperature quietly builds and maintains exact between 135°F and 210°F.

In a test set-up along a drag racing track, a FLIR SC6700 was used to capture the result of a Hot Head DragPro competition Engine Heater. The thermal imagery produced by the FLIR SC6700 clearly shows how the temperature quietly builds and maintains exact between 135°F and 210°F. This set-up does not come from out of nowhere. Thanks to his background and experience with the National Laboratory, the founder of Hot Products Engineering, Pete Davis, is no stranger to the power of thermal imaging: "I have used thermal imaging cameras before o study thermal patterns in a research and development context, so I knew that these cameras can see things that aren't visible to the naked eye."

So when Pete Davis started a company that would manufacture engine preheating systems – a product that obviously solves a temperature-related problem for its customers – he knew that thermal imaging would be able to show racing professionals the value of a pre-heating system. "We are constantly developing new markets for our engine pre-heating systems and so we need to educate our customers all the time about the value of our products. Thermal imaging is a great help for this, and we rely heavily on the images that we have captured with the FLIR SC6700," Pete Davis continues. "Before, we really had no visual information about the efficiency of our products, until we used this thermal imaging camera."

"The FLIR images also help us establish our image of a science-based company. Hot Products Engineering (HPE) is based in Pleasanton, California just over the hill from major universities, National Laboratories and Silicon Valley. These surroundings play an important role in efficiently developing
our products.

Working with the FLIR SC6700

The FLIR SC6000 Series cameras offer high speed and high resolution imagery in a package that is easy to use, yet flexible in configurations for just about any scientific or research application. "The FLIR SC6700 thermal images present the heat build-up of the engine in great detail," says Pete Davis. "The FLIR camera is very advanced, but still easy enough to use and it reveals its info very swiftly to the user. Additionally, the FLIR SC6700 offers you a lot of options, after the image capture, to visualize, explore or modify your thermal images."