Without the appropriate tools for adequate thermal measurement and testing, automotive design engineers can lose time and efficiency, and risk missing defects that lead to dangerous products and expensive recalls. For example, US automakers recently recalled millions of cars, SUVs, and trucks due to faulty airbags with problems ranging from micro-cracks in passenger activation systems to defective inflators. These flawed systems are not only dangerous to drivers, but also harmful to the bottom line for manufacturers, who face lawsuits, fines, and loss of public confidence.

Next generation infrared camera technologies may offer engineers a solution. These cameras incorporate 640 x 512 pixel high resolution detectors that can capture images at a rate of 1000 frames per second. Additionally, newer detector materials, such as Strained Layer Superlattice (SLS), offer wide temperature ranges with a combination of great uniformity and quantum efficiency beyond that of earlier MCT and QWIP detector materials. These new technologies, plus the ability to synchronize and trigger remotely, give engineers and technicians the tools they need to address the difficulties of high speed automotive testing.

Infrared cameras with uncooled microbolometer detectors are also unable to measure temperature accurately at extreme high speeds. These cameras have long exposure times which cause blurring in the thermal image. In order to visualize and take accurate temperature readings on extremely fast moving targets, you need a cooled thermal camera with a short exposure time and fast frame rate. Let’s explore both detector types to better understand the benefits and drawbacks of each as it relates to high speed thermal measurement.

The difference between thermal and quantum detectors comes down to how the sensor translates infrared radiation into data. Thermal detectors such as uncooled microbolometers react to incident radiant energy. Infrared radiation heats the pixels and creates a change in temperature that is reflected in a change in resistance. The benefits of uncooled microbolometer cameras include durability, portability, and low price. However, the drawbacks include slow frame rates – around 60 frames per second – and slow response times (time constant). Because of this, uncooled microbolometers can’t produce a crisp, stop-motion image of a fast moving object. Instead, the slow frame rate and response time lead to blurring in the image and ultimately inaccurate temperature readings. Slow frame rates also prevent these cameras from accurately characterizing objects that heat up quickly. 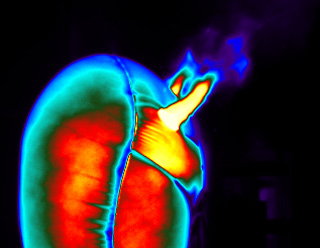 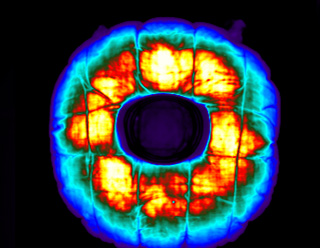 In comparison, quantum detectors made of Indium Antimonide (InSb), Indium Gallium Arsenide (InGaAs), or SLS are photovoltaic. The detectors’ crystalline structures absorb photons that elevate their electrons to a higher energy state; this changes the conductivity of the material. Cooling these detectors makes them very sensitive to infrared radiation, with some able to detect temperature differences of less than 18 mK or .018°C. Quantum detectors also react quickly to temperature changes, with a time constant on the microsecond time scale, rather than multiple milliseconds. This combination of short exposure times and high frame rates makes quantum detectors ideal for stopping motion on high speed targets for accurate temperature measurement as well as proper characterization of how thermal temperatures rise over time on fastheating targets. These cameras are generally more expensive and typically larger than uncooled microbolometer cameras: factors some research teams may need to take into consideration.

Fast Frame Rates are not Enough

As mentioned briefly before, the ability to record hundreds or thousands of frames per second is only part of what is required to stop motion. Another element of the equation is integration time, or how long the camera collects data for each of those frames.

Integration time is analogous to shutter speed in a digital camera. If the shutter stays open too long, any motion in the image it captures will appear blurred. In the same way, IR cameras with long integration times will record blurred motion. A bouncing ball, for example, will look like a comet – with a trail of motion behind it.

The number of analog to digital converters, or channels, a camera has, plus the ability to process pixels at high speed, are also important. High speed IR cameras typically have a minimum of 16 channels and have processing speeds – or pixel clock rates – of at least 200 MP/ sec. Most low performance cameras have four channels and run at pixel clock rates below 50 MP/sec. 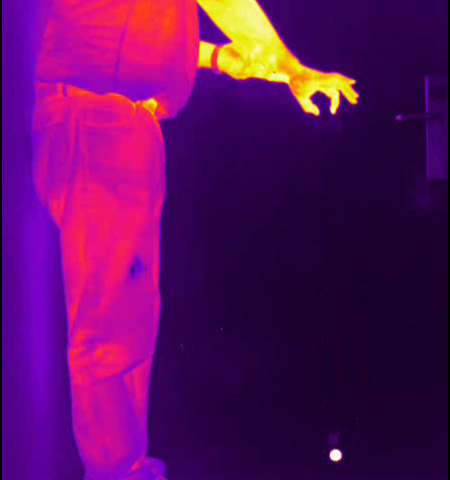 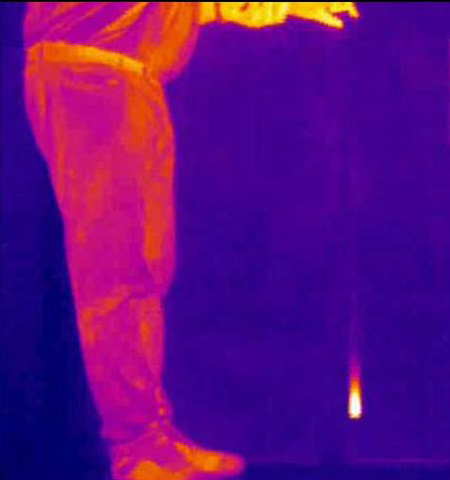 The temperature of your target can have an impact on integration speed and, ultimately, the digital count. The camera converts digital counts into radiance values used for the temperature readings on your target. Hotter targets emit more radiant infrared energy, thus more photons, while colder targets emit fewer photons. The challenge becomes how to accurately measure temperature on colder targets at fast frame rates, because fast frame rates require shorter integration times.

Compounding the issue is the fact that older detectors – with previous generation Read Out Integrating Circuits (ROIC) – were non-linear at low well fills. This caused the Non-Uniformity Correction to break down, resulting in poor imagery and questionable temperature measurement accuracy. Now with the next generation ROIC designs, detectors offer linearity to low well fill, allowing for accurate measurements at high speeds (short integration times) on colder targets. This is why it is critical for high speed infrared camera to have a next generation ROIC with linear response to low well fill.

Getting the Timing Right

Another factor to consider is the camera’s ability to synchronize and trigger to external events, such as synchronizing to a rotating brake disc or the ignition of a combustion engine. When a camera system is running on an internal clock, the detector’s integration start point and data output are set by the clock. You could miss some of or the entire event if it doesn’t happen to correspond exactly with the integration period. A separate triggering system can help you better synchronize recordings by strictly controlling the integration start time and the frame rate. Uncooled microbolometer detector cameras do not offer this capability because they have thermal resistive elements that cannot be externally controlled. This is another reason why a photon counting detector camera is essential for high speed thermal testing. 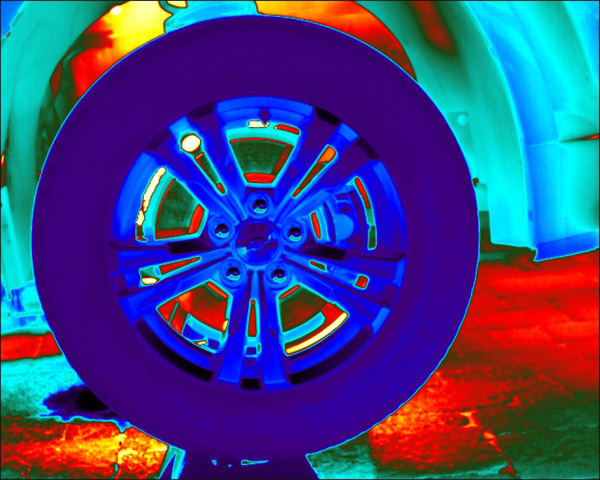 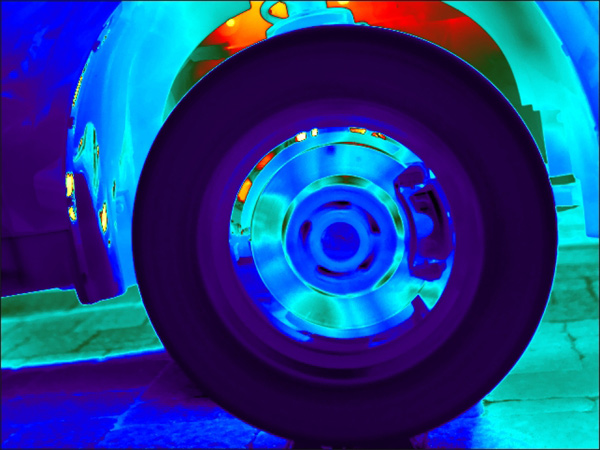 A significant advantage of cooled IR cameras is sensitivity. The cooled cameras can detect subtle temperature changes, as little as 0.02°C. Typically, uncooled cameras have a sensitivity of around 0.03°C. While a .01°C difference may appear small, it represents a 30% improvement in sensitivity. The cooled camera not only produces less digital noise, but the image it produces is more finely detailed. The ability to detect such subtle temperature changes helps you better detect small hot spots.

The one advantage to uncooled microbolometer cameras is they detect longwave infrared in the 7.5 - 14 μm spectral range. More photons pass through the longwave band than shortwave or midwave, meaning it would take less time for a quantum detector to collect enough photons to create a charge. Specifically, a blackbody at 30°C emits nearly 10 times more photons in the 8-9 μm range than in the midwave 4-5 μm range. Typically, quantum detectors operate in the shortto midwave infrared. However, detectors made from Strained Layer Superlattice (SLS) detect longwave infrared in the 7.5- 9.5 μm spectral range. Because there are more photons to detect, SLS detectors have extremely short integration times, up to 12 times faster than InSb detectors.

They are more efficient than other quantum detectors at converting photons to electrons and offer more thermal contrast when imaging cold targets. The advantages of LWIR SLS detectors are much wider temperature ranges and much shorter exposition times, which can help if your target heats up across a wide band of temperatures or is moving spatially very fast.

By including thermal imaging during the design and testing phases of automotive engineering, research and development teams can more readily identify weak points and improve overall product performance and safety. But the type of camera and its features can have an impact on imaging success. Choosing a cooled thermal camera with the highest speed, sensitivity, and integration times available will allow researchers to accurately track temperature shifts over time on high speed applications. These cameras will also provide crisply detailed stop motion frames, so researchers can accurately measure temperature and thermally characterize their products in order to identify the exact moment a problem begins.