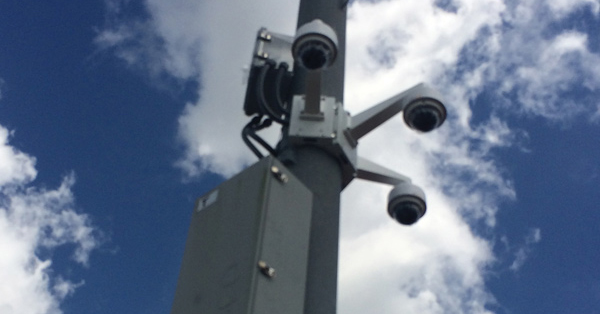 Just north of Miami, Port St. Lucie, Florida, is a booming city, even by the growth-driven standards of the Sunshine State. Largely undeveloped in the early 1950s, the city has grown to over 170,000 residents within the city limits, and supports over 430,000 people across its metropolitan area.

With that growth, Port St. Lucie faces new safety and security challenges. A fatal shooting in a public park in 2013 brought the urgent need for improved security to the forefront. Working with Floridabased security company SecurPoint, the city installed a wireless, IP-based video surveillance system from FLIR in its third largest park to determine the technology’s viability for wider deployment.

“When we did the initial walk through with city staff, we were amazed by the size and scope of the system that they were looking for,” said SecurPoint CEO Brian Morell. “It was only after our initial meeting with FLIR staff that we determined we could meet and exceed the city’s requirements.”

The city wanted to take advantage of the latest developments in imaging and safety technology. While limited in initial scope, the system needed to be designed with future expansion in mind, allowing it to scale quickly and easily across the city as future budgets permitted.

City officials selected Whispering Pines Park for the initial deployment, due to its 36-acre size, as well as its numerous facilities. These included a baseball field, tennis courts, playgrounds, and a football field, as well as open spaces, parking, common entrances, and exits. SecurPoint worked with FLIR to create a system that included 98 Quasar 5MP cameras with built-in IR imaging that enabled safety and security staff to identify potentially problematic activity within the park at night, and during the heavy rains common along the Florida coast. The football field alone gained 25 cameras to monitor both the playing surface and stands.

The cameras were mounted on poles using high-speed wireless networking, which gave the city tremendous flexibility in choosing camera placement. Plus, all of the cameras could be monitored using a centralized FLIR Horizon network video recording system.

“The wireless high speed network allowed us to place the cameras virtually anywhere, without being limited by wiring or nearby structures,” said Morell. “I am amazed at how many cameras and the quality of the images we can produce from a single centralized server.”

“Many integrators and manufacturers said that a system–never mind a wireless system–as robust as the city required could not be cost-effective, but by teaming up with FLIR, we were able to execute it with ease and really impress the city’s staff,” said Morell.