Auckland’s Tamaki Drive is an iconic city amenity and one of Auckland’s most attractive and high profile routes. A major access way to and from the city, Tamaki Drive is also a recreational resource for the local community and the city, and a place of significant cultural importance to Maori. Motorists, cyclists, public transport operators, pedestrians and tourists all share the area, placing high demands on pedestrian, transit and parking facilities. In an answer to the continuing bicycle safety problem at Tamaki Drive, Auckland Transport commissioned an independent safety audit in 2010. This led to the definition of several traffic safety-related projects, including the installation of cycling lanes, the redesign of street furniture, and more specifically a bicycle warning system intended to reduce vehicle speed and make drivers more aware of approaching bicyclists.

Traditional, continuously flashing warning signals havea reduced effect, because motorists do not really receivea real stimulus to change driving behavior. This is not thecase with detection-based warning signals, which can beactivated based on the detected presence of bicyclists.

One location of focus on Tamaki Drive was where motorist can take a right turn into Ngapipi Road, away from the main road of Tamaki Drive. This had proven to be a spot with a high risk of collisions between motorists and bicyclists. “We needed a way to increase the safety of cyclists at Tamaki Drive and to enhance their visibility to motorists when these drivers are about to turn right,” comments Karen Hay, Manager Road Safety & Road Corridor Operations at Auckland Transport. “We were looking for a system to make drivers more aware that they are sharing the road with an upcoming cyclist and at the same time, it needed to give our cyclists more confidence that their safety was taken into account. We needed a system with direct visual verification and fast detection of cyclists and one that can make a distinction between bicycles and vehicles. That is exactly what we found with FLIR Systems.” “Warning lights are very effective in enhancing driver awareness and impacting on their behavior in ways that reduce risk to cyclists,” says Nico Verstraete, Business Development Manager ITS at FLIR Systems. “However, traditional, continuously flashing warning signals have a reduced effect, because motorists do not really receive a real stimulus to change driving behavior. This is not the case with detection-based warning signals, which can be activated based on the detected presence of bicyclists. 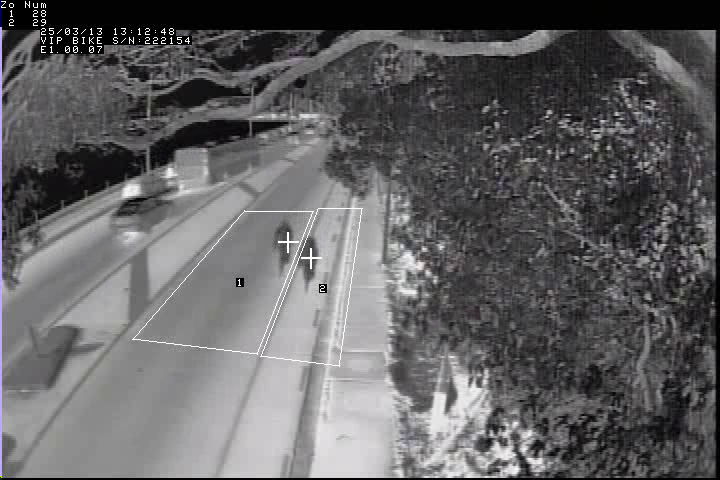 ThermiCam gives traffic managers uninterrupted, 24-hour detection of cyclists regardless of the amount of lightavailable and regardless of whether cyclists use the bike lane or main vehicle lane.

How this bicycle presence information needed to be collected was still a remaining question. Auckland Transport was not really a stranger to the ITS technology of FLIR Systems. The organization had been using FLIR technology for quite some time, with incident detection technology in the Victoria tunnel and Wellington tunnel in Auckland, vehicle presence sensors in Halsey/Gaunt in Auckland and pedestrian presence sensors at 13 crossing sites. However, the detection of bicycles with FLIR sensors was new to Auckland Transport and only came into the picture after having investigated other options, which afterwards turned out not to be ideal. The first option Auckland Transport investigated was the use of visual-light video detection (non-FLIR). "Traditional video-based detection gave good results on bike and car detection," says Nico Verstraete. "However, differentiation between bikes and vehicles in dark or night conditions was difficult, because bicyclists not always use their onboard bike lights." A second option that was investigated was inductive loops integrated into the bike lane. These loops analyze the electromagnetic signature of a bicycle wheel and as such are able to provide bicycle presence information. “This technology was not ideal, due to the fact that bicyclists not always conscientiously take the bicycle lane, which makes them miss the inductive loop altogether,” says Karen Hay. “Next to that, inductive loops cannot always collect presence information of carbon fiber bicycles, due to their lack of metallic material that can trigger the loop sensor.”

Luckily, at a FLIR training session on the latest developments in ITS technology, Auckland Transport learned about a new solution that could overcome these problems: the FLIR ThermiCam vehicle and bike presence sensor. “ThermiCam is an integrated thermal camera and detector for vehicle and bike presence detection and counting that can be used to control traffic lights as well as traffic warning signals,” says Nico Verstraete. “ThermiCam detects vehicles and bicycles based on heat information coming off these road users and will transmit its detection information over contact closures or over IP to the traffic light controller. This makes it possible to control warning signals dynamically, based on actual information of bicycles.”

The big advantage of this thermal traffic sensor is that it uses the ever-present heat energy of bikes and vehicles to make a perfect distinction between the two. Also, ThermiCam is able to detect bicycles in the darkest of nights and over a long range. As a result, it gives traffic managers uninterrupted, 24-hour detection of cyclists regardless of the amount of light available. And last but not least, ThermiCam offers reliable vehicle and bike presence detection in various conditions that are tough for traditional, visual cameras, such as sun glare, wet road surfaces, car headlights, shadows, snow or fog. “The installed ThermiCam sensor on Tamaki Drive has proven to be very effective,” says Karen Hay. “The detection of bicycles is very fast and very accurate, regardless of whether we are looking at a carbon fiber bike or not. This is definitely a most useful tool that we will consider within our mix of preferred ITS technologies.”