The first step in a successful traffic and conversion program is having traffic count data that everyone trusts and believes. Without confidence in the data, managers will focus their effort on questioning traffic counts instead of applying the insights to improve performance.

“If you can’t trust your traffic count data, nothing else matters,” says Mark Ryski, CEO and Founder of HeadCount Corporation and author of Conversion: The Last Great Retail Metric. “It all starts with an accurate traffic count and getting that is not as easy as it sounds,” he says. “In fact, it’s not uncommon for even the largest, most sophisticated retailers to struggle with traffic count quality issues.”

Ryski says it’s critical because traffic data is the foundation for calculating conversion rates and ultimately measuring store performance. “When we provide a traffic and conversion report to a store manager we expect that she will make decisions and take action based on this information – she can’t afford to second guess the data and neither can we as the analytics provider.”

Beyond day-to-day decision making, increasingly retailers are incorporating conversion rate goals into compensation plans, which rightly creates an even higher level of scrutiny.

It all starts with an accurate traffic count and getting that is not as easy as it sounds.

For retailers, the biggest decisions often hinge on the smallest data point. By starting off with the best traffic counting technology available, retailers can establish trust in their data from the outset, rather than trying to regain it later – which is significantly harder to do.

Yankee Candle, a 600+ store candle and gift retailer, is a good example. When HeadCount started working with Yankee Candle, they had two different types of traffic counters installed in about one-third of their stores, and they were having traffic data quality issues with both of them.

According to Alex Winiecki, who was the Senior Vice-President of Retail for Yankee Candle at that time, “no one trusted the traffic counts at all and the count data were incomplete and incorrect.” Today, HeadCount installs only FLIR cameras in all new Yankee Candle stores and continues to upgrade locations where old counters were installed.

As Winiecki recounts, “later, even with new trafﬁc equipment installed by HeadCount, we had some store managers tell us that they didn’t believe the trafﬁc counts. HeadCount would immediately get on the phone with the store manager and work through their questions and even conduct audits to prove the counts were right until the manager could say, ‘yeah, that’s it. That’s my number.”

A similar scenario played out when HeadCount began working with office supplies leader Staples Canada who was almost two years into their traffic and conversion program that produced more frustration than results.

According to Staples, what HeadCount was able to do beyond a shadow of a doubt was re-establish trust in data integrity. “If you see huge swings in data, instead of asking questions, managers will disengage. I knew if that happened I would lose buy-in and the entire trafﬁc and conversion program would lose traction. My ﬁeld managers trust the data and that is a critical beneﬁt of working with HeadCount,” says Lindsay Gillians, Manager, Retail Customer Experience Solutions, Communications & Services Operations with Staples Canada. Says Ryski, “It’s HeadCount’s job to deliver reliable, actionable insights. Our clients rely on us and we rely on FLIR traffic counting cameras for accurate and reliable data.”

Why FLIR Technology Stands Out: Accuracy, Functionality and Reliability

HeadCount has been serving retailers for almost 15 years and over that time has tested and deployed virtually every type of traffic counter available. While HeadCount still considers itself ‘technology agnostic’ and continues to evaluate new traffic counting technologies, there are several reasons why    FLIR has become its de facto standard.

According to James Cummings, HeadCount’s Vice President of Operations who oversees all technology implementation and support of traffic counters, FLIR has earned HeadCount’s trust.

“We evaluate traffic counters based on three primary criteria: count accuracy, functionality and reliability and FLIR is the only traffic counting solution that delivers on all three.”

Accuracy – Not just About the Sensor

According to Cummings, some retailers are led to believe that you can simply string up a bunch of traffic counters in your store and you’re off-to-the-races, but that’s not how it works in reality. Says Cummings, “there are numerous factors that can impact traffic count accuracy including store entrance configuration, merchandising and ceiling height to name a few. You can have the best device in the world, but if it’s not installed and calibrated properly and constantly monitored, you won’t get consistently clean, reliable traffic counts.”

You can have the best device in the world, but if it’s not installed and calibrated properly and constantly monitored, you won’t get consistently clean, reliable traffic counts.

Merchandising and display fixtures near the front entrance can be particularly problematic, says Cummings, “some retailers we work with have elaborate merchandising displays at the front entrance of their stores and this can wreak havoc with traffic counters. FLIR device management software is very sophisticated and enables us to set very precise count lines which define the moment a count is captured – even around complex merchandise displays.”

While virtually all traffic counter manufacturers make claims about accuracy – 95% accuracy seems to be most cited – these can often be theoretical or lab results and not based on tests conducted in actual field conditions. Says Cummings, “now with over five years’ experience working with FLIR sensors and many thousands of installations, I can tell you that we are achieving accuracy levels of 95% routinely and frequently even higher.” 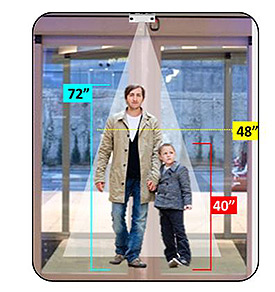 But setting height thresholds is only one of the more obvious features. According to Cummings, “all traffic counters need to be constantly monitored and maintained. From sensor monitoring and trouble-shooting to conducting traffic count audits, the device management software tools with FLIR are truly superior to anything else we’ve tested.

Traffic count auditing is one of the most important features and at HeadCount, it’s used frequently. Says Cummings, “it’s not uncommon for store managers to question the accuracy of their traffic counts, and it’s HeadCount’s job to not only ensure they are correct, but to also provide managers with evidence to prove it.” According to Cummings, FLIR’s device management software provides a number of ways to audit counts including recording video samples or watching counts in real-time.”

Reliability – A Function of Quality

Traffic counters represent a significant capital investment, particularly in chains with hundreds or even thousands of stores, so cost is a significant factor in the purchase decision. According to FLIR, FLIR Brickstream sensors have a Mean Time Between Failures (MTBF) of 10 years and HeadCount’s experience corroborates this.

FLIR Brickstream cameras are not the least expensive traffic counters, but when it comes to reliability, quality matters and you do get what you pay for.

At HeadCount, we refuse to install cheap, substandard traffic counters – we would be doing our clients a disservice if we did.

“Tight budgets are typical in retail and naturally our clients are looking to keep costs down. But the real cost of supporting poor technology, not to mention the negative impact inaccurate or incomplete data can have on a traffic and conversion program, is significantly higher than investing in a quality traffic counter from the start. At HeadCount, we refuse to install cheap, substandard traffic counters – we would be doing our clients a disservice if we did,” says Cummings.

Today, retailers are bombarded by companies selling a vast array of sensors, cameras and data systems – it can boggle the mind. While these systems are interesting, retailers need to be clear about their data priorities. Traffic counting should be at the top of the list.

Some systems claim to capture multiple data streams in a single device, in addition to traffic counting, and thus provide retailers with a hedge against future needs – ‘future proofing’ the store.

The reality is that more bells and whistles don’t necessarily deliver more value on its promise to future proof your stores. In fact, adding too many other functions can actually degrade the device’s reliability and impact traffic counting functionality.

As the leading expert in store traffic and conversion analytics Ryski says, “retailers are often lured by cool technology and promises of deeper insights and better business results, but many of these systems have yet to be proven and the value of the insights is questionable. I’d advise all retailers to start with a solid foundation of store traffic and conversion analytics first before spending time and resources on more speculative analytic efforts.”

So then, what’s the most effective way to ‘future proof’ your retail business? Install traffic counting technology that is stable, reliable and has a demonstrated life span in the field – for HeadCount, the answer is clear, Brickstream by FLIR.