German public-service broadcaster, ZDF, produced a documentary on the greenhouse gas carbon dioxide (CO2) and its pricing for the global business magazine show, makro. To do so, ZDF reporter Manfred Kessler and photographer Armin Vater needed a reliable method to demonstrate the presence of CO2, which is invisible to humans. They found the right solution with FLIR Systems, the global market leader in thermal imaging, which produces a camera specifically for visualizing CO2.

ABOUT 3SAT AND MAKRO

3sat is an ad-free, German language public television station run as a joint effort by ZDF, Austrian broadcaster ORF, Switzerland’s SRG SSR, and the ARD regional broadcasters. Lead by ZDF from its broadcasting center in Mainz, the station produces many informative shows in-house. The magazine show, makro, reports weekly on global economics with an eye for people, detail, and the overall global context.

Cameraman Armin Vater and his colleague Lasse Brünjes filming at Frankfurt Airport with the FLIR GF343.

Reporter Manfred Kessler says he was prompted to seek a collaboration with FLIR Systems after seeing videos that demonstrated the ability of certain thermal imaging cameras to visualize CO2. “In videos you can clearly see how a thermal imaging camera with a special filter visualizes CO2 emissions—for example, from people or animals breathing out CO2. But this camera also shows the emissions from cars, airplanes, or chemical plants.” 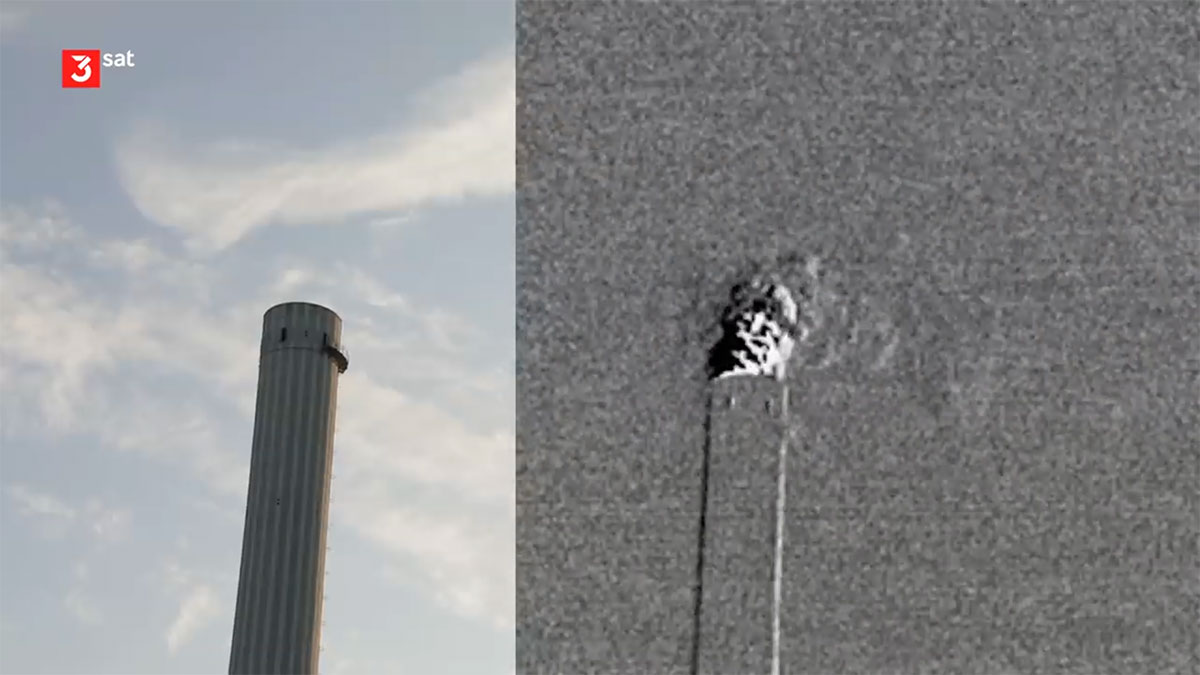 A chimney at a chemical plant seems inactive to the naked eye. But the FLIR GF343 shows a clear CO2 plume.

Of course, not every thermal camera can see gases. Typically thermal imaging cameras only display different temperatures in the scene as colors to visualize heat. It takes a camera with a cooled detector, specific wavelength, and special filters to see gases. While conventional thermal imaging cameras have become more common in recent years with affordable options such as FLIR ONE® smartphone attachments, there are only a few cameras capable of visualizing CO2 in all of Germany.

A LOOK INSIDE THE CAMERA

The FLIR GF343 has a highly sensitive detector made of indium antimonide (InSb), a chemical compound of the elements indium (In) and antimony (Sb), which are suitable materials for infrared sensors in optoelectronics. This detector has been fitted with a special filter to enable it to record images in a very narrow spectral range from 4200 nm to 4400 nm—and this is precisely the infrared spectral range in which CO2 can be visualized. For this to work, however, the detector itself must be very cold: -198°C to be precise. For this purpose, there is a Sterling Cooler installed in the camera that generates extremely low temperatures. This takes time; after being switched on the cooler works for about 5 minutes until the detector is cold enough and the camera can be used.

Thanks to a special filter vaporized directly onto the detector, the FLIR GF343 can visualize CO2.

Photographer Armin Vater and his colleague Lasse Brünjes were given an introduction to operating the FLIR GF343 by FLIR Systems in Frankfurt before shooting. They didn’t just learn the typical operating functions of the camera (recording video or still images, changing settings, changing the battery, etc.), but also about some special features that are important to thermography: for example, choosing the right color palette. FLIR cameras offer a selection of palettes that assign a range of colors to the intensity of infrared radiation, making this invisible spectrum visible to the human eye. The palette can simply be monochrome, displaying cold areas as dark grays and black and warm areas as light gray and white. Such palettes are often chosen for thermal imaging cameras used in the security sector as the simple color tones make it easier to detect a person from a distance as a bright white dot among darker surroundings. However, the camera also has other palettes, such as a rainbow palette or the iron color palette, which ranges from white/yellow to dark red/purple. A special High Sensitivity Mode (HSM) enables a particularly clear display of gas emissions, which can be helpful in moving video images.

Working with this thermal imaging camera, however, calls for specialist knowledge. For example, it is not possible to look through glass with the thermal imaging camera, which is why it does not have a glass lens, but one made of the element germanium. By the way, it is also not possible to recognize people or heat signatures through walls, as we sometimes see in Hollywood movies – this is actually pure fiction. 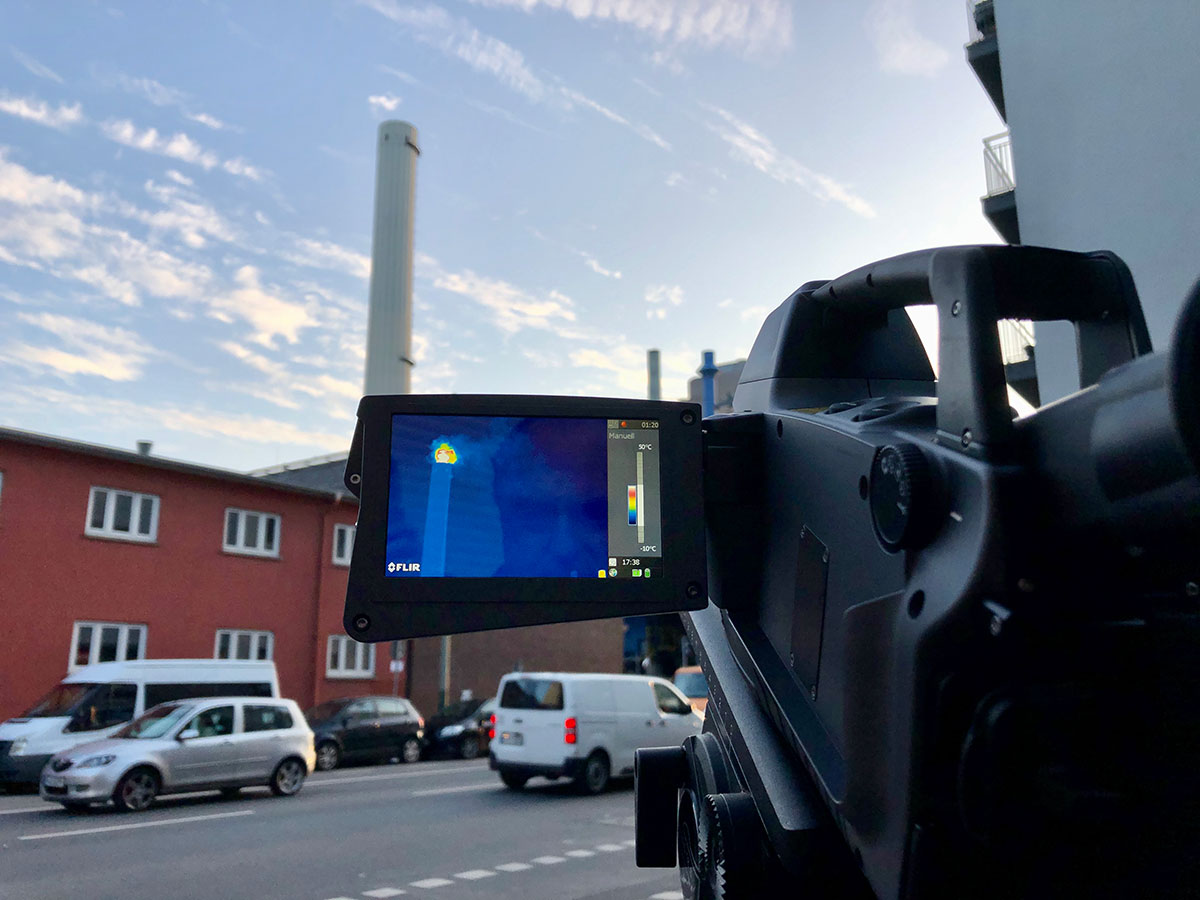 The FLIR GF343 visualizes the CO2 emissions of a chemical plant.

But that wasn’t what the film team from makro wanted to achieve with the FLIR GF343. Instead, cameraman Armin Vater and his colleague Lasse Brünjes filmed the emissions of cars at a busy intersection, the CO2 emissions of airplanes at Frankfurt Airport, the chimneys of a chemical plant and the chimneys of residential buildings – as well as people breathing out. This led to some surprising insights: although a chimney at a chemical plant seemed inactive to the naked eye, the FLIR GF343 showed a clear CO2 plume.

The documentary team wouldn’t reveal more of their findings for this report, but the final broadcast offers more insight on CO2 emissions from manufacturing, travel, and other industries. The makro episode aired in December of 2019 on 3Sat, and will be available to view on-line at the makro media center until 12 December, 2023. For more information on the FLIR GF343, visit flir.com/gf343