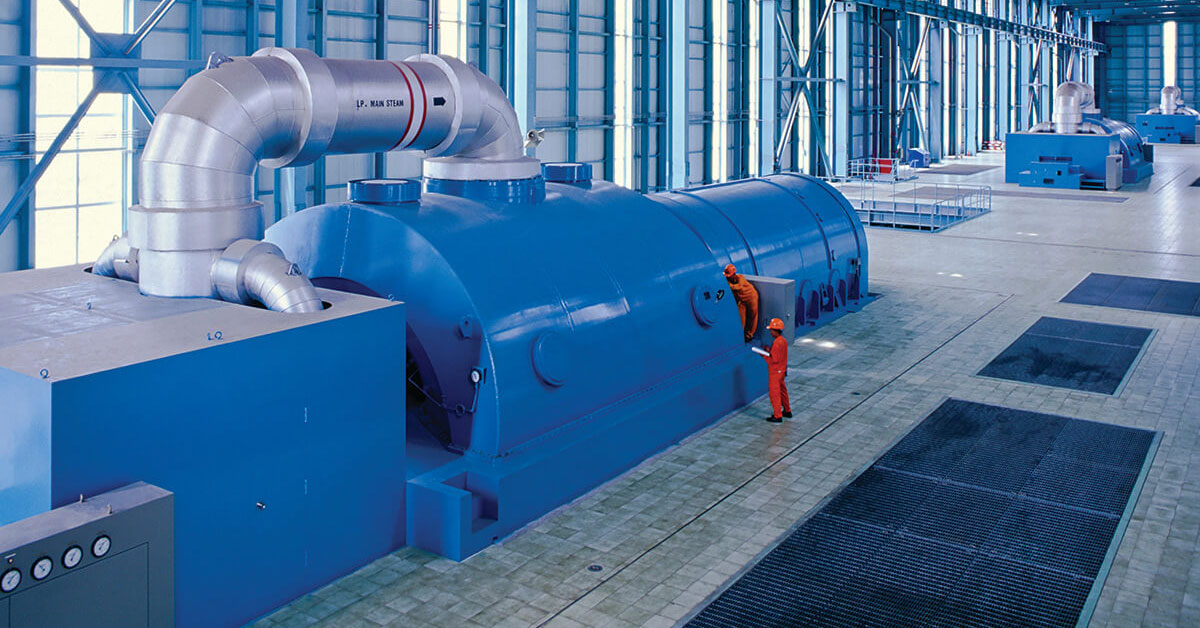 Maintenance of hydrogen-cooled generators is critical for the safe and efficient operation of a power plant. This includes finding and repairing hydrogen leaks from the cooling system, which requires exhaustive searches on components, valves, fittings, or other locations. Unfortunately, traditional methods for hydrogen leak detection cannot reliably pinpoint the exact source of leaks. Optical gas imaging (OGI) cameras that specifically filter for CO2 can greatly improve the efficiency and performance of leak detection, giving utilities the opportunity to efficiently find hydrogen leaks while using CO2 as a tracer gas.

Steam turbine power generators produce large amounts of heat while operating, which must be removed to maintain generator efficiency. Although air, water, and oil have all been used for cooling, gaseous hydrogen’s low density, high specific heat, and thermal conductivity make it a superior generator coolant. Because of its natural abundance, it is relatively inexpensive to use. The use of hydrogen allows power plant operators to produce more energy from smaller generators. Given the minute size of hydrogen atoms and the hundreds of valves and other connections in a generator system, a certain level of hydrogen leakage is considered inevitable and normal. Leaks often occur at gasketed joints such as manway covers on the generator or piping connections; they can also occur at other points in the hydrogen production, storage, or circulation system, such as valves on a hydrogen dryer skid. Higher than normal hydrogen leaks mean that generator maintenance personnel must take extra time to add hydrogen in order to maintain pressure in the system to cool it. The greater concern with large leaks is for safety of plant personnel. As power plant operators monitor hydrogen consumption, a marked increase in consumption typically triggers a leak investigation. Due to hydrogen’s volatility, any change in a generator’s hydrogen usage rate needs to be evaluated and the leak location determined to ensure there are no safety concerns. Mixtures of air and hydrogen can be highly combustible. It’s critical to minimize hydrogen leaks into the atmosphere, particularly as hydrogen may leak into an area that is not well ventilated – posing a high explosion risk. The explosive range of hydrogen in air is broad and requires little energy to ignite; even a spark from a static discharge could ignite gaseous hydrogen in the right circumstances.

Regardless of size, hydrogen leaks are very difficult to find because they are odorless and invisible to the naked eye. Traditional methods for locating leaks on turbine generators can be time consuming and unreliable, leading to an increased risk of unexpected downtime or injury. 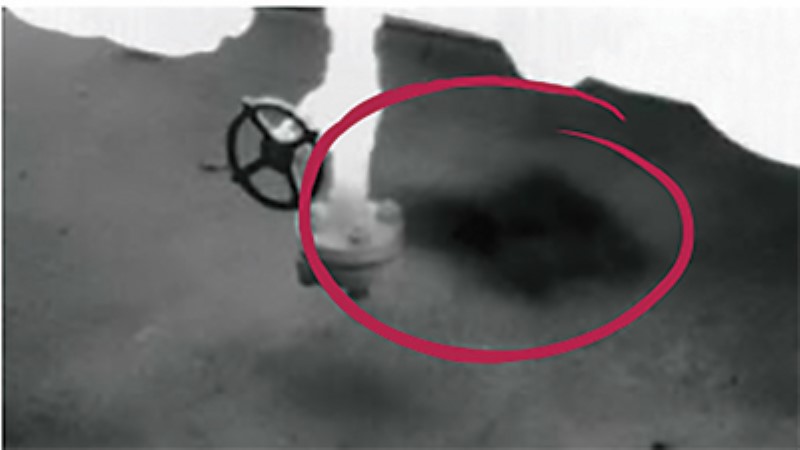 Gas leak from a valve in an industrial facility

For generator maintenance personnel, the first step in keeping hydrogen leaks to an acceptable level is finding them. One of the most lowtech ways to check for leaks is to spray Snoop® liquid leak detector (a mixture of water and a surfactant) or soapy water onto a suspected leak, then look for bubbles of escaping gas. This leak detection method can be frustrating and time-consuming because it requires maintenance personnel to have an idea of where the leaks originate in order to know where to spray. Maintenance personnel can also encounter significant difficulty accessing connections that might be leaking. For many locations, getting close enough to use Snoop or soapy water spray would require setting up and dismantling scaffolding—an extremely time-consuming, costly, and labor-intensive process. Dedicated handheld hydrogen detectors, called “sniffers,” are also often used. While sniffers can quantify a gas leak and determine the concentration of gas, they require great precision and carry many of the same limitations as Snoop. In order to work effectively, these handheld detectors must be placed directly into the gas plume, which can be very small and easy to miss. Optical gas imaging offers a more technologically advanced solution. Some utilities transition to using OGI by adding a small amount of sulfur hexafluoride (SF6) to the hydrogen in an operational system during a planned shutdown. The SF6 tracer gas is added to the system alongside the hydrogen during normal operation, and any leaks are detected by the cameras. These cameras cannot spot hydrogen alone, but they can detect the tracer, even at low concentrations. This method is significantly more precise than using Snoop or sniffers, and it allows maintenance personnel to remain a safe distance away from the generators. The tracer gas SF6 is a greenhouse gas with a significant Global Warming Potential (GWP 23,000), so its use comes with increased regulatory requirements. It is thus not appropriate or costeffective for every power generation application. 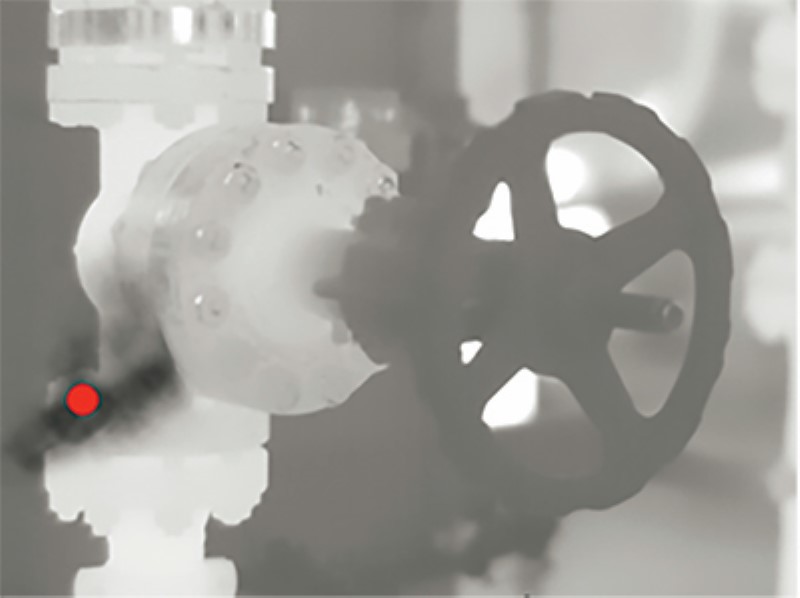 Image of gas leaking from a valve. Optical gas imaging cameras like the FLIR GF343 can be used to inspect for similar leaks in the power utility industry.

Thankfully, SF6 is not the only tracer gas option available for leak detection for hydrogen-cooled systems. Alternative OGI technology, such as the FLIR GF343 camera, can detect carbon dioxide (CO2) leaks at a concentration of 3 to 5 percent. CO2 is readily available at generating stations, is inexpensive, has a much lower GWP, and has far fewer restrictions on its use than SF6. When added directly to the generator alongside hydrogen during normal operation, the carbon dioxide does not impact the purity level of the hydrogen in the turbine or normal cooling operations. The safest and best way to find existing leaks is to purge the system of hydrogen and replace the gas with CO2 during a planned shutdown. This provides a higher concentration of carbon dioxide so leaks are easier to find. The GF343 camera from FLIR uses a Focal Plane Array (FPA) indium antimonide (InSb) detector that is spectrally filtered to be responsive to the infrared absorption bands of CO2 gas. This highly sensitive camera allows easy visualization of CO2 leaks from a safe distance in real time, so plant maintenance personnel can localize small leaks and verify repairs, all while avoiding outages or costly regulatory fines. 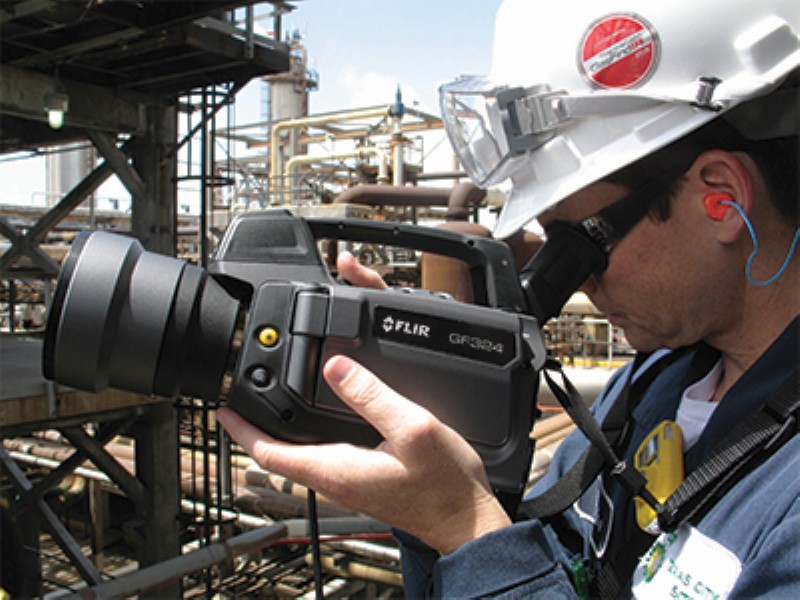 Check for hydrogen leaks from many components in a power generation facility with the GF343 while using CO2 as a tracer gas.

Optical gas imaging cameras offer hydrogen-cooling system maintenance personnel a variety of advantages over traditional leak detection techniques. With these lightweight and portable devices, surveyors can scan broad areas rapidly from varying distances without the need for physical contact with the equipment. They also allow for inspection of areas that are difficult to reach with contact measurement tools, such as the hundreds of connections and fittings within a hydrogen cooling system. Because of the hit-and-miss nature of traditional methods like Snoop and sniffers, there can be times when a serious leak is too difficult to locate while the equipment is online. Finding it may require an unplanned shutdown, which would have a tremendous impact on the utility’s bottom line.

With OGI using the FLIR GF343, equipment can be inspected while it is online in the course of normal operations, avoiding such unplanned outages. The cameras even make it possible to inspect for leaks and make quick repairs in some parts of the system, such as the hydrogen dryer skid, in isolation while the generator itself remains online. Many cameras also collect GPS data tagging on images or videos. This location information can be archived for use when creating work requests for repairs for the next planned generator outage. The stored leak images also allow maintenance personnel to gauge whether a specific leak has worsened over time. Most importantly, the camera system gives personnel the information they need to keep leakage levels at or under the acceptable level so generator operations can continue safely.

Unplanned outages are a costly, unnecessary burden to power generation facilities. Using sensitive optical gas imaging cameras with CO2 as a tracer gas instead of traditional inspection methods, it is possible to visualize hydrogen leaks in real time, monitor them over time, and plan for efficient and cost-effective maintenance. Optical gas imaging cameras deliver the ability to spot leaks and thermal anomalies early, reducing the cost of maintenance and downtime, and potentially saving personnel from serious injury. They deliver all these benefits with greater advantages and fewer headaches than other gas leak-detection methods.