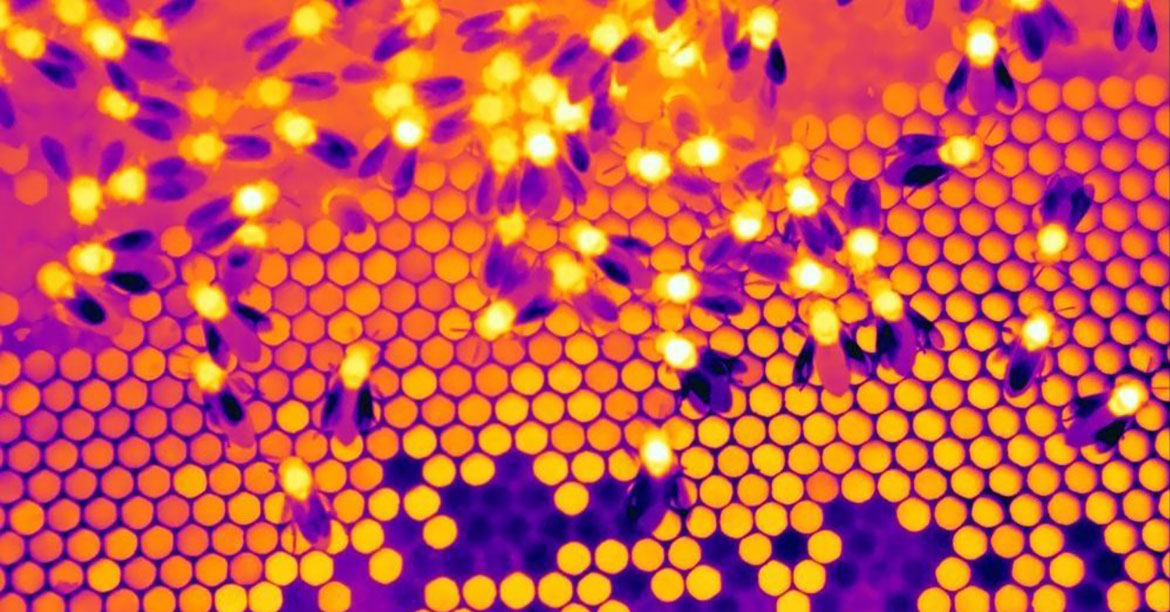 Beekeepers are increasingly turning to thermal imaging to help them care for their bees, especially during winter. Master beekeeper Rusty Burlew, who writes and maintains the beekeeping site Honey Bee Suite, has been using a FLIR ONE for several years, and highly recommends investing in a thermal camera for beekeeping.

“In the past few years, the number of electronic devices for beekeepers has mushroomed,” Burlew says. “I’ve frequently been asked to test these new devices, so I have quite a bit of experience with them. But bottom line, the only one I use on a regular basis is an infrared camera.” 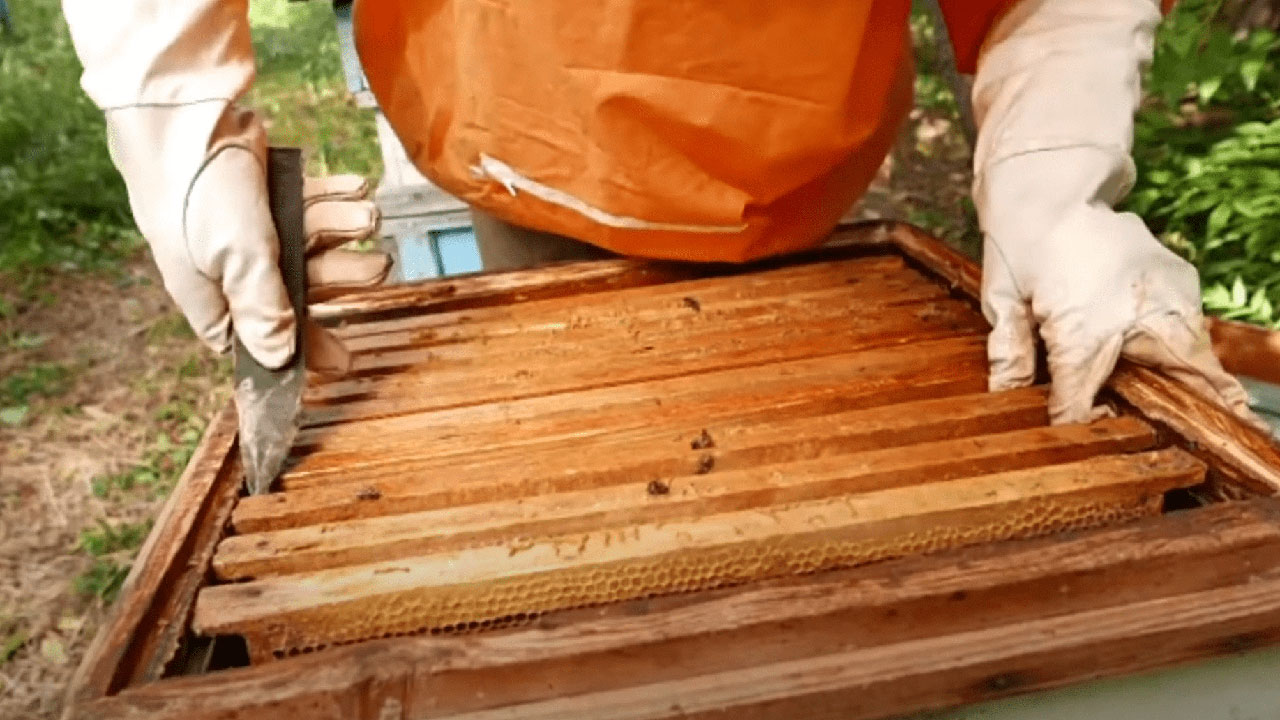 Beekeepers obviously want to avoid opening the hive in winter and losing all the heat that’s inside. But it’s still important to check on the bees. In summertime, bees are scattered throughout the hive, busy with making honey and feeding the young. But in the winter, they gather together in a tight knot called a “cluster” to stay warm. This cluster shows up as a hotspot that can be seen from outside the hive using a thermal camera like the FLIR ONE. 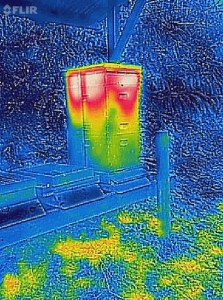 Bee cluster clearly visible at the top of the hive. © Rusty Burlew.

During her first winter with the thermal camera, Burlew took pictures of her hives and discovered that two of the clusters had moved to the top of the hive—a bad sign. In wintertime, bees start at the bottom of the hive and eat their way up through their honey stores. When they reach the top, it means they’re out of food.

Luckily, with the FLIR ONE Burlew was able to see that her hives needed emergency food. “I saved both of them by just giving them feed—sugar water—to keep them going until spring,” she says. “You don’t need to save a lot of bees before you pay for your FLIR camera. The first year I got it I saved two hives, which paid for my camera right there.”

Bee Sure You’re Getting the Best Image

Burlew recommends taking pictures from multiple sides of the hive to help pinpoint exactly where the bees are. She also recommends monitoring hives over time to keep track of where the cluster is and how it’s moving over the winter. “If you are worried about the size of the colony or its movement, you can track it all winter without ever opening the hive,” Burlew says. “You can tell if it’s moving, growing, shrinking, or disappearing.” 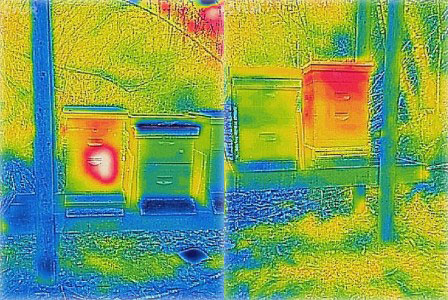 However, it’s not always that easy to see the cluster, as thermal imaging depends on there being a temperature difference to get a clear visual. Because of this, Burlew recommends taking pictures in the early morning or even at night. “Some people have tried it when the sun is blazing down and say they don’t see anything, or they see things that aren’t there… It takes a while to understand.” Even in the winter, sunlight may heat up the outside of a beehive, making the colony inside effectively invisible. Taking thermal pictures before sunrise is a great way around this, as thermal imagers require no visible light to function.

If there’s still no clear differentiation between the cluster and the rest of the hive, Burlew often flips through the different color palettes on the FLIR ONE to see if any palettes produce a clearer image. She recommends trying color palettes that show fine thermal gradient details to get the most information. 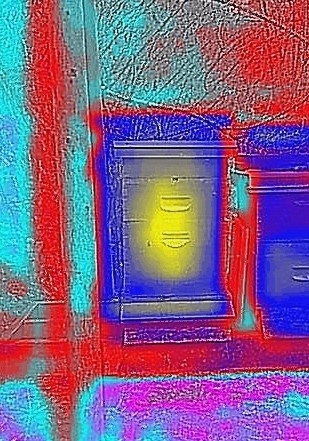 A different color palette may reveal more about what’s going on in the hive. © Rusty Burlew.

Beekeepers can share their photos to a gallery of thermal images that Burlew maintains, which anyone interested in using thermal can study and learn from.

Thermal imaging has primarily caught on for checking on bees during the winter, but Burlew has also found her FLIR ONE useful in summertime. This past summer, for instance, she wanted to check on a hive with a 90lb honey super on top of it. Rather than try and lift the heavy box off the hive, Burlew used her thermal imager to check on the colony.

She has also encountered beekeepers who use thermal cameras in the desert. In that case, the beekeepers were able to use the camera at night (when it gets cold) and see heat escaping from the bottom of the hive and reflecting off the sand. “It was really instructive,” Burlew says. “You always think of hives losing heat through the top, but they can also lose it through the bottom.”

The Buzz About Thermal

Burlew has found the FLIR ONE invaluable for beekeeping. “I hardly know how I kept bees without one. Let’s say you want to add a type of mite treatment and the directions tell you to put it just above or within the cluster. Where’s the cluster? Just take a picture with an IR camera. This type of use keeps the bees warmer because you don’t have to open the hive and start pulling frames. Instead, you know right where to go.” 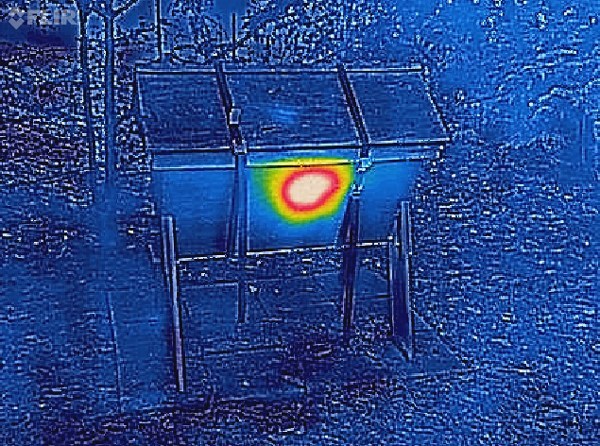 The bee cluster is easily located using the FLIR ONE. © Rusty Burlew.

Beekeepers might also uncover some strange things when they look at their hives in thermal. One of Burlew’s favorite thermal images was sent to her by another beekeeper who took a photo of her hive in winter. The cluster was clearly visible in the middle of the hive, but in the lower left-hand corner was another, smaller heat source. When she investigated, she discovered a mouse nest inside the hive. Luckily, she was able to remove the nest before the mice did any significant damage.

“If you see something weird in your photo, don’t blame the camera,” Burlew advises. “Instead, open that hive the first chance you get.”

Burlew’s husband also takes advantage of the FLIR ONE, using it to find studs or water pipes in the walls and check for faulty electrical connections. (He asks for permission before using it, though.)

Does the Future of Beekeeping Include Thermal?

Rusty Burlew things so. “I think there definitely is a future in this. It’s helped me tremendously,” she says. “There’s no one piece of equipment that for the money will give you as much information.”

In addition to writing and maintaining Honey Bee Suite, Rusty Burlew writes articles for bee publications and frequently speaks to groups about bees and other pollinators. Read her article Thermal Imaging for Beekeepers for more information about using thermal imaging for beekeeping.