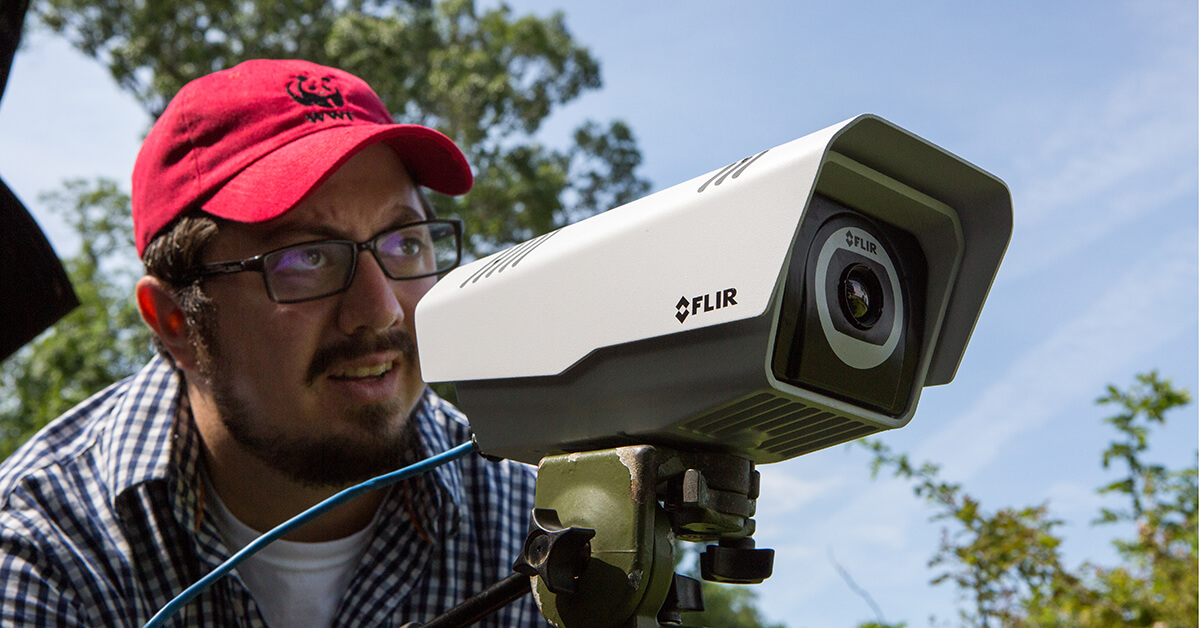 Teledyne FLIR has worked with the WWF since 2016, providing equipment such as fix-mounted security cameras, truck-mounted cameras, and handheld thermal cameras, along with engineering and technical support. This partnership has led to the arrest of hundreds of poachers since 2016, and the success of the program has led to widespread deployment of FLIR thermal imaging cameras at parks and private land across Kenya and other African nations including Zambia.

Loucks has been with WWF since 1996 and is now running its Wildlife Crime Technology Project which focuses on harnessing cutting-edge technologies to protect wildlife and communities from environmental threats, including poaching. He also led conservation planning projects across North America the eastern Himalayas of Nepal and Bhutan, Indochina, and China.

Recently, Teledyne FLIR donated 100 new FLIR Scion OTM Thermal Monocular cameras to aid the WWF’s efforts to stop wildlife poaching in Kenya. These cameras not only enable rangers to see farther at night, but also capture photos with geotagging to improve coordination while keeping themselves safe from potential threats.

We asked the pair about how they came to work with Teledyne FLIR, what surprising things they learned through the collaboration, and what’s coming next.

Q: How did you come to work with Teledyne FLIR?

Becker – “We were looking for any kind of tech that we could deploy for anti-poaching, beyond our first step with drones. From there we saw that the thermal cameras could provide that important contrast for the analytics system where we could have a computer tell us what's in front of the camera. The contrast in the thermal image for the human makes it easy to use. We just saw that it would have an impact even beyond just normal night vision (near infrared imaging), including the image intensification. That's how we began focusing in on the thermal.

Even other technologies including radar or the acoustic gunshot sensors, a lot of those still relied on some layer of camera systems. For gunshot sensors, they would trigger, and like a radar, would find motion and they would point a camera at whatever it was to figure out what was going on. Since most of the threats happen at night, those systems always relied on a thermal camera to actually tell you what's going on. We just realized that we could cut a lot of the costs by just focusing in on the thermal cameras. For perimeter detection, we could get the most bang for our buck and deploy the least amount of towers because we could spread our sensors out thanks to the range Teledyne FLIR thermal cameras provided in all types of conditions.”

Q: What has your experience working with Teledyne FLIR been like in terms of training or support logistics?

Becker - “As soon as it became a more formal collaboration with FLIR, that really opened up the engineering support. Teledyne FLIR really filled in a gap where I've had several calls with the tech support teams. Just working through our various issues, they're providing latitude training, providing analytics training, always jumping on remote video calls. All of our sites are remote, so I'm remoting in from the US, and the FLIR support teams are remoting in just so we can enable these rangers on the ground who are in the middle of nowhere to utilize these high-tech tools. The remote support and knowledge of FLIR engineers has made our efforts in Africa more  sustainable.”

Loucks - “We’ve run into a problem in the past trying to just get through the import/export regulations to get the equipment into Kenya, which we're not really set up for. We're not an import/export company. We're an NGO (non-governmental organization). That's something that's taken months to do. With the FLIR Scions, I think FLIR got them in to Kenya Wildlife Services (KWS) within less than a month. That would be a record time for anything I've tried to do through a different process, so that was super useful. I also would say that even at the initial scoping phase, we’ve worked with (FLIR) for a number of years to identify and design the work we are doing—which led to the 2019 launch of  Kifaru Rising (Kifaru means “rhino” in Swahili), which was the $3 million, three-to-four year partnership.

As we were preparing for that, Eric went with one of Teledyne FLIR’s engineers to Kenya for about three weeks. They went to every single site (11 in total) and they mapped out what we needed and then you're getting that invaluable expertise because that's what he did for Teledyne FLIR customers. Making him available at the outset and then throughout it, was crucial. He also went to Ol Pejeta Conservancy with us in Kenya, later on, to finalize plans and help troubleshoot problems that inevitably come up.”

Q: Was there anything that surprised you or anything that you didn’t expect until the Teledyne FLIR technology was installed and implemented?

Becker - “There was a donkey theft captured on the lake, Lake Nakuru National Park, in Kenya. The rangers were able to identify where that happened through the FLIR perimeter  system,  They were able to engage with the community and the community saw the benefit of having this type of security system and saw a lot of value working with the park rangers.

There was also a hit-and-run accident where there was property damage on one of the houses in the community around the national park. Again, they were able to use that footage to identify the vehicle. Originally, the community was suspicious about the system and was very hands-off about working with KWS before that had happened. Really after the donkey incident, the community saw the value in interacting with KWS and saw that the system wasn’t just there to spy on the community. It really opened up this line of communication that didn’t really exist prior. That was an outcome that we never really expected from that system.

There was also a herd of elephants displaced in northern Kenya by wildfires. As they were moving, they were just hammering the local communities’ gardens. There was a lot of human-elephant conflict that had been going on for a couple months and KWS hadn't been able to locate the herd to move them back. Coincidentally, during a remote training session with FLIR’s Ramon Duran, one of the Teledyne FLIR engineers, this ‘missing’ group of elephants walked in front of our cameras and a whole bunch of the IT staff commented on how weird it was because they were on the community side of the fence—and not in the reserve. So they radioed the wildlife rangers, and found out that it was this displaced herd that was causing conflict. They called KWS, who responded to help the community. It  was just another example where the FLIR perimeter system helped the community, just by chance because we were doing a remote training and they were able to then respond in real-time.”

Q: What's happening for you guys now in the field?

Loucks - “Our latest project in Kenya, Ol Pejeta Conservancy, is live and the analytics are all configured, so it's generating alerts. I think the system has been operational for about a year now. It's the biggest system we've done so far. We buried 10 kilometers of fiber optic cables and we hired a hundred or so community members for 10 weeks to dig this trench. When COVID happened it basically nixed any of my travel, so all the work had to be implemented through our local partners. We really focused on training up the IT team at Ol Pejeta and really made them experts from building out the infrastructure, installing the Teledyne FLIR stuff, configuring it, and then training the rangers on operating the system. So now we'll use the Ol Pejeta system as our baseline for training. We're also going to be working through the Ol Pejeta team and the KWS IT staff to install the system at Solio Ranch, a privately owned wildlife conservancy, which is our next big collaboration with FLIR on a perimeter security system.

For more about all the work Teledyne FLIR and WWF are doing to help protect wildlife and local communities in Kenya and Zambia, visit: https://www.flir.com/corporate/wwf/

Curious about the type of Teledyne FLIR equipment WWF is deploying on the ground in Africa? Click here for details on Teledyne FLIR perimeter detection capabilities.