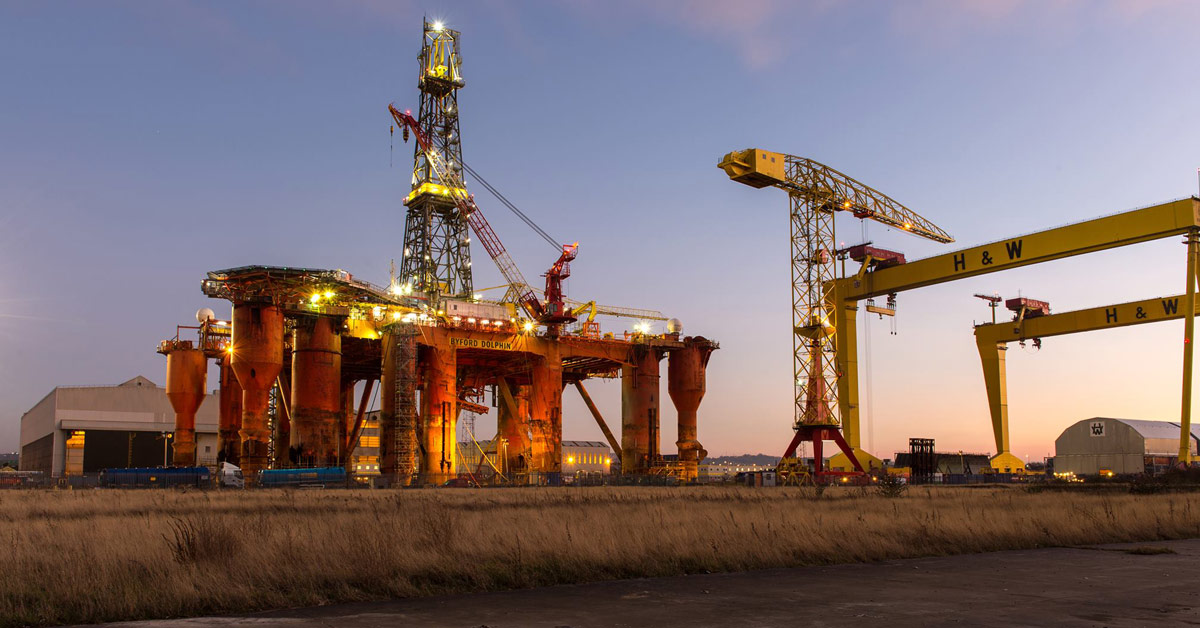 As prominent in Belfast’s history as its cranes are on the city’s skyline, it’s hard to imagine Belfast without Harland and Wolff. Once the world’s greatest shipbuilder, Harland and Wolff today has evolved into a company that provides over 150 years of engineering excellence to the maritime, offshore, and renewable energy sectors.

The Harland and Wolff facilities on Queen’s Island are now used to maintain some of the world’s largest ocean-going vessels, ranging from offshore platforms and cruise liners to offshore wind farms. The company is spread over two sites in Belfast and covers over 200 acres. Its main facility has a public-facing perimeter of no less than 1.5 kilometers. With safety as a primary consideration in the execution of projects, the company goes to great lengths to protect its investments from unwanted visitors, intruders, and vandalism.

But with the increasing development of Queen's Island as an industrial, commercial, and tourist area came a greater public presence and an increased safety and security threat. That is why in recent years Harland and Wolff has been continuously investing in the latest security camera technology from FLIR, including enterprise security cameras, PTZ cameras, intelligent thermal cameras, and mobile and wearable cameras.

“Today, over 140 FLIR cameras on-site and along the site’s perimeter make sure that we can detect any irregularity,” said Chris Neill, security operations manager at Harland and Wolff. “Whenever one of our cameras picks up an incident – an intruder for example – an alarm is generated and sent to our security control room, who can then follow up the incident. This ensures us that our investment and that of our customers is safe and secure at all times.”

Due to the high impact and risk associated to a possible incident on site, the company’s security department follows a proactive approach for possible intruders. Even in complete darkness, in perimeter areas where there is no additional lighting, thermal analytic cameras can pick up the presence of intruders, animals, or vehicles automatically based on their heat signatures. While thermal camera footage does not allow actual identification of intruders, it can still be used as evidence for insurance companies or law enforcers, especially when an intrusion pattern can be seen over different cameras.

Over 140 FLIR cameras are installed across the two Harland & Wolff sites in Belfast.

United VMS is FLIR’s enterprise-level software solution for video surveillance operations. The software is currently used at Harland and Wolff by four control room operators and eight managers, all of which have dedicated user

rights. One of the strengths of the United VMS system is that it can connect with nearly any security camera on the market and that video streams and detection alerts can be presented on any screen, be it on a video wall, a PC, or a smartphone.

But Harland and Wolff has been using United VMS for far more applications. “We also use the United VMS platform to monitor alarms coming from fire sensors on oil rigs, for example,” said Neill. “Another example is the detection of failed pumps on one of our drydocks. This information also comes in on United VMS, where we generate alarms and notify key staff in real time.”

Harland and Wolff has indeed managed to make use of United VMS's flexibility and deploy it for much more than security applications only. "We are not in a static business," said Neill. "At Harland and Wolff, we are always taking on new challenges and solving new problems; FLIR’s United VMS platform helps us do that.”

The FLIR United VMS platform can connect with nearly any security camera.

Security as a Commitment

“Our yellow gantry cranes have become a national icon,” said Neill. “Unfortunately, this also means that they are an attractive target for political messages or, as in the past, terrorism. As a port facility, Harland and Wolff needs to comply with a minimum security level imposed by the UK Department of Transport. But in reality, we always exceed these requirements. We owe this to our continuous investments in security technology, which we also consider as a commitment to our customers.”

Maybe this is what connects Harland and Wolff with FLIR. “As committed as we are to our customers, we expect the same from our suppliers as well,” said Neill. “As someone with a technical background, I have always been convinced of the quality of FLIR security products. But there will always be a time when you need to rely on technical support, and that’s where FLIR really makes a difference.”