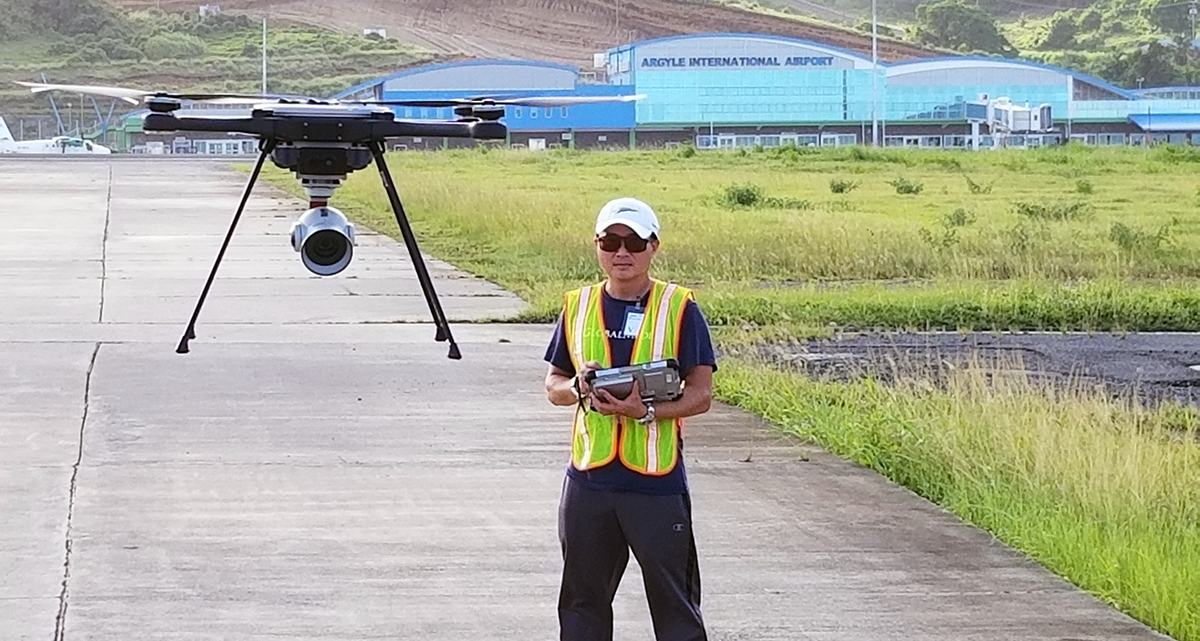 On September 2, 2021, Teledyne FLIR deployed a SkyRanger R70 UAV with GlobalMedic, a Toronto based disaster relief non-profit organization, to help map the island of Saint Vincent after the April volcanic eruption of La Soufrière.

Teledyne FLIR’s Andrew Huang, a Senior Manager of Software & Systems Test Engineering, based in Waterloo, Ontario, has been supporting UAV disaster relief efforts for years. Equipped with the SkyRanger R70,  Andrew and the GlobalMedic RescUAV team worked with Sabato Caesar, Saint Vincent Minister’s of Agriculture, to map large areas of agricultural land and critical infrastructure around the island. This provided invaluable data for the government to understand the impact of volcanic ash and lahar flows damaging the country’s food supply and economy.

In conjunction with photo stitching tools such as Pix4D and DroneDeploy, thousands of hectares of orthomosaic maps were produced and presented to the Agricultural Ministry. According to Minister Caesar, the high-resolution maps have provided the government with critical crop production data that would have otherwise taken decades to compile. The information gathered by our UAV technology is helping to expedite St. Vincent’s economic recovery, and lay the groundwork for a stronger and more robust economy.

The SkyRanger R70 captured data flying at 400 feet above ground level (AGL) with 75 percent front and side overlap at speeds up to 50km/h.  The resolution provided enough detail for analysts to see what crops are planted on each farm, and where farmers can mobilize the island's limited heavy farming equipment to recover fields covered by volcanic ash.  The data can also assist the government to validate their agricultural census and understand the island’s farming inventory to help rebuild the economy.

The impact of lahar flows and volcanic ash on the towns surrounding the highest risk areas of the volcano were clearly captured by the SkyRanger R70 to show changes in the riverways that run from the hills and cut through the towns and into the ocean.

Using the images captured by the SkyRanger R70 and orthomosaic maps created, city planners are now able to easily determine whether it is safe for people to rebuild their homes in the same location where it was lost.  Unfortunately for some, this means a permanent relocation of their home, but will prevent future loss should the volcano erupt again.

Planning for the future: In addition to studying and understanding the agricultural impact of La Soufrière on the island of Saint Vincent, GlobalMedic was asked to map critical infrastructure such as the island's seaports, power plant, and international airport.  With permission from airport authorities, the SkyRanger R70 was able to map Argyle International Airport (SVD), which was opened in February 2017.  This provided the government and airport authorities very detailed views of the airport infrastructure and land surrounding the airport.  Over time, they can compare against these records to check for erosion of the coastline, and should there be any future natural disasters, the maps will be able to show what the infrastructure looked like prior to any damage.

The SkyRanger family of UAVs have been deployed with GlobalMedic after earthquakes, hurricanes, landslides, and now has experienced deployment to understand the agricultural impact of a volcanic eruption.  With its all-weather capability, it continues to serve as a reliable and effective tool to help protect lives and livelihoods by helping people around the world recover from a wide array of natural disasters.

Andrew with the SkyRanger R70